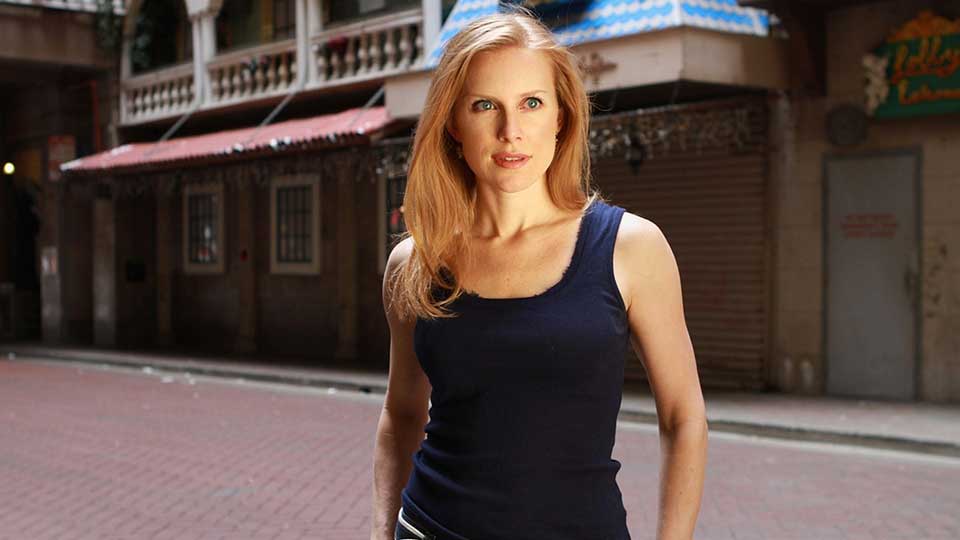 As you know by now we’re more than a little bit obsessed by web series Bloomers.

The second season has had us gripped, laughing and desperate for Wednesdays to come round every week. This week we caught up with Kirstin Barker who plays uptight, but evolving, Clarissa in the show.

In our interview we talk about the surprising direction for Clarissa this season, family drama with on-screen sister Karen and Kristin’s hopes for the future.

I should be working, as I sit here in my office, writing responses to your questions, but alas! Your interview is the best way to procrastinate from my day job as a marketing professional.

This week’s episode of Bloomers was centred on your character Clarissa. What was that like?

YAY ME! Just kidding. I feel a huge responsibility to this character and her journey, as it’s a large departure from where she was last season. What she’s embarking on in this episode is something that has the potential to resonate with people who are experiencing similar “fight or flight” symptoms with their own emotions. Watching the episode felt a little like a hostage situation – like I was bound to a chair with nothing to do but hope that I did my job.

Season two has seen some unexpected changes for Clarissa. What was your reaction when you found out the direction for your character this season?

Initially, I was strongly opposed to the direction that she was going. I felt like the first season defined Clarissa as an opinionated, conservative woman. The idea that she would suddenly pursue an interest in women came so far out of left field that I thought it wouldn’t be believable because it didn’t align with the person that Season One introduced.

I warmed to the idea by speaking with lesbian friends of mine and asking them, “Do you know women like this?” I was shocked to learn that all of them either knew someone or had been Clarissa in this point of her life themselves – moderate in beliefs and life experience, but unable to suppress their sexuality. These conversations ultimately gave me the confidence in the storyline.

We loved in the episode how Clarissa had Brooke nearby to help her get through her date. Have you ever had your friends help you through a date?

I don ‘t think we treated it like a covert op, but I know there were some “silent three way call conversations” back in high school. You know, where you have your friend call you first and then, you stay quiet on the line while she/he calls the boy of your dreams and tries to get him to tell her if he likes you? Yeah. That happened.

In what ways, if any, do you relate to Clarissa? Do you share any similarities?

When I’m working on Clarissa, I tend to bring my own harsh critic to the party. I think that we both set an extremely high expectation level for ourselves, to the point of ridiculousness, and when we fall short, we’re extremely hard on ourselves. I say ridiculous because I have this odd belief that I should be able to immediately perfect anything that I attempt, even if I’ve never done it before. (Ask Matt Palazzolo about my stint doing parkour.)

During the show’s first season Clarissa had to try and reconnect with her sister Karen. This season the two characters are still navigating their relationship. What can we expect from that storyline?

This season, Clarissa and Karen are living together. I think Clarissa’s immediately and effortlessly stepped back into the maternal, older sister role, which has to add to Karen’s stress level. That being said, I think Season Two reveals how much they rely on each other and, despite their differences, share the sibling dynamic of them against the world.

What’s it like to work with Holly Holstein? We spoke to her recently about how outrageous her character Karen is and she claims she’s nothing like her. Is that true?

Completely and utterly true. I cannot stress enough how true that statement is. But what’s amazing about Holly is that she’s always able to go there. She’s not self-conscious at all about the physical and emotional demands of the role. She’s so tuned in to who Karen is, she’s constantly making choices as an actress that reflect the mannerisms of this person who is the polar opposite of herself in real life.

Tell us how you first got involved with Bloomers.

I was in an acting class at Ivana Chubbuck Studio with Matt and Fernanda. Matt approached me, after seeing a scene that I did with Fernanda where I played an uptight woman in serious need of release. Initially, Matt thought that I should be cast as Ann Coulter….but since he wasn’t writing her biopic, he asked me to read for Clarissa instead. It was and continues to be something that I’m proud to be a part of, as aside from class, it’s my only tie to the acting world.

What would you like to see Clarissa get up to on the series in the future?

I hope that Matt continues to throw her into bigger physical and emotional challenges that test her perspective. I love how she continues to evolve with every new experience and every little change causes a huge vibration in her world. I’ll be very gluttonous and say, “More! More! More of everything!”

I am getting married in October, which is so exciting. A lot of the work that went into Clarissa this season included elements of my relationship and to see them play out on screen, while experiencing something so wonderful on this side of the fence has been a beautiful parallel for me to watch.

Stay up-to-date with Bloomers by heading over to www.bloomerstheseries.com. Watch the latest episode The Whole Truth below:

In this article:Bloomers, Kristin Barker