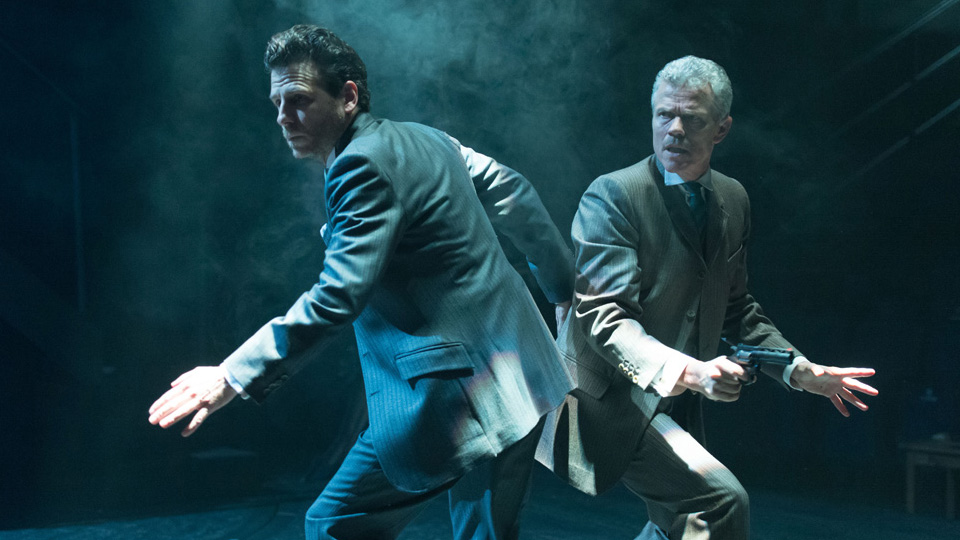 Sherlock Holmes is an icon of literature, instantly recognisable with his deerstalker cap, spyglass and pipe. Accompanied by his faithful assistant Dr. Watson, both characters have appeared in plays, radio shows, films and television series in dozens of languages. This month, the West Yorkshire Playhouse offers its own take on the famous detective, in a new piece of writing from Mark Catley based on the characters originally created by Sir Arthur Conan Doyle.

The story begins shortly after Holmes has tumbled over the Reichenbach Falls in a final confrontation with his arch nemesis, Professor Moriarty. Recovering in his flat in Baker Street, Holmes vows to retire from investigating, retreating into stupors of drunkenness. His senses are reawakened when his brother, Mycroft, is embroiled in treason and sent to the gallows. Aided by Dr. Watson and his old associate Irene Adler, the trio set out to prove Mycroft’s innocence, but end up embroiled in a plot which soon spells destruction for them all.

Structured like a traditional Holmes tale, the show re-establishes Holmes’ background for audiences unfamiliar with previous adventures and develops very much in the Conan Doyle vein, providing a true sense of authenticity. It is evident, however, that Catley’s script and Nikolai Foster’s direction borrow much from previous adaptations of Sherlock Holmes, agreeably bringing together the pace and humour of the current BBC re-imagining, with a spirit of adventure and action inspired by the Hollywood versions of recent years. The story is highly engaged with technology and magic, mirroring the industrial revolution taking place in that period whilst also providing a new level of complexity and gadgetry which perhaps leans more towards the fantasy of Doctor Who than classic Holmes, but many will find this influence welcome as both characters have more than a passing similarity. The abundance of magic tricks and technical gags make for a visually busy show on stage and add value to a story which is less complex than it truly appears; it is more a series of complex set pieces which window-dress a simple plot, allowing Holmes’ to showcase his skills of deduction and, of course, win out in a closing statement at the end. No surprise and not a spoiler, this is formulaic fare but at its very best.

Holmes himself is a well-rounded adaptation from the world of Conan Doyle’s books. Catley’s dialogue has an authentic quality, balancing eccentricity and intellect. Importantly Holmes is also presented as fun figure, attractive and interesting despite his darker side – which is also examined in a beautiful dream sequence. Jason Durr’s portrayal is equally well pitched, drawing elements from Jeremy Brett’s heightened portrayal with dashes of Cumberbatch’s wild eccentricity. Durr brings a swarve, youthful layer to Holmes, capturing an energy and eagerness which works well on stage. Different from any Sherlock seen before but instantly recognisable, Durr’s incarnation is highly successful, engaging and wholly authentic.

Dr. Watson is played with an earnest warmth by Andrew Hall, demonstrating the character’s moral centre perfectly. As the butt of several jokes, Hall maintains Watson’s integrity without the danger of him seeming like a clown. In a larger comedy role is Victor McGuire as Inspector Lestrade, a wonderful parody of a typical big-booted policeman. Tanya Franks has a fascinating seductive allure as Irene Adler and Andrew Langtree’s journalist provides an agreeable element of farce in his frantic movements. A particular highlight is Adrian Lukis’ Mycroft, played with a child-like tenderness which is genuinely moving. Lukis and Durr offset each other superbly and their scenes together are both hilarious, captivating and deeply emotional.

Aesthetically The Best Kept Secret feels very much like a stylized movie on stage, with steampunk influences depicting a brutal Victorian London. Dressed and lit with the level of craftsmanship expected of the West End, the show presents its period and setting with vivid texture. Framed with girders and acted out on a cobbled street under a candle-lit smog, the grim streets of Jack the Ripper’s London are given added dimension by orchestral sound cues which jolt audiences at every turn.

The difficulty with any great franchise such as Holmes is that viewers will have a predetermined concept of what Holmes should be and a re-interpretation such as The Best Kept Secret is open to direct comparisons which can be a disadvantage. Countering that, the West Yorkshire Playhouse are destined to sell out with this production as the brand alone will provide a powerful draw. The added showmanship of live magic tricks from Scott Penrose will also impress audiences of all ages, engaging younger viewers in the power of live performance. Holmes, like Doctor Who and James Bond, will forever be realised in perfection through individual subjection, and for some The Best Kept Secret may well present the definitive Holmes.

Written sympathetically for fans of Conan Doyle whilst also appealing to a new, modern generation, there is much to enjoy and discover in The Best Kept Secret. With some ingenious set pieces and a continually playful humour, it is decidedly cutting edge. Visually stunning and narratively engaging, the play gives audiences a huge, impressive show at tremendous value. The closing moments will leave audiences surprised, delighted and wondering just how it was done, whilst equally providing a tantalizing cliff-hanger to future adventures.