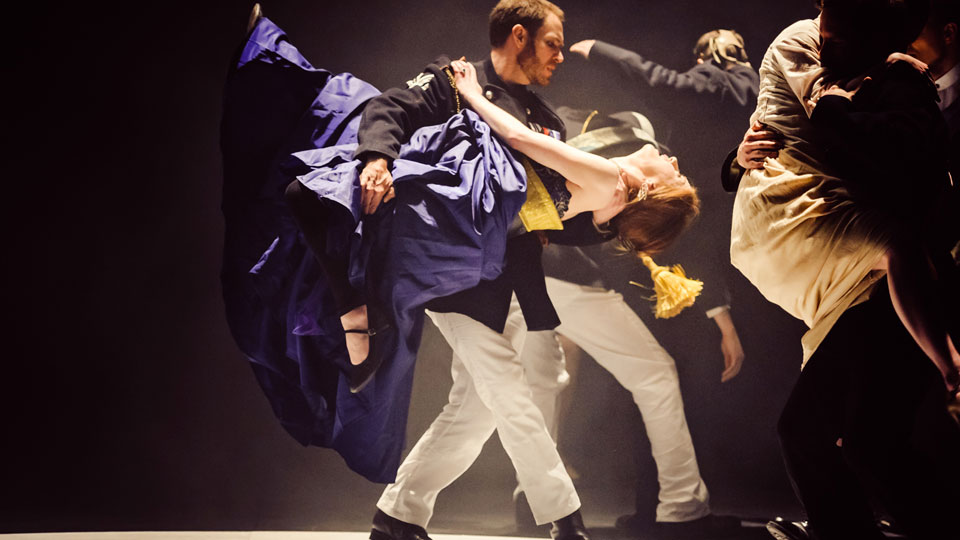 Shakespeare’s King Lear, a tragedy of warring families, madness and old age is given a unique twist in this production by the casting of a young woman in the title role, which results in a major reappraisal of the themes.

Chances are you won’t have seen a Lear quite like this one. Not only does the inverted central casting give it a fresh, and at first, oddly unsettling angle; but the action is played out against a backdrop of spectacular theatrics and vivid lighting – with the occasional sound effect thrown in to make you jump out of your seat.

Those familiar with the work of Lazarus Theatre Company will see many of their trademarks in evidence. Sumptuous costumes and beautiful lighting (designed by Rachel Smith) combine to create arresting images; and the minimal set and stylistic artifice (actors often wait in full view by the side of the stage) often seen through a dream-like layer of smoke bring to life a very elegant production. Director Ricky Dukes frames each scene almost like a film: the whole thing is exceptionally easy on the eye.

There are some nods to unexpected genres thrown in: the act one climax (OK, I won’t give the game away) is like something out of a science-fiction film, and the well-known [though this is a spoiler] scene in which Gloucester’s eyes are ripped out is pure modern horror – with the stage lit purely by the flashlights of his torturers. Such inspired and inventive moments will live in the memory afterwards.

The torture of Gloucester (Robin Holden). Photo by Adam Trigg.

Many of the established Lazarus repertory actors shine in King Lear. Robin Holden, seen earlier in the season as a brash and youthfully impetuous Oedipus, proves his versatility by seeming decades older and almost unrecognisable as a bluff Gloucester, giving him a Scottish accent and paternal warmth. Alice Brown, concurrently playing the lead in Dido, Queen of Carthage, is a lot of fun to watch as the scheming Regan.

Other standout performances are from Danny Solomon as Kent, who alternates gravity and comedy when he needs to; and Harper James as Edgar, whose transition from the innocent wronged brother to near-naked babbling madman covered in mud (it’s all in the text…) is commendably handled.

As for the lead actor, Jennifer Shakesby, who is reprising the role after a rather different 2012 production, is solid. This longer version sees her pinpoint Lear’s transition from dignified monarch to madness with warning signs along the way, occasionally defying expectations with varied moments of stillness and anger. Shakesby is, ultimately, a sympathetic Lear.

Whilst the production runs to two hours, there is an hour or so of Shakespeare’s material that is cut. Thus it’s sad to see no Fool here, necessitating a more serious Lear; and the ending focuses on Lear and Cordelia; so we don’t get to see the bastard (literally) Edmund get his comeuppance. The text that is played nevertheless gives the actors plenty to work with. No time is lost in transitions between scenes, which are slickly handled, and the story is told with clarity.

King Lear plays at Greenwich Theatre until 1st June, alternating with Dido, Queen of Carthage. You can book tickets for both through the Greenwich Theatre website. Check out our interviews with members of the Lazarus crew.