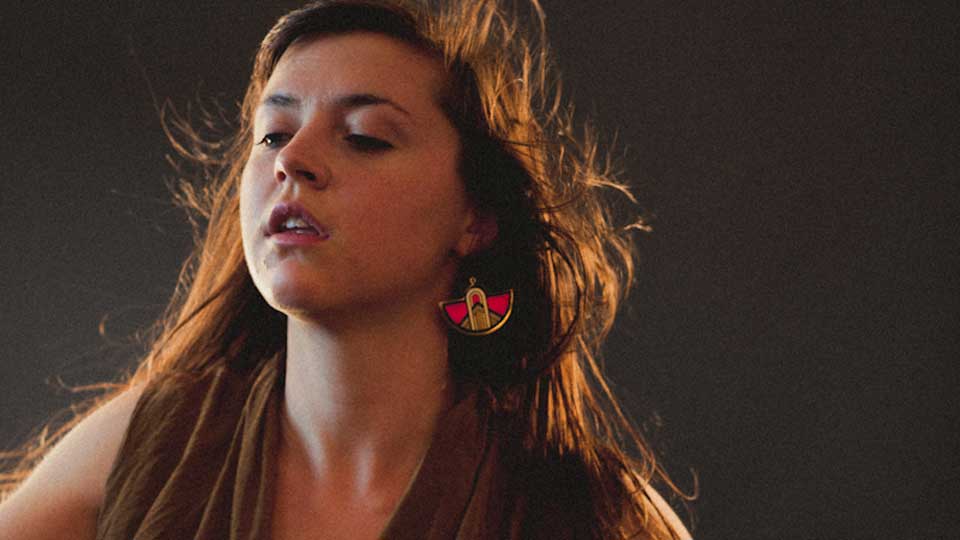 Lovelace is the performing name of Rebecca Whitbread, a charming and unique voice on the London singer-songwriter scene, who is slowly building a name for herself with her intimate, arresting live shows.

Having just released her debut EP, Yet This Time, she sat down with us to talk about her ‘American Odyssey’ and eternal love of ‘The Sound of Music’!

Much to our disappointment, your birth certificate does not list your given name as Lovelace. Can you tell us how the name came about, and what it’s come to mean to you?

At Burning Man Festival you are asked to make up a new name, your ‘playa name’, and following the other leads in the camp (ie. Dirty Duchess, Cardinal Sins) I became Lucy Lovelace, the naughty little maid. Funnily enough the name stuck and it became my nickname after moving to San Francisco.  It was at that very Burning Man I woke one morning before sunrise to the sound of musicians playing in our camp and joined them on a 4 hour jam on the top of our converted school-bus/pirate-ship, ‘The Dodo’.  This is where I had my musical ‘road to Damascus’; singing for hours and hours, improvising. It was then that a new voice came out…

Which artist first inspired you to start songwriting? Who did you grow up listening to?

The obvious ones – Kate Bush, Patti Smith…  I grew up listening to The Who and The Stones, but actually I think my experience singing in musicals since I was a kid, knowing all the words to every song in ‘The Sound of Music’ and my family singing Tom Lehrer around the piano were probably my biggest influences!

You say you ‘never meant to make this EP’- please elaborate on this – does that mean that you never intended to be a solo musician?

I trained as an actress and discovered music later.  I went to the States the first time and decided I would just tell everyone I was a musician, even though I didn’t necessarily feel qualified to say this.  I had no idea I would find my musicality in such a visceral, life-changing way.  I never thought I would come away with my own EP of songs I felt came straight from me, in the space of just 6 months!

You’ve said that your new EP was the outcome of an American Odyssey – tell us about this odyssey. How did it start? Where did you travel? What were seeking?

My all-American Odyssey started on an impulse buy.  I bought a last minute ticket through a new acquaintance (actually, a clown who I’d met at a clowning workshop). He introduced me to some people setting up a Baroque-themed wedding camp, which I helped organise via the internet. The camp was an add-on to a much larger Baroque themed camp, ‘Monticello’, where the participants wore powdered wigs and spoke in faux English accents.

At Burning Man, I met an American singer/songwriter and started writing songs with him there and then, performing at Burning Man and later in San Fran.  I went with him to LA on the basis we would start writing music together more seriously, but lost him to a cult.  Things got a little dark, but I shan’t go into that.

I headed back to San Fran on the basis of a party invitation, and moved straight into a sublet in the Mission District (which was an artists’ warehouse above a motor cycle shop).  It was here I met Hamilton Ulmer (of Makeunder), who was to become my mentor, muse and love.  What was only supposed to be a 3 week vacation turned into a 3 month discovery in music and my voice as a songwriter.

The EP was created between San Francisco and London – tell us more about this.

The EP was mostly written in San Fran (and produced by Hamilton Ulmer).  After a second, nearly 3 month stint in ‘Frisco, I came back to London in the spring of last year and started renting a studio in Hoxton.  It was here I worked further on the EP, and started a collaboration with Andy Bird, who became my drummer on the EP. It was all mixed and mastered here in London.

Your songs are dreamy and ethereal, and a listener can easily see how California has impacted on its production and feel. How would you say London has influenced the songs and your songwriting?

I’ve lived in London for 9 years, but my Devon upbringing features heavily in my songs.  Especially in the song ‘Yet This Time’, written about a winter walk taken on a beach in Devon overlooked by its famous red cliffs.  ‘Maps’ takes in a lot of the vastness and epic nature of California.  It was also about the distance I felt between myself and my then boyfriend, Hamilton.  The dramatic quality of the Californian coast definitely comes into play in this song (and other songs since).  When you’re far from the person you love, landscape seems to play a big role.  I remember a feeling I had flying over mountains and huge lakes (I think it was in Utah), flying away from ‘Frisco and the life I had made for myself there.

London certainly impacts on my songwriting.  Although I spent a lot of time not accepting I was back here, I now feel so happy to be here and am experiencing this city again afresh.  The excitement and homeliness I feel here is coming out more and more in my songs.

In the past you have sung second soprano in ‘London Contemporary Voices’, hits from the Blitz with the 1940s duo ‘The Bluebirds of London’ and NWA covers in an experimental punk band. What is the main difference between these projects and your solo adventures?

Singing covers or other people’s songs is a very different experience to writing your own music.  The past music projects I had were this.  They were similar to my work as an actress.  I LOVE performing, but there’s something way scarier getting up and singing words you’ve written yourself.  I hadn’t learnt how to express myself through songwriting at this stage.

I should also say I sing and compose in LCV London Contemporary Voices choir.  I just did an awesome concert at the Shoreditch church, where my 5 voice choral piece opened the show and the choir sang with the band ‘The Sea and I’

You perform live with a pedal. Do you intend to introduce band members in the future?

Yes, I want to put together a band.  It’s a long process finding people you work well with who are prepared to fully commit to a project like this.  I do collaborate.  I’ve just started a new collaboration with an electronic music producer, which I’m very excited about.  But yes, Lovelace needs a band.  A drummer and bassist and a super geeky techy-synth player to begin with and then, in my dreams, 8 clarinetists, 8 saxophonists, some french horns…

You’re working on a full-length album? How is that going?

Hopefully one would hear creative and professional development.  I broke my wrist 2 months ago and I couldn’t play guitar for a while, which forced me to work more with beats and synths.  We’re sadly moving away from the full album experience.  I want it to be a journey.  I already have a few songs written, but things change all the time and I discover new methods and inspirations.  I will be different – better!