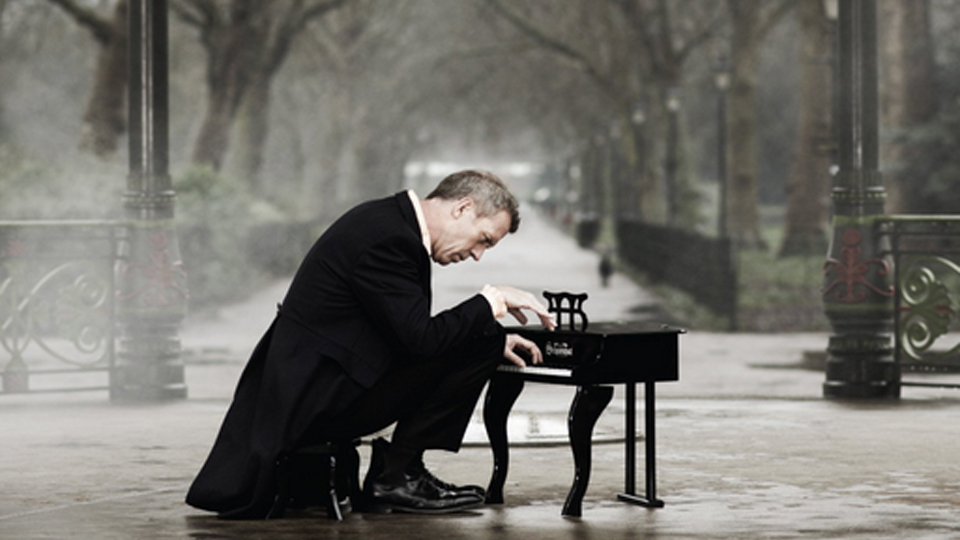 The absurdly talented (and it couldn’t have happened to a nice man) Hugh Laurie returns with his second album of blues covers. Didn’t It Rain, recorded in January this year, follows the actor-come-blues-man’s 2011 debut Let Them Talk, though whereas his previous album concentrated on New Orleans Blues, Didn’t It Rain encompasses styles of blues from all over the American heartland, touching upon a few other American musical genres too.

Laurie is working again with the Copper Bottom Band, and where the previous album had a few big-name guest vocalists, Didn’t It Rain eschews the likes of Tom Jones (a merciful development) in order to more appropriately showcase the talents of Taj Mahal, Gaby Moreno and Jean McClain as lead or guest vocalists on roughly half of the tracks. Laurie-worshippers should note that there are a few more tracks where he doesn’t sing at all – the most glaring one being on the title track – a female-led gospel song (a bit of god-bothering to endure I’m afraid) which enables the guest artistes McClain and Moreno to perform together.

Where Laurie doesn’t sing (and to be critical for a moment his vocal range and ability is reasonable but limited – lacking a touch of vibrato – the tracks where he takes the lead, such as the poignantly sung Evenin’ and the joyous Wild Honey really play to his strengths), he does of course provide instrumentation, often piano and guitar. He shows a flair for a few other instruments this time, quite rightly crediting himself for ‘Judge’s gavel’ for the opening of Send Me To the ‘Lectric Chair. It’s a song about love and death dominated by Jean McClain’s earthy lead vocals, a position she also fulfils for I Hate A Man Like You.

Understanding the power of a bombastic opening, the rendition of first track The St. Louis Blues is pretty attention-grabbing, going for an all-out tango (counterintuitive, but it works). Junkers Blues (attributed to the wonderfully-named Willie ‘Drive ‘Em Down’ Hall) is one of the shortest tracks, and wouldn’t be out of place on Let Them Talk. In a similar vein is Vicksburg Blues, though Laurie relinquishes vocal responsibilities to Taj Mahal – who lends his gravel, gravitas and soul to bringing the track to life. The Latin tango influence returns with Kiss of Fire, sensationally sung (in Spanish) by Gaby Moreno, who pleasingly duets with Laurie. It’s a sexy, smouldering track and unlike anything that Laurie’s done before. Moreno is at her absolute seductive best on The Weed Smoker’s Dream – another sexy track with deliciously sleazy sax accompaniment.

If you go in for a slow-paced chill out song with a bit of harmonica, Careless Love will hit all the right notes with you. One For My Baby is also slow-paced, but in the vein of Evenin’, it concerns lost love, and the lyrics tell the tale of a conversation from a melancholic drunk to a barman at the end of a long evening. The album rounds out with the philosophical Changes, which builds towards a fulsome musical interlude and features Laurie on yet another new instrument – the whistle!

Whilst Laurie is notorious for taking modesty to the level of a martial art, his judgement in recording his music can’t be questioned. Whilst the album titles bear his name, the music is undoubtedly a collaboration, with Laurie playing alongside musicians he “pretty much worships” (according to the sleeve notes). Didn’t It Rain is a collection of blues covers selected and played for no purpose other than unabashed passion for the music.

Blues purists and the literal-minded may be sniffy about a middle-class Englishman recording the genre (“by rights I should be singing songs by Gilbert and Sullivan” Laurie jokes – thank heavens he has good taste instead); but the wide appeal of the album will lie in the huge and growing fan base Laurie has attained. His enthusiasm for the blues will introduce his listeners to songs and artists they’ve probably never heard of and broaden many horizons – and that is surely no bad thing.

Didn’t It Rain is a great collection of blues covers and an enjoyable and distinctive album in its own right. More please, Hugh.