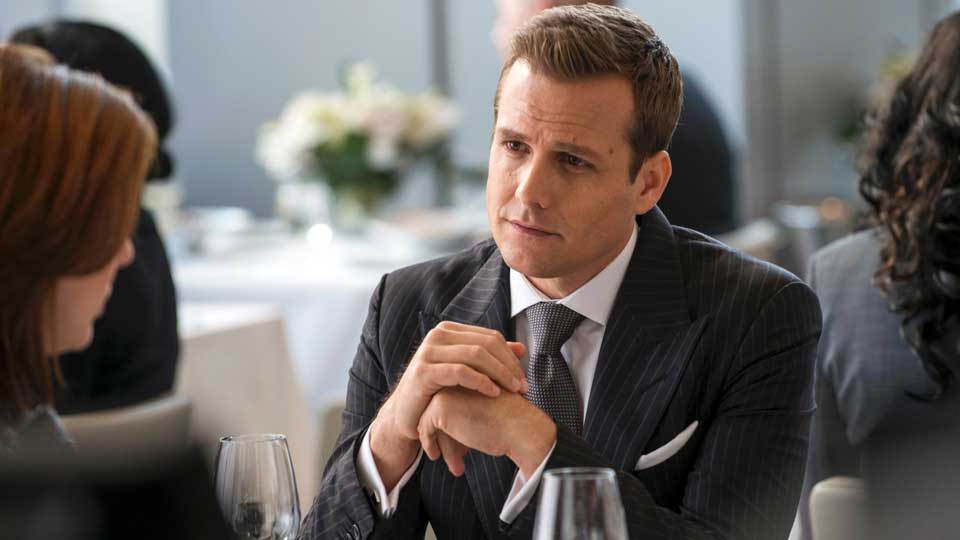 Suits is a show that has worked its way into our affections and found itself a loyal fanbase on both sides of the Atlantic. Here in the UK the show is the most-watched on Dave with the second season having just ended. Following the story of cocky lawyer Harvey Specter (Gabriel Macht) and his brilliant associate Mike Ross (Patrick J. Adams), who is trying to hide the secret that he isn’t a trained lawyer, the show mixes legal cases with the right balance of comedy and drama. Suits: Season 2 is now being released on DVD in the UK.

Suits: Season 2 picks up right where the first season left off, with Harvey’s boss Jessica Pearson (Gina Torres) discovering that Mike never went to Harvard and has no legal training. The season opener She Knows reveals the fate of Jessica’s knowledge whilst the entire firm has to deal with the return or absent co-founder Daniel Hardman (David Costabile). Over the course of the season Harvey, Mike and Jessica have to work together to make sure that Daniel doesn’t cross the line and do them out of their jobs.

The main story strand for the season is the power struggle between Harvey and Jessica, and Daniel. The former co-founder claims to be a ‘changed man’ following his five-year absence which saw him depart the firm in disgrace. Harvey and Jessica aren’t so sure but are they being paranoid or is he really up to no good once again?

Alongside the various legal cases that Harvey and Mike have to deal with over the course of the season there’s several sub-plots too. Mike’s relationship with paralegal Rachel Zane (Meghan Markle) continues its rollercoaster as she suspects he isn’t being honest with her and he knows he can’t be with her based on a lie. Partner Louis Litt (Rick Hoffman) moves his loyalty between Jessica and Daniel feeling that he isn’t being given his dues but will he pick the right side? Harvey’s legal secretary Donna Paulsen (Sarah Rafferty) gets her own story too this season but we won’t spoil it by giving out all the details here.

The performances across the cast are superb. Gabriel Macht and Patrick J. Adams make one of the best on-screen duos in recent memory as Harvey and Mike. The two bounce off each other trading witty one-liners and sometimes fiercely disagree. They create a believable chemistry though and that’s the hook of the show. Gina Torres is perfect as the seemingly nice but unmistakeably hard-nosed Jessica Pearson. Her scenes with Macht are some of the best in the show as she tries to keep his character Harvey under control. Good support comes from Rick Hoffman, Meghan Markle and Sarah Rafferty too. All three actors get a bit more to wrap their teeth around this season.

Extras on the DVD release include interviews with the cast, a selection of deleted scenes, featurettes, cast commentaries and a gag reel.

Suits is one of those shows that is truly must-watch TV. It’s addictive and throughout the second season there are plenty of cliff-hangers to make you want to keep watching. The pace for the show is fast and the script tight. Our only complaint is the overuse of the word ‘shit’ which feels out of place. It’s said several times an episode but quite honestly it doesn’t need to be there. That aside we’re counting down the return of the show which is back with a third season in the US very soon.