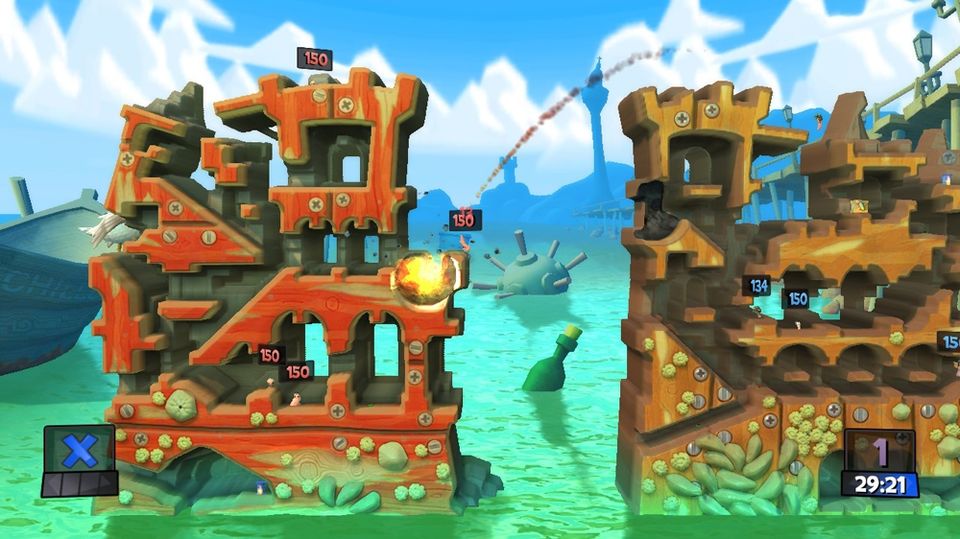 Team 17 have been putting out new Worms games almost every single year since the original game hit the Commodore Amiga back in 1995. Worms has appeared on many formats over the years and even made the transition from 2D to confusing 3D and back again. Now last year’s download-only title Worms Revolution is getting a boxed retail release as Worms Revolution Collection.

Although the series has now been around for almost 20 years very little has actually changed from the core gameplay of the original. The graphics are nicer and there are more crazy weapons but it’s still almost the same game it started out as. The main reason little has changed is because the original was excellent and very addictive. Players take control of teams of worms and then try to kill their opponents before they kill them first and last team standing wins.

To justify yet another Worms game the developers usually throw in a few extra weapons, customisation options and map designs. Worms Revolution uses a brand new engine for the series and renders a 2D view of a 3D world which gives the game the same classic feeling as the original. However this isn’t the only new addition as Revolution also brings dynamic water effects, exploding physics objects, new customisation options, more weapons and a brand new class system.

The class system is the best new feature in Revolution and after playing you might find it hard to go back to earlier versions. Standard worms are now classed as Soldiers and are joined by three other classes – Heavy, Scout and Scientist. Classes come with their own attributes that give them specific advantages and disadvantages during battle.

The Soldier is the most balanced class, average in size, decent movement and damage. The Heavy is the biggest worm with more health, bigger damage but less mobility. The Scout is the smallest and moves faster, jumps higher but deals the least damage. Finally the Scientist acts as a support class that is able to raise the health of other worms and build certain things such as sentry guns and girders better than the others.

The game features quite a large single player campaign with 32 levels and 20 puzzle levels. Returning players will get through these fairly quickly but they provide a decent challenge for new players. The later levels do get pretty tough and require you to really think about how you tackle them. Here the classes really come into play and the Scouts in particular are very handy as they can get around far easier without the need for equipment like ninja ropes.

Of the other new features the dynamic water is impressive and adds some new strategic options. For example if you cause an explosion near a pool of water it might flow down the map taking enemy Worms with it. Some of the new weapons also make use of this water such as water bombs and water strikes. The physics objects can be moved around using the new Telekinesis and UFO weapons allowing you to position them for maximum carnage.

The main reason to pickup any Worms game though is the outstanding multiplayer which you can play locally or online for up to four players. Revolution features three multiplayer modes – Classic, Deathmatch and Forts. Deathmatch is basically the classic game with the addition of the new features like water and the class system. Forts puts the teams in forts on their own islands and requires the use of the long range weapons.

The multiplayer is as fun and hilarious as ever. If the included modes aren’t enough you can also create your own customised modes where you can tweak everything about the game. With the ability to also customise your team of worms from names to appearance there is plenty here to keep you occupied for months.

In addition to the inclusion of the full Worms Revolution game this new disc-based collection comes with all three Revolution DLC packs – Funfair, Medieval and Mars. As an extra bonus it also contains the full Worms 2 Armageddon game and its five DLC packs – Battle, Puzzle, Forts, Time Attack and Retro. If you’re a Worms fan you might already have these packs but if you don’t then they really add a lot of value to this release.

Worms Revolution Collection is a strong release that packs two of the best Worms games to date. The new additions in Revolution are enough to make this a worthwhile purchase for Worms fans and if you’re new to the series it’s an even more tempting offer.