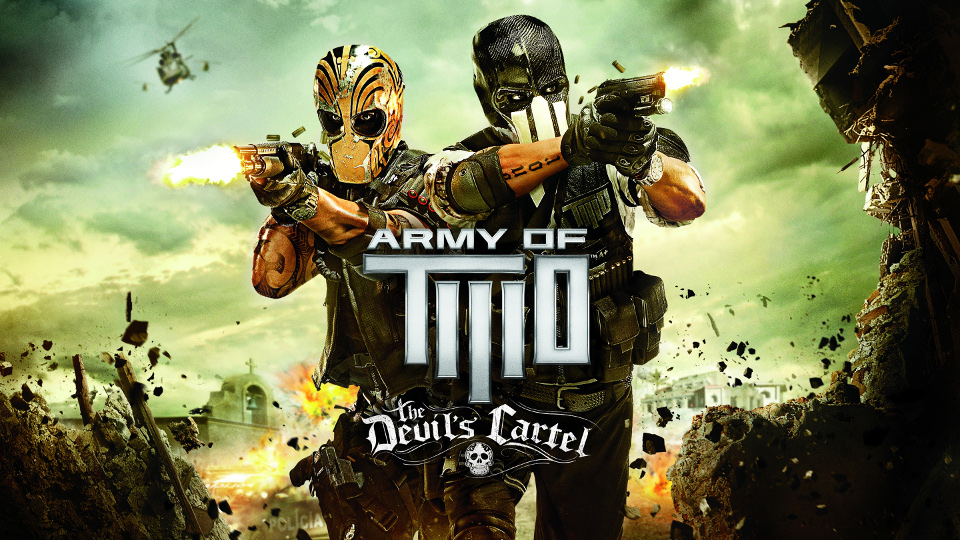 Army of Two: The Devil’s Cartel is the third game in the Army of Two series. Powered by Frostbite 2 (Battlefield 3) and with Visceral Montreal (Dead Space series) at the helm surely this has to be the best game of the series so far? We took a look at the Xbox 360 version to find out.

The game again follows Private Military Company T.W.O. as they battle against La Guadaña (the Scythe) which just happens to be the world’s deadliest cartel. Continuing the tradition of the Army of Two series this latest instalment again focuses on co-operative play and features two masked protagonists. This time around the two main characters – Salem and Rios – have been replaced by two recruits who go by the names Alpha and Bravo. Choosing such generic names appears to be an attempt to help you make the characters your own.

This is further demonstrated by a new focus on customisation that allows you to customise your tattoos, tactical gear, loadouts and masks. The masks are the most customisable part of your character and certain players will love this feature. When choosing your loadout you can pick primary and secondary weapons from Assault, LMG, Shotgun, SMG and Sniper classes. Your choice will be influenced by your play style. We preferred to play with an assault rifle and shotgun.

The game initially feels quite similar to Gears of War with its cover-based third-person shooting. On the whole it controls quite well but the cover system takes some getting used to. With a little practice you’ll be moving from cover to cover in no time.  Our big problem with the controls was the lack of a roll button to dodge incoming fire and dive out of the way of grenades.

Grenades tend to take out a large amount of health and the lack of a dodge ability means you go down fairly often. When you go down in combat it’s possible to be revived by your team mate with a shot of adrenaline and you can return the favour when they go down. This keeps the action flowing but also stops you worrying too much about taking cover.

Killing enemies and blowing stuff up fills your Overkill special bar. Once full you can activate Overkill which is a ridiculously overpowered god-mode. While active you’re granted invincibility and infinite ammo and grenades. You are also then capable of causing an insane amount of damage and destruction to everything around you. Enemies, wall, vehicles and even buildings can be completely obliterated. It’s fun while it lasts but is available far too often making things too easy. In some ways it feels like it was included either to show off the awesome power of Frostbite 2 or just to justify the need for it.

The game monitors your actions as you play and rewards you with in-game cash. In particular it wants to encourage co-op play by rewarding communication and co-ordination. Players are expected to work together with one keeping enemies busy while the other flanks their positions. At the end of each section the game evaluates your performance and it shows you how you rank against other players in the world.

As much as co-op is encouraged it really isn’t enforced and most enemies can be easily taken out by simply running and shooting with no thought involved. Enemies on the whole seem pretty dumb which they make up for by just how many there are. At times the odds seem overwhelming until another Overkill kicks in.

There’s a lot that Army of Two does right but plenty that it does wrong. Walking around together shooting enemies and reviving each other isn’t really co-op. Occasionally you need to work together on climbing a wall and there are some fixed turret sections too. For a series that sells itself based on the co-op experience there needs to be better things to do.

Graphically the game looks nice enough thanks to the Frostbite 2 engine and the amount of destruction is impressive when Overkill is active. The story is fairly forgettable and the banter between the characters is only mildly entertaining at best.

The campaign should last you around eight hours and there is plenty of replay to be had if chasing leaderboards is your thing but most players won’t want to go back. If you enjoy repetitive mindless shooters then Army of Two: The Devil’s Cartel is worth a look. However if you’re looking for a standout co-op experience then you’ll be disappointed.

Advertisement. Scroll to continue reading.
In this article:Army of Two, EA, The Devil's Cartel, Visceral Montreal