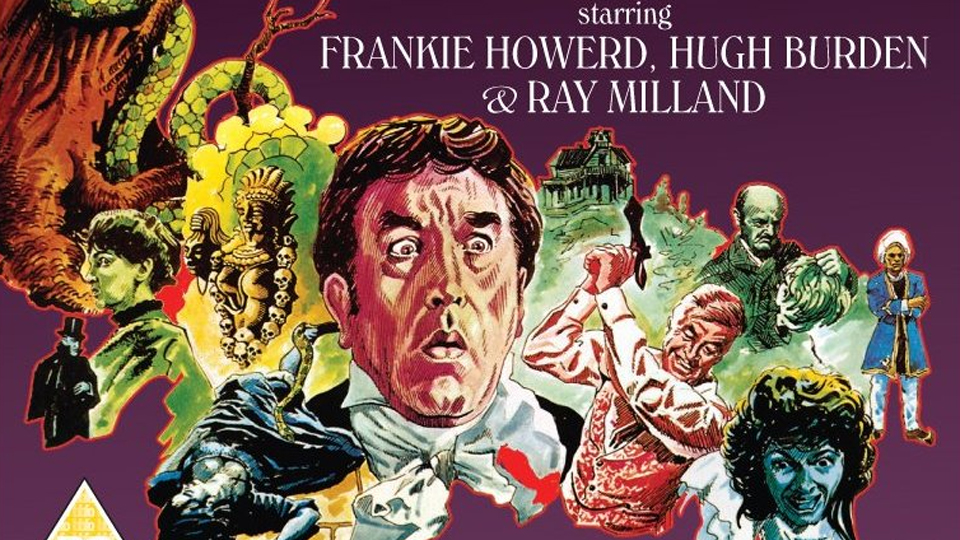 The draw for this fairly obscure British comedy/murder mystery film is star actor Frankie Howerd, the camp comic who probably remains best-known for the sand and sandals sitcom Up Pompeii.

Released in 1973, The House in Nightmare Park arrives at a time when the Carry On and Hammer Horror films were, if not at their peaks, then still doing reasonable box office business. This film tries to combine both genres, and emerges ultimately as a somewhat satisfying murder mystery spoof, utilising the Georgian period setting so beloved of writers of that niche (and lately re-popularised by The Woman in Black).

Every cliché in the book is injected into ninety minutes of screen time: a sinister, dark old house; armoured knights standing guard at the top of staircases; snakes kept in a pit; a will leaving a vast inheritance; an illegitimate son; murderous intentions to remove competition for the fortune – The House in Nightmare Park covers the lot. Whilst it seems that the whole point of the movie is to poke fun at the whimsies and formulae of the genre, you can be left wondering what the point is, since over a feature length film that particular joke ceases to be funny and rapidly becomes tiresome. Between jokes, the viewer is beholden to following a flimsy and predictable plot. It comes as no surprise to see one of the names on the screenwriting credits is Terry Nation – the man who wrote for Tony Hancock and became a millionaire by virtue of inventing the Daleks – the very definition of a competent, occasionally brilliant but often pedestrian jobbing hack.

What rescues the film from banality is its performers. A word first on Hugh Burden, who appears here as an obvious red herring for the murderer as a short-tempered military type. Burden, who died in 1985, is perhaps best-remembered for playing the villain in Jon Pertwee’s first ever Doctor Who adventure: an unbelievably creepy performance that has given successive generations of children nightmares. Contemporarily, his biggest success was playing the title role in The Mind of Mr JG Reeder, also released Network, in which he played a genial, mild-mannered civil servant. Here, he plays a bluff, belligerent ex-military type (his catchphrase is, “You swine!”), but his comic timing is superb, and it’s another performance that does enormous credit to a chameleonic and highly talented character actor.

No less enjoyable is Welsh performer Kenneth Griffith, whose vast career encompassed a wealth of cult favourites including an appearance as the judge in the final episode of The Prisoner, arguably the most bizarre and thought-provoking fifty minutes of television ever committed to film. His comfort zone was playing oleaginous smiling villains, and it’s precisely what he brings to this film; playing a money-grubbing veterinarian masquerading as a dentist: cue a scene in which he attempts to inject a protesting Frankie Howerd in the mouth with a comically large syringe. John Bennett, who, thanks to his thin lips and lined face, invariably appeared in a variety of un-PC guises (he was the Chinese villain in a classic Tom Baker Doctor Who serial) has had the boot-polish applied to play an Indian manservant – but hey – that sort of thing was commonplace and acceptable four decades ago.

If the supporting actors are good then the star is simply delightful. It’s easy to forget, two decades after his death, what a truly great entertainer Frankie Howerd was. Is The House in Nightmare Park his best work? Far from it, but he ekes every bit of comedy available from a reasonable if uninspiring script, and is absolutely captivating as the fey idiot wannabe actor who wanders into a madhouse of murderers. He’s given plenty of delicious asides and terribly British double-entendres, and carries the whole film with aplomb. This is by no means a hilarious comedy, but Frankie Howerd is good for the money and will raise a titter or two.

There’s no point analysing the virtues of the silly and predictable plot. If you enjoy camp British comedy and the kind of fodder the British film industry churned out in the 1970s, then there’s enough that will appeal about The House in Nightmare Park to make it worth your while. It’s good fun, unobtrusive at only ninety minutes, and best enjoyed with a bottle of wine and a brain in no mood for taxation. There are many worse comedies and murder mysteries; and indeed this pastiche of (at the time) popular genres is light, but enjoyable.