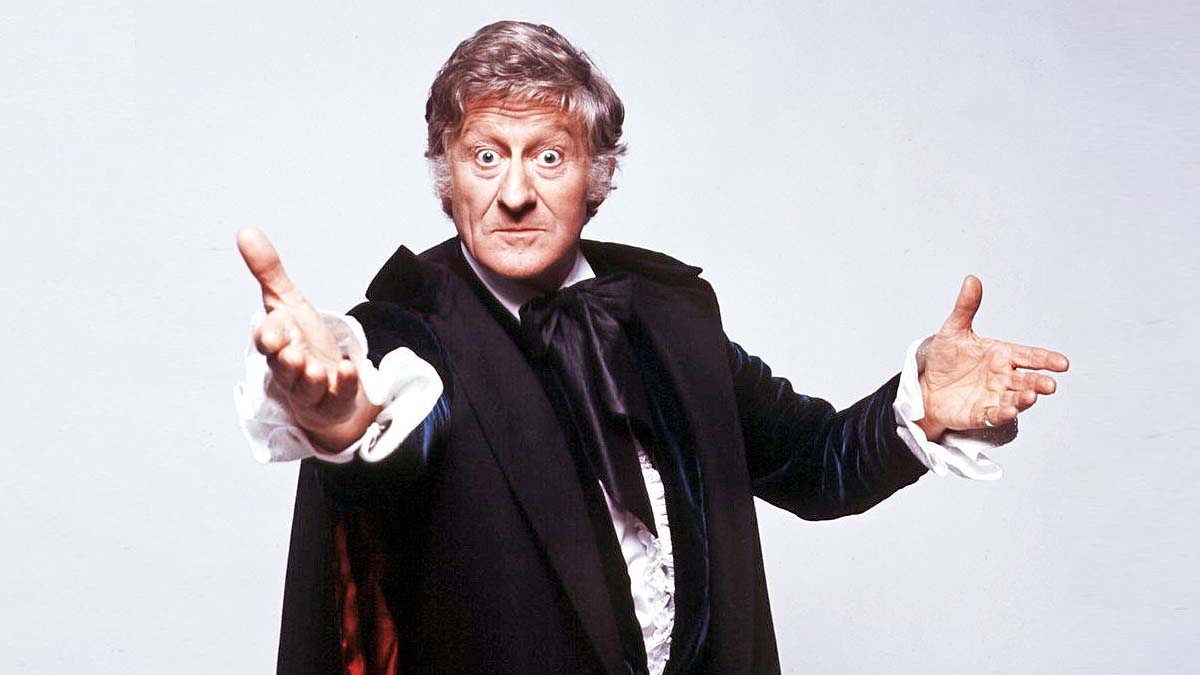 25 years ago this week, we lost one of the nation's most beloved performers. To a generation of radio fans, he's remembered fondly as a muse of comedy voices in The Navy Lark.

Others will know him for his touching and irreplaceable Worzel Gummidge - the living scarecrow with changeable heads and a thirst for cups-o-tea and slices-o-cake.

Yet, for an unending catalogue of generations young and old, he continues to be adored as the action-packed Third Doctor - the dazzling incarnation that brought Doctor Who firmly into the 1970s and living colour, to assure its success for decades to come.

Looking back at Jon Pertwee's four years in the role, over 128 episodes and five glorious seasons, classic Doctor Who fans Greg Jameson and Samuel Payne attempt the impossible: drilling down their top six adventures in time and space with the Third Doctor.

Sam: So, the late, great, Jon Pertwee. Easily one of the best Doctors of all time, wouldn’t you say, Greg? Just an amazing man.

Greg: He was terrific, wasn’t he? Like a light bulb, he glittered…

Sam: He was the nob of the nebular. The bon vivant of BBC Television Centre. Never topped. The James Bond of the Doctors, with all the flare and fancy of Jason King. The Jimi Hendrix of Doctor Who – frills, velvet and big hair.

Greg: Did you know it’s now fifty years since he was Dr. Who, and twenty five years since he sadly died, aged 76. I remember it well. It was the day before I sat my General Studies A-Level.

Greg: I didn’t say I passed. Anyway, enough of the in-jokes, Miss Grant. How did you find out? It was a big moment for me when we lost Jon.

Sam: Huge. I found out on the way home from school, and had to double check – as we all did back then – on Ceefax. No internet on the Amiga 500. It was heartbreaking to see it confirmed in that austere, blocky typeface on our JVC TV. I was such a huge Doctor Who fan at the time.

In the 1990s, Mr Pertwee really was the ambassador for the show and so very popular; you’d see him in costume on shows like Noel’s House Party or Surprise Surprise, often in character. He’d just come off doing his Doctor on Radio 4 and it seemed he could go on forever…

Greg: I know! I loved Paradise of Death and The Ghosts of N-Space. I listened to them lately on 180 gram LP, thanks to an Entertainment Focus review.

Sam: You never pay for it.

Greg: Although it seems like yesterday when I tuned in my wireless set back in 1993, most of the cast is now dead. In fact, Harold Innocent, who so memorably said, “Strawberry” in The Happiness Patrol, checked out even before the serial finished airing.

I met Pertwee once in Manchester Town Hall in 1994, and I give the story in our podcast. Did you ever have the pleasure?

Sam: I never met Mr Pertwee, but I wrote to him and received a signed photograph – with robotic dog K-9 from Dimensions in Time – which I treasure to this day. Ah, 1993. We speak about that on our podcast too.

Anyway, for many years Mr Pertwee was my go-to Doctor. There was something just so exciting and authoritative about his performance – a statesman to look up to I suppose. A wizard with style and gadgets. Plus, he was backed up by some great stories, wasn’t he? Some of the best TV of the time.

Greg: Of all time. Yes, and he still resonates with audiences today. He has such magnetism. My husband Pip, a not-we, nominates Pertwee as the actor he thinks of as the definitive Doctor. And of course, we grew up with the Target novelisations and the VHS tapes and I always liked the ones with Jon’s handsome, craggy face on the cover. He’d sure lived a life! It was an exciting world to explore. We have a top six that we both agree on, don’t we?

Sam: Well, perhaps we’ll fight it out. For me, coming in at number six – like Patrick McGoohan – is, rather aptly, Mr Pertwee’s last big adventure in the lead role. It’s The One With The Giant Spiders! Planet of the Spiders! Do you agree?

Greg: I’m not sure I do! It’s a lovely runaround, and Barry Letts threw the kitchen sink at giving his dependable leading man a good send-off after five glorious years. But for me, it’s another kind of Planet. One with Thals and frozen Daleks on it, and an action adventure script by Terry Nation…