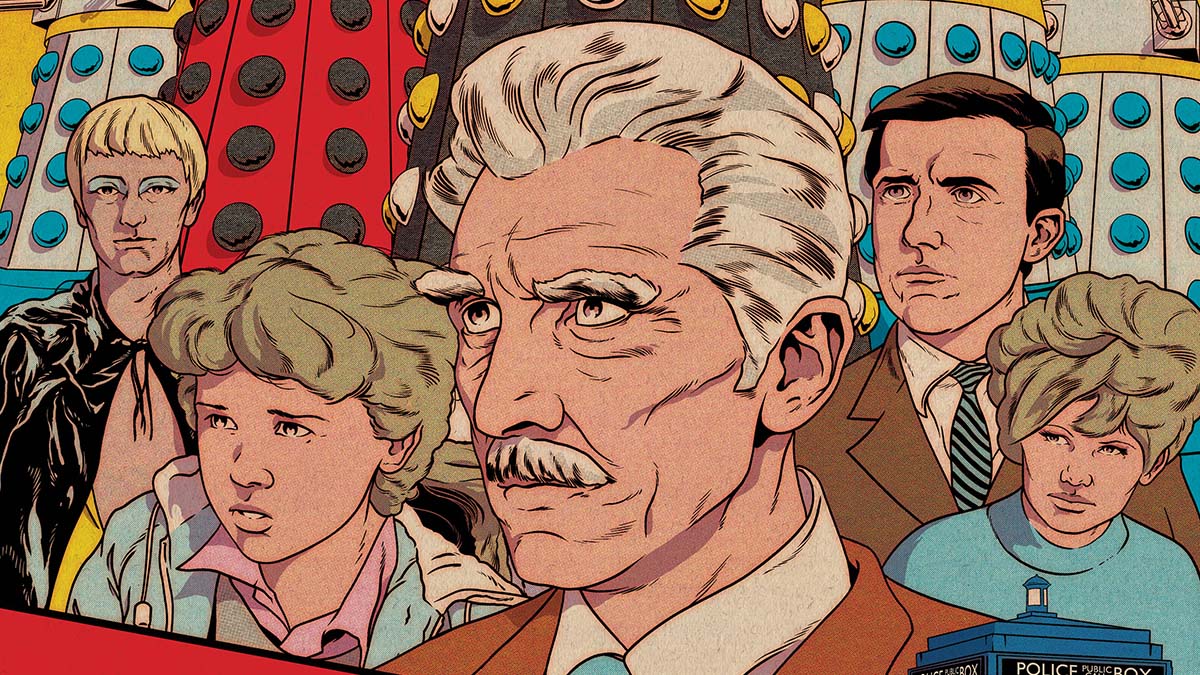 ‘Doctor Who’ hit British TV screens in 1963, and was a huge success right from the word “Dalek”. Two feature films, unique in the annals of Doctor Who, were made for the big screen as an attempt to cash in on the “Dalekmania” of the mid-1960s. As they weren’t produced by the BBC, but were nevertheless loosely based on First Doctor William Hartnell’s opening Dalek stories, some pretty sizeable differences were made in order to circumvent copyright laws. Thus, the look of the TARDIS interior and the redesigned Daleks are not quite what viewers may expect.

Since their release on DVD and even Blu-ray some years ago, the film prints have been restored and remastered, and are now presented for the first time in ultra high-definition 4K. The first outing, 1965’s ‘Dr Who and the Daleks’, looks brighter, more colourful and sharper than ever before.

‘Dr. Who and the Daleks’ sees the TARDIS land on the planet Skaro. Exploring their surroundings, the planet appears to be dead; the soil nothing but sand and the forest now nothing but the petrified remains of trees. The travellers suffer radiation sickness from the high levels of radioactivity – the result of a nuclear war between the Daleks and the Thals. With the Daleks planning to wipe out all surviving Thals, Dr. Who and his companions must find a way to convince the inherently pacifistic Thals to fight back in order to save themselves.

It is immediately clear that the film is targeting a younger audience than the television series. Perhaps the feeling was that, on the big screen and in colour, the Daleks would have been too scary for kids if they were translated directly from the small screen. Thus ‘Dr. Who and the Daleks’ boasts bright pink plastic sets for the Dalek city on Skaro that, inarguably, camp up and undermine the menace they exuded through Ray Cusick’s classic sets as depicted in grainy black and white.

In order to reach a wider and more international audience, an established big screen English star was found to play the lead role. The charming Peter Cushing is extremely lovable as “Dr Who” (now depicted as an eccentric Englishman who invents a time machine in his back garden, rather than an alien traveller in space and time). His portrayal is the complete opposite of small screen counterpart Hartnell’s alien and occasionally sinister Doctor – instead providing a warmer hero for young children to more easily trust. The Daleks, who fired death rays on the television, expel fire-extinguisher carbon dioxide gas to successfully render them less terrifying. They are also brightly-coloured and some even have multi-coloured sensors, which gives them a friendly rather than sinister appearance. And rather than travelling with a difficult, moody teenage granddaughter as William Hartnell’s Doctor did, Peter Cushing’s Susan is a young child who is much easier to handle (brilliantly played, it must be said, by young Roberta Tovey). The comic element is played up by the Doctor’s young male sidekick. Beloved entertainer Roy Castle offers exquisite comic timing and pratfalls and manages a bit of heroism along the way too.

‘Dr Who and the Daleks’ is beautifully directed by Gordon Flemyng, and he succeeds in rendering an epic feel to the adventure. He has a great eye for detail, making each frame interesting to look at, using different levels and taking full advantage of extensive studio space. The rocks sliding apart to reveal brilliant lights beneath the Dalek city is an especially effective cinematic moment. Undoubtedly, this is a slicker, faster-paced and altogether bigger budget version of ‘Doctor Who’. Barry Gray’s distinctive and dramatic cool jazz musical score is another major plus point, and immediately attention-grabbing when played over the opening credits. The charm of the film is its nostalgic 1960s period (now apologised for in the inevitable yawn-inducing trigger warning at the start of the disc). It succeeds because it stands the test of time as an exciting adventure.

The overall effect of the restoration, which brings clarity and definition to the film, is a double-edged sword. Certainly ‘Dr Who and the Daleks’ has never looked better, but the sharpness of the image reveals the artifice and betrays some of the illusion. The make-up on Peter Cushing’s face is patently obvious in close-ups. Though only in his early 50s at the time, Cushing regularly played decrepit characters. Thus a grey pallor is added to his face to age his skin. Bushy eyebrows and a grey wig complete the transformation. The make-up and hair would have been sufficient at the time, but they don’t escape the scrutiny of ultra high-definition. Most fans will be long-reconciled to this trade-off, ever since the ‘vidfired’ VHS releases, and will gladly accept higher resolution and live with seeing the joins.

The stunning 1960s vintage-style cover artwork by Johnny Dombrowski packages ‘Dr Who and the Daleks’ very attractively for fans. A collector’s edition also includes a booklet. There are several exciting extra features on the disc. ‘The Dalek Legacy: Destination Skaro’ is sixteen minutes in length and sees modern-day voice of the Daleks Nicholas Briggs and other ‘Doctor Who’ luminaries putting the legacy of the 1960s films into context within the wider world of ‘Doctor Who’. ‘Restoring Dr Who in 4K’ is an eleven-minute instalment about how the original film elements have been digitally enhanced for this restoration.

The disc also boasts the documentary ‘Dalekmania, filmed in the mid-1990s, which covers both films and features some of the then-surviving cast and crew from both films and explores the possible reasons for the overwhelming popularity of the Daleks. Of particular interest are the stories of Jill Curzon and Roberta Tovey, guest actors Barrie Ingham and Yvonne Antrobus; as well as Eddie Powell, a stuntman whose involvement in the second film left him with a broken ankle. Pinewood Studios expert and Roger Moore’s former right-hand man Gareth Owen is also available to impart his knowledge of the film’s origins. An audio commentary featuring film critic Kim Newman in conversation with ‘Doctor Who’ writers Robert Shearman and Mark Gatiss takes you all the way through the film with affectionate insights. A separate audio track reunites companions Jennie Linden (Barbara) and Roberta Tovey (Susan).