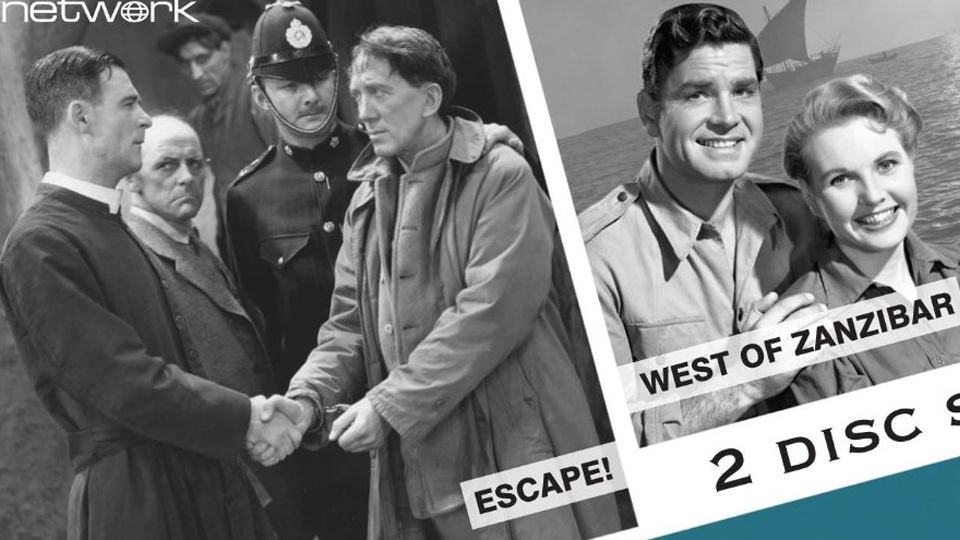 Ealing Studios were one of the biggest and most successful British film studios of all time. They hit their peak with unforgettable comedy classics such as The Lavender Hill Mob, The Man in the White Suit and The Ladykillers in the late 1940s and early 1950s, movies which made a star of Alec Guinness.

This welcome release showcases four feature films (though they are all fairly short, running to just over an hour in most cases) from the legendary studio’s early days. The actors involved (arguably barring Edmund Gwenn, who went on to work with Hitchcock, amongst others) are mostly forgotten, having never made the transition to modern film classics that later Ealing stars such as Alec Guinnes and Peter Sellers achieved. Nevertheless, this release offers a rare and forgotten work from luminary director Carol Reed, who was behind the lens for The Third Man, The Fallen Idol, Odd Man Out and (with considerably less artistic merit) Oliver!, to name but four of his unforgettable offerings to cinema history.

This collection opens with Escape, directed by Basil Dean (remembered, if at all, by Sherlock Holmes aficionados for his involvement in two big screen outings for the Victorian detective). Based on John Galsworthy’s play (the over-rated author of the interminable The Forsyte Saga), Escape is a worthy affair following the misfortunes of a man who is imprisoned for the manslaughter of a police officer. An educated offender, he finds life inside difficult to adjust to, and, as the title suggests, finds an opportunity to become a fugitive from justice, whence his problems go from bad to worse. It’s all rather turgid. The first twenty minutes of the piece are largely static, and it takes an age for the plot to get going. Despite its 1930 release, Escape bears the hallmark of much of the Ealing output: the mixed blessing of a sentimental view of human nature. The denouement of the piece is, frankly, laughable, leaving Gerald du Maurier’s appealingly wide-eyed leading performance as the best thing about the film.

The next title on offer jumps forward quarter of a century to 1954 with West of Zanzibar. Uncomfortably, this was still almost a decade before the country gained independence from British rule. The presence of pith helmet-wearing white leading man Anthony Steel dispensing western wisdom and morals to the black extras, whilst hardly racist, is nevertheless patronising, since he places it upon himself to advise the Galana tribe how to manage their agriculture and decide their future. The short way of saying it is that the film hasn’t aged at all well. There’s a subplot about the evils of the ivory trade, but not enough is made of this, and since imperilled elephants never make it to the screen, it’s largely pointless. It’s the only one of the four movies shot in colour, and the extensive location filming is of some interest. However, its plot is wafer thin and West of Zanzibar is unfortunately the longest film of the release.

There’s a definite improvement with the second disc, especially with the Carol Reed-directed Penny Paradise from 1938. It’s an enjoyable light comedy set in Liverpool amongst the dockers and seamen. When working class Joe Higgins thinks he’s won a fortune on the pools, he becomes a changed man, and has to learn that he was rich to begin with. The tone is, admittedly, often mawkish, and it’s truly bizarre that not a since one of the characters has a Liverpool accent, which is very different to the Lancastrian tones employed in its stead. Perhaps it was feared nobody would understand scouse? You can’t help falling for its charms thanks to the detailed and character-driven direction by Carol Reed. There are some beautiful touches with comic effect, such as a widow’s photograph of her deceased husband, depicted as a wide-eyed tyrant like Orwell’s Big Brother, taken out of the drawer whenever she has a gentleman caller, and Reed’s assured hand very quickly establishes characters and their relationships to one another, ensuring always that you care about them. It’s more Last of the Summer Wine than The Boys From The Blackstuff, but this gentle comedy, with some real laugh-out-loud moments, is a sure sign of things to come from Ealing Studios. The only downside is the annoying propensity of characters to break into song that derails the pace all too often.

The final film on offer is 1936’s Cheer Up! in which two penniless playwrights attempt to sell their sure-fire smash hit new musical to West End producers. They face inevitable hurdles and mishaps along the way. The best thing about the film is the enjoyable double act between Stanley Lupino and Roddy Hughes as the two hopeful writers, only slightly lessened once you notice Lupino’s startling resemblance to David Cameron. He brings his background in music hall to the fore, offering a large performance replete with slapstic, making his short-lived film career an interesting cross-pollinated curiosity. For a comedy, it’s all a bit hit and miss, with some scenes that should be funny falling completely flat (wining and dining a leading actress in an expensive restaurant where they can’t afford to pay the bill is an obvious example). An already tenuous plot is stretched out to seventy minutes of screentime thanks to some irritatingly chirpy song and dance routines. It’s at its best with moments of farce, but there’s very little substance and not enough to laugh about to ensure you don’t mind.

The quality of the films varies considerably, but since the tone and subject matter of every one is wildly divergent, this release does at least make for varied viewing. The highlight is undoubtedly Carol Reed’s imperious directorial stamp which lifts his film above the humdrum of the others, which largely find it harder to escape the trappings of stolid worthiness, stock characters and misfiring humour.