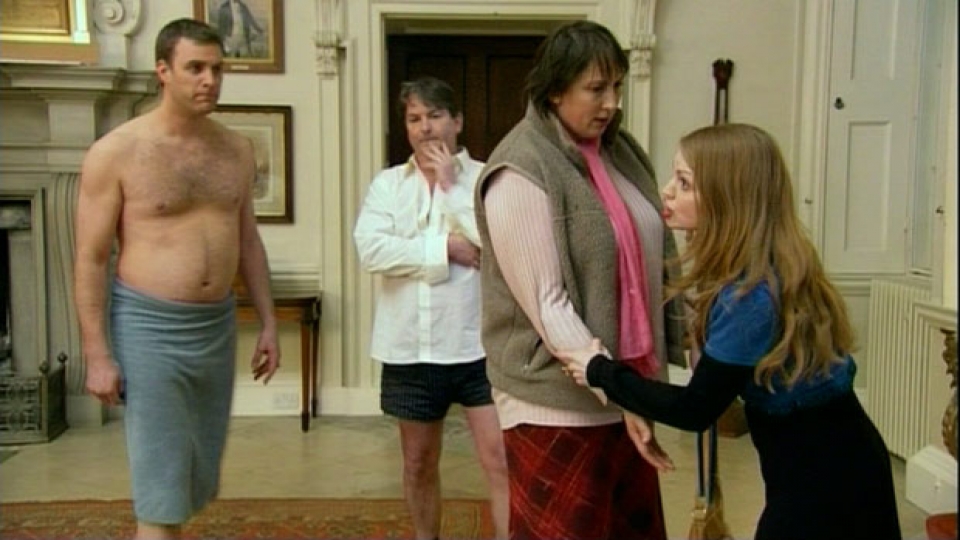 A remote country mansion plays host to a school reunion dinner happening amongst twelve people. They are all offered a million pounds each if they can stay on the estate, cut off from the outside world, for 96 hours. With deaths, sexual intrigue, kidnapping and spiralling levels of farce & confusion, the action races towards a climax of “will they or won’t they?”

12 In A Box has several famous faces from recent comedic television shows, including Miranda Hart, Katy Wix and Kenneth Collard, which instantly peaked our attention as we really like their comedy styling in their shows. Also the film does have a very interesting idea that is vaguely reminiscent of Brewster’s Millions, so a lot of fun could have been had with the storyline especially as it’s set in such a large mansion and estate.

But it all comes crashing down as soon as the film starts, as it was nothing like what we were expecting. Instead of a funny incident packed British comedy we are treated to some of the flattest supposed comedy even seen. None of the laugh lines work and instead all disappear into the ether and are never to reappear again. We know that some of the cast can deliver set-up comedy lines incredibly well, yet even here, they seem completely lost in mire of terrible writing and poor direction.

Another terrible area of 12 In A Box is how badly it is filmed. It looks like it’s been filmed on a 1 megapixel camera that is so grainy it’s difficult to make out certain far away objects and then, when it’s the turn of close-ups for the cast you can see the grain in the pixels.

Then to go along with the poor filming is the sound, as at times it is so muffled that it’s like standing on a train station trying to listen to announcements. There is a scene where they are all on the stairs and the sound varies between recognisable lines and completely lost audio because of the echoing in the hallway. Every time the camera changes position the sound changes as well, especially when the person talking has their back to the camera, as you cannot hear what they are saying.

12 In A Box wants to be in the same vein as the classic Carry On films, yet it is nowhere near as great as those. It’s poorly scripted and so woefully shot and directed that nothing clicks. Even with some good television comedic actors, the film cannot be lifted above anything other that awfully boring. The bottom of the barrel of British comedy has been scraped here.

Advertisement. Scroll to continue reading.
In this article:12 In A Box, Miranda Hart