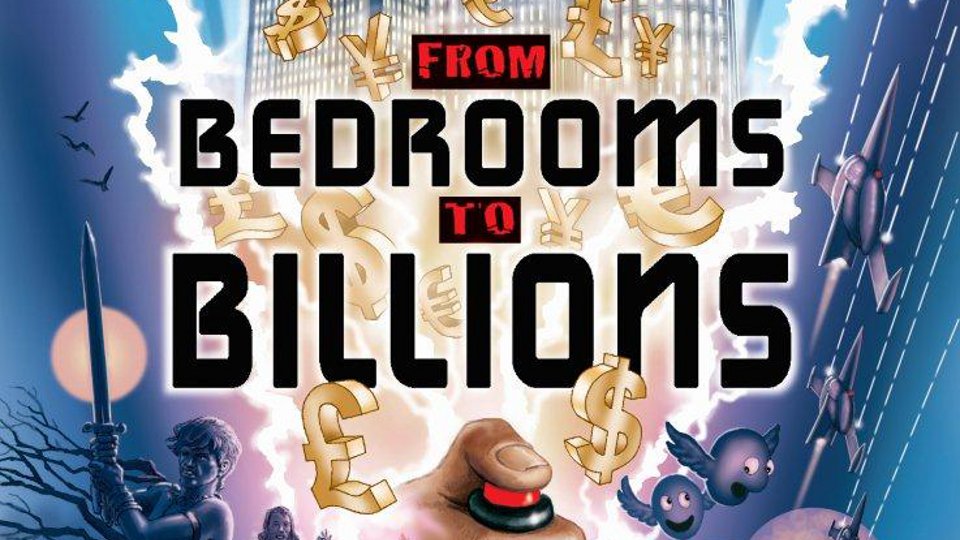 From Bedrooms to Billions, the film that tells the incredible success story of the UK Video Games Industry has staggered its creators by both smashing through its Kickstarter crowd funding goal in just five days and also, due to partnering with UKIE, can now supply every school in the UK a copy of the film free of charge.

From Bedrooms to Billions is a two hour feature length documentary film telling the remarkable, true story of the British Video Games Industry from 1979 to the present day and how the creativity and vision of a relatively small number of individuals allowed the UK to play a key, pioneering role in the shaping of the billion dollar video games industry which today, dominates the modern world’s entertainment landscape.

Featuring interviews with key contributors to the UK story in video game development, publishing and journalism from over the last 40 years, a soundtrack from legendary video game composers Rob Hubbard and Ben Daglish combined with compelling visual archive, From Bedrooms to Billions is the first to attempt to bring this fascinating story together starting in the late 70’s, spanning ‘Thatcher’s Britain’ of the 80’s and culminating in the dramatic shift of fortunes for the UK Video Games Industry by the late 90’s and beyond. The film celebrates the importance of this era and why it has become such a landmark period in the history of British invention, creativity and industry.

The Filmmakers Anthony & Nicola Caulfield, who have been shooting interviews for nearly 18 months, turned to crowdfunding platform Kickstarter to help raise finance to assist with enhancing the movie with archive footage and music. In addition they have partnered with the ‘Association For Interactive Entertainment’ (UKIE) to ensure that a copy of the film when finished is made available to every secondary school in the UK free of charge. It is hoped that the film could act as an inspirational tool for children of today and show them that programming and game creation is an achievable and rewarding option, detailing how a collection of, mainly children, did it themselves 30 years ago using just their imaginations and, by today’s standards, incredibly primitive equipment.

[quote by=”Nicola Caulfield, Producer”]We always hoped that these wonderful stories could inspire and act as a catalyst for children today. In watching the film they will learn that in the late 70’s, across the 1980’s and beyond the UK once experienced an incredible rise in creative talent and an industry was born from nothing more than enthusiasm, the availability of the home computer and a ‘I wonder if I can’ type attitude. Anthony and I are delighted that UKIE are going to be working with us to get the film out to every secondary school across the UK.[/quote]

The filmmakers were asking for £18,000 on crowd funding platform Kickstarter, which would allow them to bring in a small selection of archive footage and music, however with more than half the campaign remaining and their target already reached they have decided to create a single stretch goal of £100,000 with a highly unique and ‘free’ reward to every single backer of the campaign should they reach it.

[quote by=”Anthony Caulfield, Producer”]The original goal we set of £18,000 we felt was achievable, but now that we’ve hit it so quickly we’ve said to everyone that if we can get the total to £100,000, allowing us to secure even more archive footage and licensed music from the eras we’re covering, we will then reward every single backer with a ‘free’ special edition of the film, containing a second bonus disc with all the extended interviews and game making of’s, totalling over 4.5 hours worth of material![/quote]

This Special Edition containing an extra 2.5 hours’ worth of footage on top of the 2 hour movie represents easily the most comprehensive visual record of the UK Video Games Industry story. It will have an exclusive cover different from the current film poster drawn by video game magazine artist Oliver Frey and will only be available to backers of the current Kickstarter campaign (and original Indiegogo campaign) as a free upgrade if the project hits its dream stretch goal of £100k by April 26th.

[quote by=”Nicola Caulfield, Producer”]We want people to understand that this is a movie and the first place for it to be seen is at the movie theatre. We’re planning for a theatrical run across the UK later in the year that will include special screenings within cinemas kitted out with computers, consoles and games from key eras shown in the film, as well as some games industry legends as guests who after the screening can talk about their own experiences from their time in the industry. We are really excited with what we have planned![/quote]

The From Bedrooms to Billions project went live on Kickstarter on Monday 25th February and reached its funding goal of £18,000 by the 2nd March, less than 6 days later. The campaign ends on 26th April.

As well as being able to order a copy of the film on digital download, DVD and Blu-ray on the Kickstarter site, some of the most famous UK Video Games makers and musicians have signed and donated various items as perks for higher funding tiers.

You can visit From Bedrooms to Billions page on Kickstarter here: http://kck.st/V0U89j and also visit the film’s official website at www.frombedroomstobillions.com or Gracious Film’s own website at www.graciousfilms.com.

In this article:From Bedrooms to Billions, Kickstarter