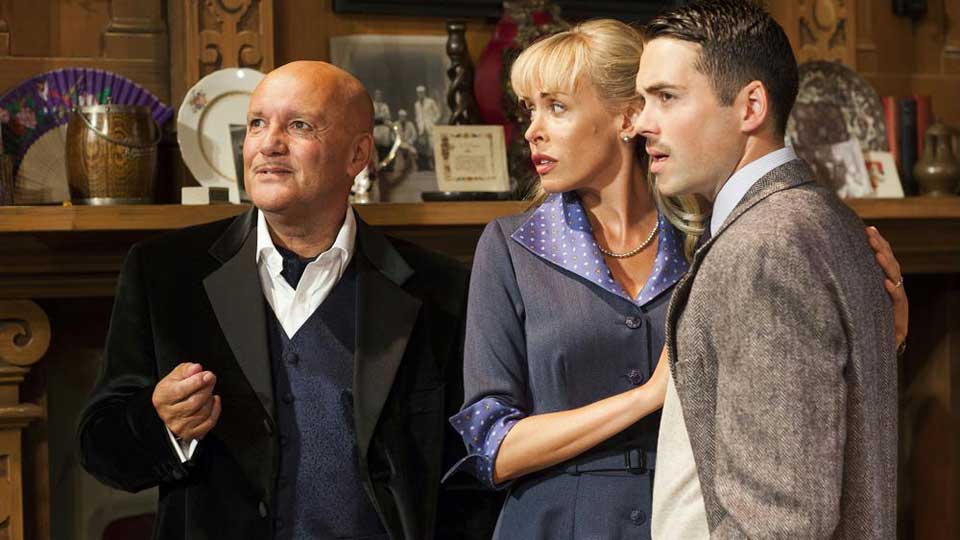 The Mousetrap arrives at The Leeds Grand in celebration of its Diamond Anniversary. Holding the record as the longest-running British play of modern times, Agatha Christie’s murder mystery is considered by many as the author’s definitive theatrical outing.

Events takes place in the hall of Monkswell Manor, a newly established hotel run by newly wedded Mollie and Giles Ralston. Shortly after a wireless newsflash announcing a murderer on the loose, individual guests gradually arrive at Monkswell, each with their own alibi and hidden secret. As heavy snow closes in around the Manor, cutting off the residents from the outside world, Detective Sergeant Trotter arrives just in time to witness a murder. It is the precursor to a massacre unless they can quickly identify the culprit.

After sixty years, Christie’s writing is evidently dated yet nonetheless charming for its stiff, imperialistic stance. Sometimes unintentionally amusing due to its archaic language and gender stereotyping, there is however much wit, farce and irony to be enjoyed. The author’s tested formula of character exposition does wear, however, impairing any naturalistic progression the play could take in favour of characters verbally informing one another of their back-stories. Old-fashioned, clunky techniques such as this may jar with more sophisticated audiences expecting to see characters behave less theatrically. An audience should forgive this element as a consequence of the writing style of the period. Brimming full of clichés before they were clichés and side stepping some political correctness, it is best to view the script within the time it was written and accept that the content is wholly directed towards a mainstream, 1950s middle-class audience and little more.

After a plodding start the pace picks up with the arrival of a group of residents who add the intrigue and suspense expected in a Christie thriller. Whilst characterisations are generally thin – with two excessively drawn homosexual stereotypes – the parts are nevertheless very well realised by a cast who capitalize on the show’s strengths; humour is well pitched with Received Pronunciation and the claustrophobic setting is blocked and directed with vibrancy and physicality, providing energy to otherwise stolid scenes of verbal intercourse.

Elizabeth Power shines as a crotchety Mrs. Boyle, stealing many of her scenes with a bullish authority which is both intriguing and amusing. Wren is portrayed by Steven France in a fury of camp flourishes and mime, whilst Karl Howman is virtually unrecognisable as the other-worldly Mr Paravincini. Clare Wilkie provides an understated study of coolness as Miss Casewell, simmering with indeterminate sexuality. Graham Seed’s hearty Major provides an obligatory seniority in a play of relatively young characters. The Ralston couple are played by Jemma Walker and Bruno Langley, best known for their work on television in recent years. Both convey the sense of new adventure in a newly married couple and Langley in particular succeeds in providing a slightly sinister edge. A particular performance highlight is relative newcomer Bob Saul as Detective Trotter, who counters anguished fury and physical comedy in equal measure. Saul is undoubtedly one to watch out for.

An old classic is given a classy staging through some tidy art direction. Technically the show looks beautiful, with warm tungsten lighting and well-considered visual touches, such as a chilling wind that blows through an open window, rustling newspapers in a rack. Classically designed, the setting has a standard of verisimilitude which benchmarked a classic era of stagecraft. Perhaps a photo-realistic set is now out-of-vogue, with the fashion for more abstract settings being the norm, however the style works well here and is a welcome change. An all pervasive sound of winter winds adds to the intensifying claustrophobia of the piece.

A welcome treat on a cold winter’s evening; The Mousetrap retains its rightful place as a 1950s British tradition as much as a play, and is an agreeable slice of retro crime-melodrama. Whilst the secret of the show is so obvious one would perhaps expect a second twist, the play is ultimately an entertaining yarn and a journey back to a bygone era of pot-boiling mystery. Light, witty, silly and ultimately entertaining, The Mousetrap is an inoffensive if unadventurous romp which is technically at the top of its game, even if the source material is somewhat tired.

Samuel Paynehttp://samuelpayne.weebly.com
Reviewer of Theatre in the North, including releases of classic film and television.
Previous article
Go Back For Murder at Leicester’s Curve
Next article
Burn The Floor review

Walter Presents: ‘They Were Ten’ launching on Channel 4 in November