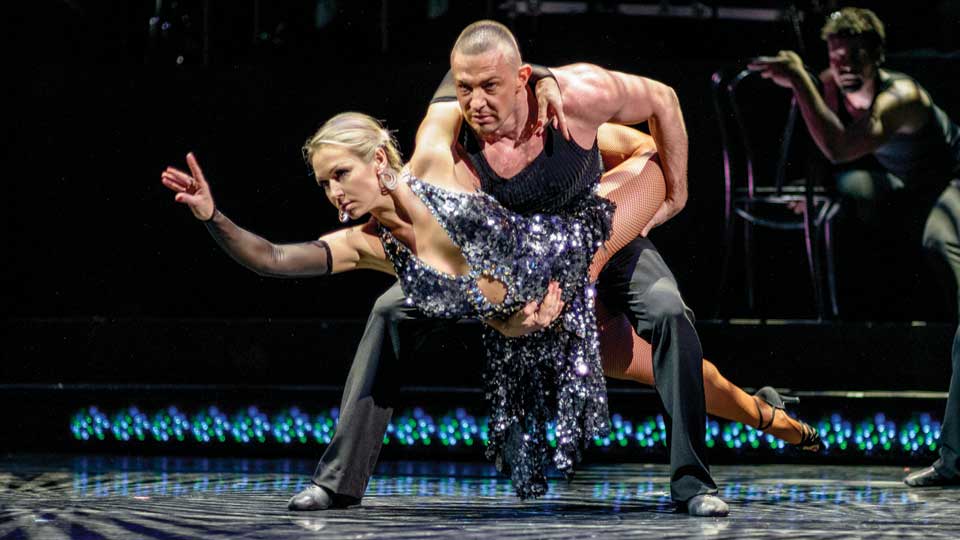 Burn The Floor first opened thirteen years ago in Bournemouth. Since then the show has been performed in over 300 cities around the world including New York, Beijing, Tokyo and Johannesburg. In 2010 the show enjoyed a successful summer season in the West End before setting off on an epic 53 city US tour. Now the show is back in the West End with Strictly Come Dancing stars Robin Windsor and Kristina Rihanoff headlining. We went along to the opening night last night to see if the show lived up to the hype.

Shaftesbury Theatre was packed last night as celebrities and audience members took their seats to witness the opening show of Burn The Floor’s limited West End run. Ushers told audience members who sat in aisle seats to keep their belongings tucked under their seat as the aisles would be used throughout the show. They weren’t kidding! Dancer Janette Manrara arrived down the centre aisle teasing and flirting with men in the audience shortly before the show began. It was clear from this point that we weren’t about to see just any old dance show.

As soon as the curtain rose the show kicked off and we were treated to a 2 hour dance extravaganza featuring a variety of dance styles and the best dancers from around the world. There isn’t a particular narrative to the show rather a series of dance sequences that effortlessly flow from one into the next. The show is divided up into four parts with 24 songs over its duration. Dance styles include all the ballroom dances you can think of such as the jive, the paso doble, the quickstep and the rumba to name a few.

What impressed us the most about Burn The Floor was the incredibly talented cast of dancers. They executed Jason Gilkinson’s choreography, who also directed, beautifully with energy, passion and commitment. The routines were fast and furious yet despite the high energy you could barely tell the dancers were out of breath at the end of each routine. They kept smiling and danced their socks off delighting the entire audience.

The dancers were all backed with music either from the live band or the singers Peter Saul Blewden and former American Idol contestant Vonzell Solomon. Peter and Vonzell proved to be incredibly versatile vocalists singing everything from Shakira through to Daniel Bedingfield and Dame Shirley Bassey.

Of course many people will go to see the show to see Strictly’s Robin Windsor and Kirstina Rihanoff in action. They led the production and it was nice to see them get to show what they are really capable of. Without the burden of a celebrity partner to train and choreograph, the two dancers wowed with their technique, speed and ability. Another dancer who really stood out was Karen Hauer, also from BBC’s Strictly. Dancing with her partner Kevin Clifton she was elegant and captivating almost stealing the show at certain points.

We should point out though that every single dancer in the production is incredible. From the feisty Giselle Peacock through to the comic performance of Robbie Kmetoni, every single dancer brought something different to the stage. There’s plenty of eye candy two for both sexes and plenty of shirtless guys.

Burn The Floor is without a doubt the best dance show we’ve ever seen. Nothing else comes close due to the exhilarating choreography, fantastic music and talented dancers. Robin and Kristina are sensational as are all the dancers in the production. If you like your dance energetic, sexy and mesmerising then Burn The Floor is the show for you.