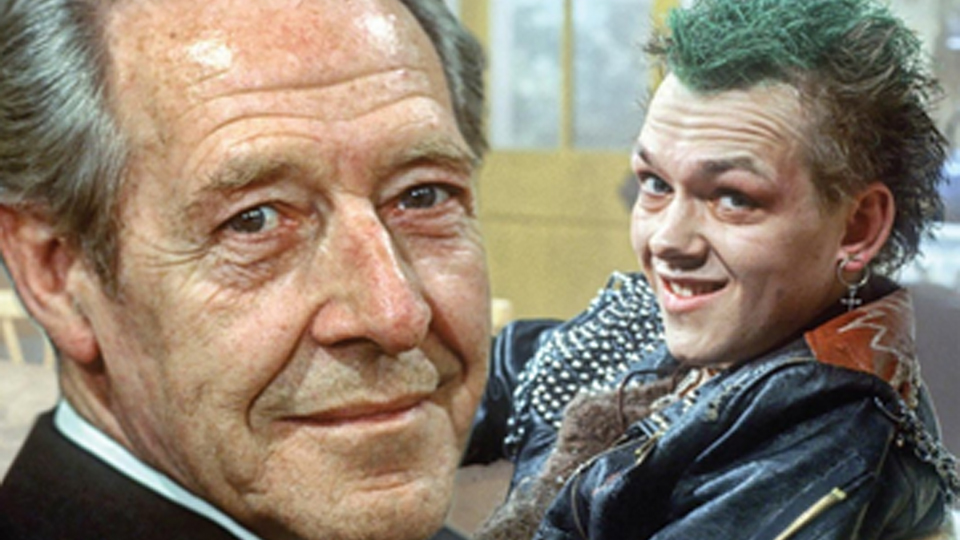 Sorry I’m a Stranger Here Myself is a relatively short-lived British sitcom (thirteen episodes over two seasons, which are both included in this release) from the very early 1980s. The set-up is that refined older gentleman Henry (the late Robin Bailey) inherits a property, and leaves his wife to her beloved television set and bathtub for a new life on his own in a new town.

It’s not all plain-sailing for the domestically liberated Henry, since his inherited semi-detached is a bit of a come-down, awkwardly constructed with a low slanting roof that he’s always banging his head against. He instantly finds himself on the wrong side of his neighbours Doreen and Tom (the late Diana Rayworth and David Hargreaves), a pair of broad comedy leftists (they eat yoghurt and Tom is permanently irate) after suggesting his wife died after consuming yoghurt.

Henry’s house isn’t his own, either. Whilst it’s been left unoccupied, it’s attracted a squatter in the form of young green-haired punk Alex (Christopher Fulford). Much of the humour is derived from creating contrasts between the smooth, educated Henry and the course and vulgar Alex. In an unlikely twist, Henry allows Alex to live with him, though there’s no hint of anything sexual, and both characters are ultimately sweet-natured.

The production values are reflective of the era – it’s universally badly directed, as if they’re always running out of time, and plenty of mistakes survive to the screen. The most cringe-worthy example is an end-of-part-one titles, in which the camera holds for far too long on Robin Bailey and Nadim Sawalha whilst the audience are encouraged to clap and cheer out of all proportion to the funniness of the scene they’ve just witnessed. Poor Robin Bailey, clearly expecting he mustn’t have heard the director shout “cut”, looks at the camera, realises his error, and then tries not to look too strained as the torture continues for another few seconds.

Production values aside, it’s the tone of the humour that dates it so badly. There’s nothing naturalistic in the dialogue – it’s a consistent barrage of feed and punch-line. Whilst it occasionally raises a laugh, particularly through Robin Bailey’s pithy and mild-mannered asides (Henry is a sort of cut-price version of John Le Mesurier’s Sergeant Wilson in Dad’s Army) the overall structure is relatively unsophisticated.

The biggest issue for contemporary viewers comes with the character of corner-shop owner Mumtaz, a Sikh, played by the brilliant Nadim Sawalha (one of very few Asian actors to feature with any regularity on British television of the era).  His casting and third billing can be viewed as a progressive attempt to bring minorities to the screen; but then again many of the jokes fall at his expense and now leave a bad taste in the mouth. Long gone are the days when anyone under a pensionable age could find it amusing that Mumtaz wears a turban (there’s a seemingly inexhaustible supply of gags about bandages) and eats curry, but you’ll find such broadness in abundance here. Nadim Sawalha performs the part with great dignity, but is poorly served by the scripts, and Mumtaz is a massive step back from the sophisticated African prince Philip (Don Warrington) in Rising Damp, the bar for all sitcoms of the time.

The blatant racism (and Alex, who is portrayed as heterosexual, oddly comes in for a fair amount of homophobic abuse) leaves Sorry I’m a Stranger Here Myself in the category of an interesting curiosity from a bygone era. The main issue for a comedy is whether or not it’s funny. That’s entirely dependent upon taste of course, but certainly Sorry I’m A Stranger Here Myself falls neatly into ITV’s massive canon of bad sitcoms. Principal writer Peter Tilbury would go on to have great success with (the vastly better) Shelley, and whilst some of the episodes here revolve around satisfyingly conceived set-ups and pay-offs, the end result is passable but unlikely to leave you holding your ribs and gasping for breath.