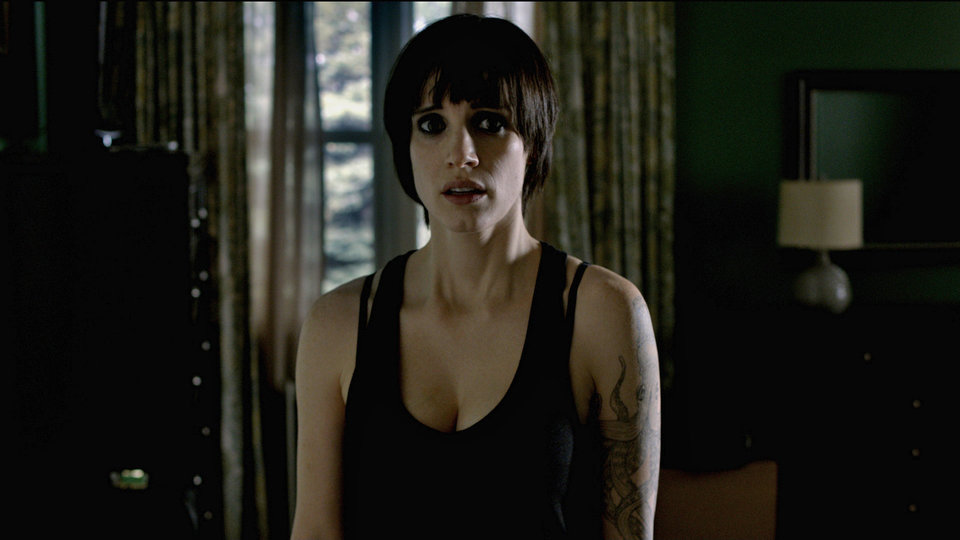 When their father commits a terrible act, two young girls are taken into the woods but manage to escape death by a ghostly presence who saves them. 5 years pass and their good-natured Uncle Lucas (Nikolaj Corster-Waldau – Headhunters) and his girlfriend Annabel (Jessica Chastain – Zero Dark Thirty) finally track them down. Malnourished and without any human contact, the feral girls come to live with them in a bid to re-establish a normal life. But the ghostly apparition who the girls affectionately call Mama won’t let them go so easily.

Mama is an effective chiller that Guillermo Del Toro has taken a hand in as Producer. It goes down the traditional scare route for most of the movie and succeeds in delivering some moments of genuine fright. But a CGI-heavy final 15mins really affects the overall enjoyment of the film.

It all starts strongly enough with a harrowing disaster that leads to the girls being stranded in the cabin. Once they are found the creepiness factor really comes into its own. Having the children act as feral, wild creatures provides some brilliant early scares, especially when one of them crawls around on all-fours.

Pressure is aptly applied as the story progresses and tension builds up steadily in a series of well-orchestrated frights, the best of which simply involves a child playing in their room as Jessica Chastain does house chores. These ‘real-world’ set scares are Mama’s high point, along with simple but effective scenes like one of the girls looking out of a window into an isolated forest and saying “there’s a woman outside and her feet aren’t touching the ground”. You never see it but the line delivery alone is terrifying.

The cast are all excellent with Jessica Chastain yet again stealing the show. Her versatility is staggering when you consider the types of roles she tackles. From Zero Dark Thirty to Lawless via The Help, Chastain repositions herself for every movie with a pose and maturity seldom seen from her peers. This time around she is almost unrecognisable as a rock-chick forced to play Mother. She gives the film an air of believability and quality that helps make the scares work very well.

Elsewhere, their is a very strong turn from Nikolaj Coster-Waldau as the girls’ Uncle. After a brilliant role in Jo Nesbo’s Headhunters, Coster-Waldau now announces himself to Hollywood with a cultured portrayal in Mama. He also avoids many of the usual trappings associated with male leads in horror movies. He shares a very believable and sincere relationship with Chastain that makes you want to root for their plight.

The young girls in the film are played excellently by Megan Charpentier and Isabelle Nelisse, with Morgan McGarry particularly good as the young Victoria. It’s also great to see former Due South regular Daniel Kash get a run-out as the psychologist tasked with uncovering the mystery surrounding Mama.

Everything works well until the final act when the evil is revealed. After spending so much of the film playing their cards very close to their chest, it seems silly to reveal the whole hand so openly. There was still scope for this to be effective (The Woman In Black managed this perfectly). But Mama turns into a CGI-fest that pulls the viewer out of the real-world uneasiness that it has painstakingly created and instead turns this into a fantasy that feels anything but real.

The ending aside, Mama is still a very entertaining and (at times) scary watch. It’s also nice to see a film that focuses on a strong female dynamic too. It’s certainly one of the better horrors you’ll see on the big screen and with an amazing cast all playing their part (Chastain in particular), Mama is still worth your time and attention.