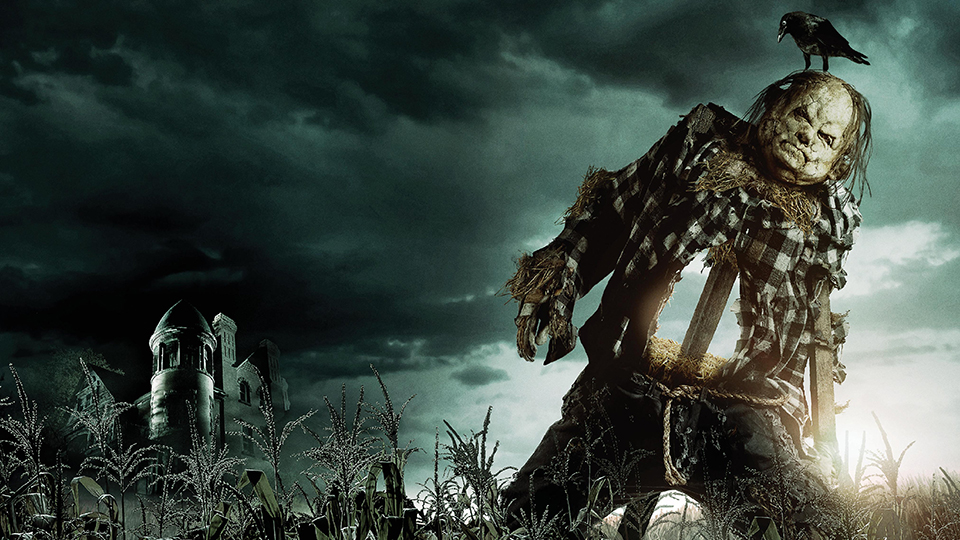 It’s 1968, the year before Richard Nixon became president and his campaign and the Vietnam War is all over the media. In the small town of Mill Valley, Pennsylvania preparations are underway for Halloween. Three teenage friends Stella Nicholls (Zoe Margaret Colletti), Chuck Steinberg (Austin Zajur) and Auggie Hilderbrandt (Gabriel Rush) decide to play a prank on the local bully Tommy (Austin Abrams). Things don’t go as planned and the night takes a bigger twist when they find a book of scary stories in an old mansion which leaves them fighting for their lives.

Scary Stories to Tell in the Dark is the latest film from director André Øvredal (Trollhunter). It is based on the children’s classic horror anthology series of the same name by Alvin Schwartz. The three books were released in the early 80s and 90s with illustrations by Stephen Gammell that really helped bring the stories to life. The rights to the books were acquired in 2013 by CBS films and a screenplay, based on a story by Guillermo del Toro, Patrick Melton and Marcus Dunstan, was written by Dan and Kevin Hageman.

The central cast put in strong performances with Colletti shining the brightest as protagonist Stella who is a wannabe writer and horror fan. I was disappointed though to see Dean Norris (Breaking Bad) underused as Stella’s father Roy. When the prank on Tommy goes bad, Stella flees with Chuck and Auggie and the friends try to hide in the the local drive-in movie theater. There they meet a drifter named Ramón Morales (Michael Garza) who helps them and has immediate chemistry with Stella.

Deciding it might be best to lay low for the rest of the night, Stella suggests they head to a supposedly haunted house that was owned by the Bellows family. After breaking in they begin to explore in the hope of finding the room where Sarah Bellows, the daughter of the family, was rumoured to have been kept prisoner. A search around the creepy house pays off and the room is found. Inside, Stella picks up an old book which turns out to be the journal of Sarah Bellows where she wrote scary stories.

After another run-in with Tommy the group escape and Stella decides to take the book home. That’s when weird things start to happen and Stella notices that the book is haunted as it begins to write new stories on its own. Each new story bleeds into the real world bringing all kinds of nasties to life to terroise the teens. Fans of the books will be delighted to see some of Gammell’s illustrations brought to life on the big screen by creature actors including Mark Steger (Stranger Things), Javier Botet (It) and Troy James (Hellboy).

Not wanting to spoil things too much, the stories include a scarecrow called Harold, a zombie looking for its big toe and one that will make you never want to squeeze a spot again! Most of the stories are a lot of fun and there are a few well done jump-scares. The film felt a little bit like Final Destination as the teens battle against the stories that are written for them.

Scary Stories to Tell in the Dark is a gateway horror aimed at teens. Considering the audience of the source material I must say I was a little surprised that the film has a 15 rating and wasn’t toned down to a 12A. There’s little here to scare hardened horror fans but there’s some genuine creepy moments and plenty to entertain. I look forward to the inevitable sequel.