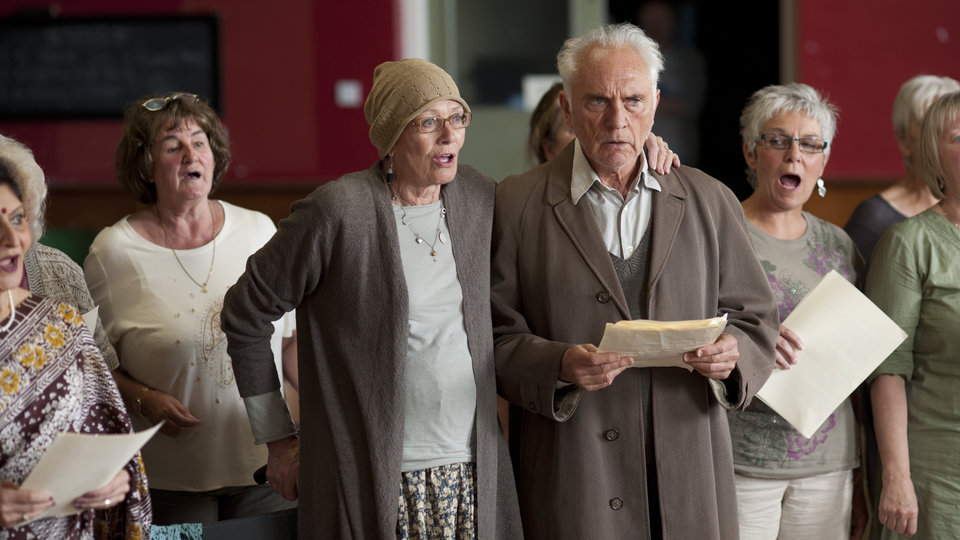 After watching the trailer it would be easy to dismiss Song For Marion as just another throwaway slice of British middle-of-the-road comedy but there is so much more going on here. It’s actually one of the warmest and most sincere films you’re ever likely to see.

What will strike you first and hardest is the films’ strong emotional core. This is a movie that will seriously make you weep. But rather than overplay every sad situation, Song For Marion uses tact and subtlety to achieve its desired effect.

As an audience you are instantly invested into Marion and Arthur’s story. You feel every bump in the road and their heartfelt exchanges will leave a lump in your throat. Throw in a fractured relationship between Arthur and his grown up son (played brilliantly by Christopher Eccleston) and you have enough emotional baggage to weigh down most projects. But Song For Marion plays this card exceptionally well by never wringing every sad moment dry. Much of the time it’s what’s not said that holds just as much weight as what is, with Terence Stamp masterfully conducting this sad symphony to perfection.

It’s safe to say Terence Stamp elevates every movie he’s ever been in and he hands in one of his career-best performances here in Song For Marion. He personifies the repressed but sweet Arthur with wit, charm, sincerity and regret. He impresses throughout and won’t leave a dry eye in the house. Throw in his trademarked, unmistakable voice and you have a performance of supreme maturity from an actor at the top of his game.

Vanessa Redgrave hands in a wonderfully bittersweet performance as Marion. Her chemistry with Terence Stamp is effortless with the two seasoned performers delivering a masterclass in dramatic acting. Having endured quite a lot of personal tragedy in her own life, Redgrave channels this grief into her performance, which is balanced and above all a true depiction of the real strains of terminal illness.

The central friendship that develops between Arthur and Elizabeth is a strong component to why Song For Marion works so well too. Gemma Arterton has been waiting for a role like this and she is brilliant as the enthusiastic choir-mistress who helps both Marion and Arthur through the medium of music. She shares a good chemistry with Stamp and helps make the film a big success.

Elsewhere there is a strong supporting turn from Christopher Eccleston as a single parent struggling to accept his mother’s illness whilst trying to form a lasting relationship with his emotionally-stunted father. The rest of the supporting cast all help blend this together with some nice situation comedy stemming from the choir. British comedy stalwart Ram John Holder, who viewers with fondly remember from Ch4 sitcom Desmond’s, is a particular joy.

Song For Marion is a delightfully touching drama that will strike a personal chord with each and every one of you. This is a film about life and the choices we make, the intentions we have and the regrets we are forced to live with. The impressive cast all make this a joy to watch and with the films’ affecting emotional core, Song For Marion comes in as one of the best comedy-dramas you’ll see in 2013. Brilliant and truly heartfelt cinema that shouldn’t be missed.