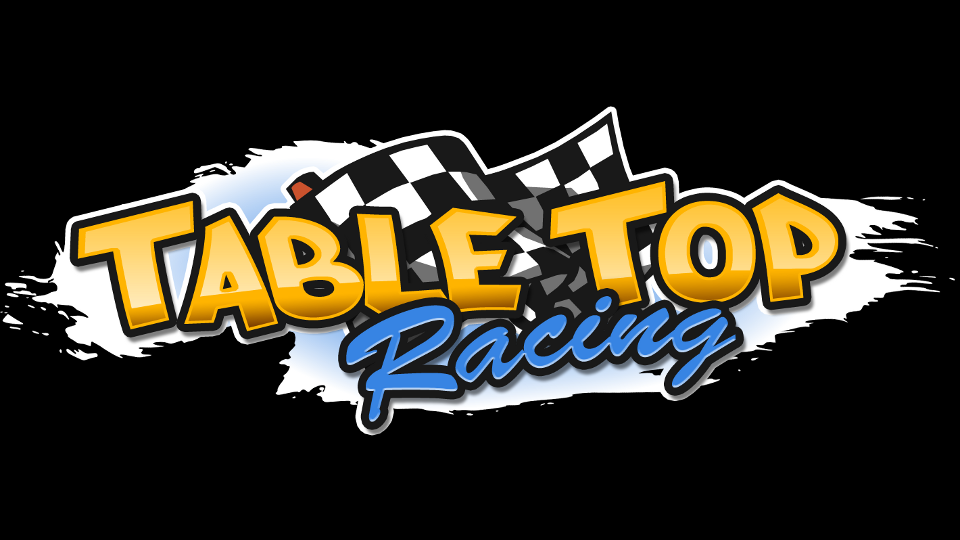 Table Top Racing is the debut title from Liverpool-based indie studio Playrise Digital for iOS. The game is a fun miniaturised combat-racer that wouldn’t look out of place on a console. Having previously worked on many big console games, including the Wipeout franchise, mobile gamers should be in for a treat.

For just £1.99 you get a generous amount of content when you purchase Table Top Racing. The game features both singleplayer and multiplayer modes, 8 reversible race tracks, 10 upgradeable vehicles and a variety of game modes.

When you first play the game you only have access to two of the roster of ten vehicles – an ice cream truck and a camper van. Each vehicle also starts out with basic stats in the categories of speed, grip, acceleration, armor and turbo. The game controls which statistic you can upgrade next for each vehicle which means you can’t just buy all of your favourites straight away. To improve your vehicles you must finish on the podium across the variety of game modes on offer which earns you coins and XP to level up.

Coins can be spent to upgrade your vehicle at the in-game garage and you can also customise wheels and paint jobs. You need to put some serious time into the game to earn enough coins to unlock everything. Example of in-game coin purchases are paint jobs for 100 coins, new stats start at 2,400 coins and the top vehicle can be unlocked for 70,000 coins. A typical race win will net you around 1,750 coins.

If you’re impatient you can purchase coins via microtransactions – the cheapest is a 25,000 coin pack which costs £0.69 and the most expensive is 500,000 coins for £6.99. Purchasing coins is completely optional and could spoil the longevity of the game but it’s also a nice way to support the development team.

During races your vehicle automatically accelerates leaving you to control the steering. There are two modes of control available to you – touch or tilt. In touch mode you simply tap the left or right of the screen to turn and tilt mode requires you to tilt. With some practice tilt mode seems a little more accurate but most players will probably go for touch.

In Quick Race you can choose from any of the eight included tracks with the option to race them in reverse. The tracks are all set on table tops and have you racing around environments inspired by toy sets, noodle bars, BBQs and garage junk. The detail of the tracks is great and the scale really makes you feel like you’re racing a toy car. Graphically the game looks great but is best experienced on a Retina display.

Quick Races are a simple three-lap race against five AI controlled players. The AI does a decent job and can be tough to beat until you’ve bought a few upgrades. When things get easier it’s time to move up a difficulty level. The game initially feels a bit too slow but once you’ve upgraded and started to move up the difficulties this improves a lot.

Littered around the tracks are various power-ups such as bombs, homing rockets, speed boosts and EMP blasts. Using these requires a simple tap of the screen but careful timing is needed to use them at the best place. The power-ups are nothing special and it would have been nice to see a few different ideas. The result of getting hit by an opponent’s power-up is that you get slowed down which at times feels a bit too harsh making it very tough to catch the pack when you fall behind. Crashing is a little frustrating and it can take the game a little too long to realise you’ve gone off the track before putting you back in the action. These frustrations though are minor and don’t spoilt the enjoyment of the game.

There are four Championships to tackle that are comprised of multiple events. There’s a nice variety of events on offer from standard races to hot laps, elimination events and an interesting one where you need to chase down an opponent and crash into them as fast as possible.

The final singleplayer mode features over 30 special events which are single races featuring a mix of race types. In order to take part in some of these you need to have unlocked specific vehicles and winning often requires that you’ve put enough time in to upgrade them too.

Table Top Racing supports multiplayer for 2-4 players via local wi-fi or over game centre for online play. In our experience the matchmaking seems sluggish but that could be with how new the game is and will probably improve as more players purchase it. We found playing against real people much more enjoyable than the AI. The game also has support for global leaderboards, achievements and iCloud game sync.

Table Top Racing is a strong debut title for Playrise Digital that features plenty of content and hours of fun. A few tweaks to the strength of power-ups would make it a more competitive racer. Fans of games such as Mario Kart or Micro Machines should definitely check it out.

Table Top Racing requires 279Mb of storage, costs £1.99 and is available now on the App Store for iPhone 4+, iPad and iPod Touch 4+.