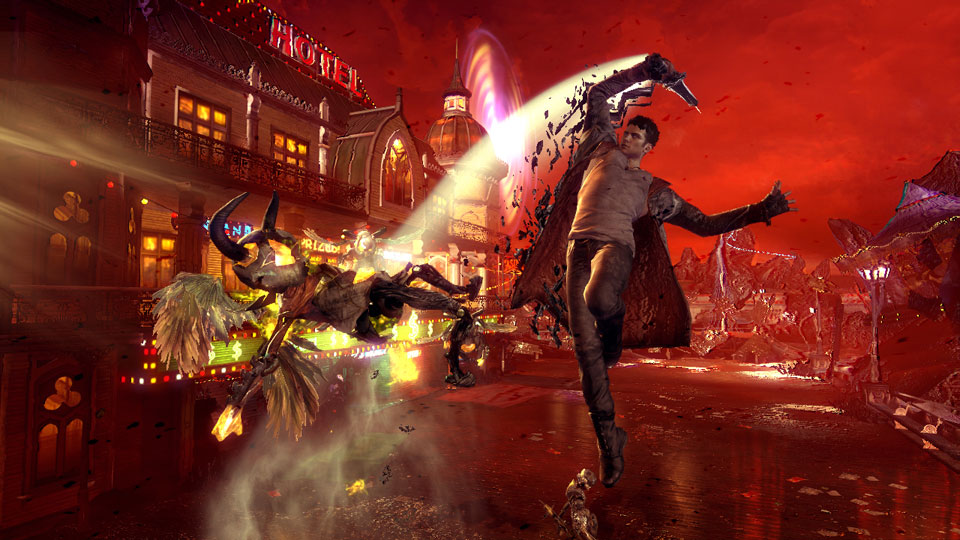 DmC retells Dante’s origin story placing the character in an alternate reality and providing an impressive level of backstory and character development. At the start of the game you find yourself pulled into limbo by a Hunter demon, having to navigate your way through a crumbling pier environment battling a variety of enemies and ultimately a big boss at the end of the first mission.

The second mission is where the story really begins to be established. Dante starts to uncover the truth about his parents and reunites with the brother that he had forgotten existed, Vergil. Following the death of their father Sparda and the murder of their mother Eva, the brothers had their memories wiped and were placed on Earth to live a human existence unaware of their past. From this point on the storytelling is rich and deep as you progress through the increasingly difficult missions.

One of the really fantastic things about Ninja Theory’s reinterpretation of DmC is the incredible environments. The majority of the game is played in limbo with Dante following the ghost-like apparition of Kat, a young girl who is part of The Order, an anti-establishment group led by his twin brother Vergil. She helps you to find your way around as the environments change shape, crumble and distort making your life difficult. Some levels find Dante having to run fast and furiously to avoid getting crushed between moving walls or falling to his death through gaping holes that appear in the floor. It takes quite some skill to anticipate what’s going to happen in order to successfully complete each mission.

To get the most out of the environments you really need to master the control system and all of Dante’s skills. Some parts require you to drag platforms towards you, or seemingly  out of nowhere, whilst others require you to swing your way around like Spider-man. You can also give Dante a boost in the air to increase his projection ensuring he gets across the biggest of gaps. Some environments distort the perspective slightly giving you the feeling that you’re progressing vertically rather than the traditional horizontal route. It’s this kind of variety that puts the game head and shoulders above others in the same genre.

Alongside the main story there is plenty to keep you hooked to DmC for hours. Within each mission there are a variety of hidden objects to locate including keys, secret rooms to discover and trapped souls to free. You really have to explore every nook and cranny if you want to complete all of these too and it gives you plenty of reasons for replay once you’ve completed each mission.

The combat in DmC will seem familiar to fans of the series. Dante calls upon the powers of his mother and father using both Angel and Demon weapons. At the beginning of the game you are armed with your trusty sword Rebellion given to Dante by his father Sparda, and his iconic guns Ebony & Ivory. Progression through the game unlocks several other weapons including the Arbiter, a demonic axe that is best-used to defeat larger enemies with shields, and Osiris, an angelic scythe that enables you to propel enemies into the air to give you a breather when you’re under attack.

As with previous instalments of the game, DmC is all about combos using the style system to reward you with points. In order to score highly you need to attack your enemies with a variety of different combos. Repeating the same moves over and over will see you lose points. It also pays to string together combos and avoid damage as this will see you earning additional points for the skill you demonstrate.

One of the joys of DmC is also one of the things that makes it such a challenging and rewarding game. Due to the variety of enemies attacking you, you have to make a quick decision when it comes to choosing the right weapon to battle with. Some enemies cannot be harmed with certain weapons and often you don’t have a lot of room for error as you get swamped pretty quickly. You can pull enemies towards Dante or you can pull Dante towards them using a grappling hook to make it easier to fight. This comes in especially handy with enemies that have wings or that have shields to ward off your attacks.

There’s a surprisingly rich upgrades system that allows you to upgrade all of the weapons at your disposal as well as Dante’s supernatural abilities. You earn upgrades through the points system and can apply them at the end of each mission or by locating statues scattered around the environments. You can also practice any new combos or weapon upgrades outside of the main game giving you an opportunity to master them before finding yourself surrounded by enemies.

There are also the obligatory trophies that are unlocked when you complete missions and certain combos. Unlockable content, such as concept art, is littered throughout the game as an additional bonus.

Visually the game looks absolutely stunning. The character movement is superb and the voice acting solid throughout. Soundtrack wise it’s all about the rock music as urgent guitar riffs provide the backing for the action throughout the game. It fits perfectly with the overall tone of the game and helps you jump straight into endless combat.

Despite the controversy that arrived with the initial announcement of DmC: Devil May Cry we think that Ninja Theory has pulled off quite a spectacular achievement. As rich and rewarding as you’d expect from the series, DmC adds a new twist to a series that gamers simply can’t get enough of. Yes Dante may be more emo than he used to be and his hair is now dark rather than white but those details seem insignificant when you have a game this involving to while away a hell of a lot of hours. DmC: Devil May Cry is a bold reimagining of the series that looks and feels enough like its predecessors to keep fans happy, whilst offering plenty for those yet to engage themselves with the series.

Pip Ellwood-Hughes
Pip is the Editor of Entertainment Focus and the Managing Director of agency Piñata Media.
Previous article
New Sims 3 expansions in 2013
Next article
Abbey Road Studios teams up with Panasonic