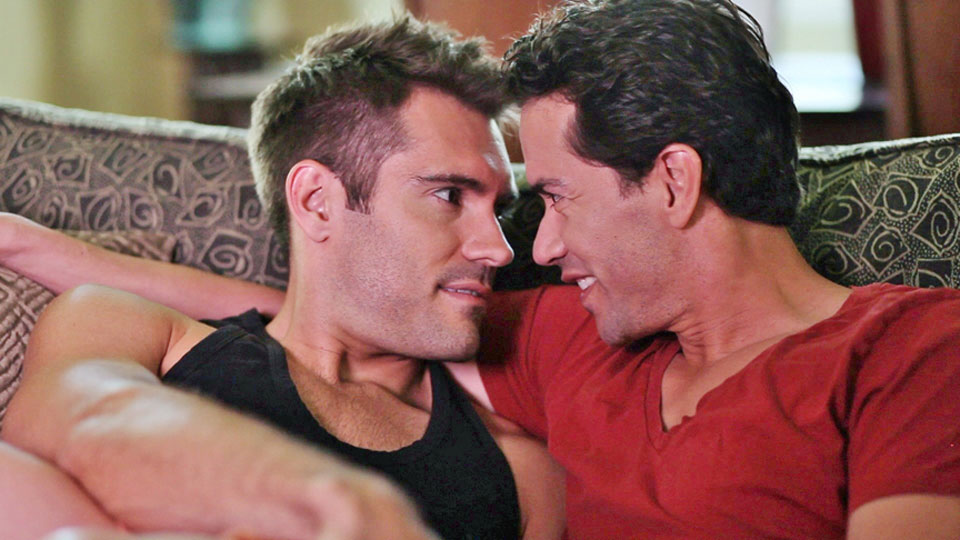 Doug (Eric Dean) is enjoying a no-strings relationship with older man Jacob (Michael Nicklin) who lives next door. Agreeing that it’s fine to see other people, Doug meets handsome young Colton (Benjamin Lutz) during his disastrous 40th birthday celebrations mistaking him for a stripper. The two men are attracted to each other and quickly wind up in bed together. Whilst trying to balance both relationships, Doug makes the startling discovery that his two boyfriends are actually father and son. With that revelation he’s forced to decide between the two men or lose them both forever.

The Men Next Door is the latest movie from writer/director Rob Williams, best-known for his festive classic Make The Yuletide Gay and his 2010 hit Role/Play. The film is a romantic comedy at heart about realising what you want from a relationship and grabbing it with both hands. Admittedly Eric’s situation is pretty bizarre and it takes a suspension of belief to believe that Jacob and Colton would still want to be involved with a man they’ve both slept with. If we were Eric we’d probably have bowed out quietly and moved on never speaking of the situation again.

The cast reads as a who’s who in modern gay cinema and is packed full of familiar faces. Eric Dean (Nine Lives)makes for a good lead as Doug and brings a certain amount of naïve charm to the role. He wants to have his cake and eat it, and he knows this, but he also realises that he can’t continue relationships with both Jacob and Colton without hurting them both. Benjamin Lutz (The Love Patient) plays the handsome yet immature Colton with a cheeky but sincere glint in his eye whilst Michael Nicklin plays Jacob as a caring father willing to sacrifice his own happiness for his son. The three leads create believable chemistry and really hold the film together.

There are small scene-stealing roles from Mark Cirillo (The Seminarian) as Doug’s ditzy best-friend Woody and Christopher Schram (Blue Briefs – Requited) as gym trainer Philip. Ronnie Kroell (Into The Lion’s Den) also has a small role towards the end of the movie. Credit must go to Heidi Rhodes though who is simply hilarious as Doug’s friend Evelyn who struggles to cope with the demands of being a single mother.

Extras on the DVD release include a blooper reel, a commentary with Rob Williams, Eric Dean, Michael Nicklin and Benjamin Lutz, deleted and extended scenes, and a behind-the-scenes featurette.

The Men Next Door may take a stretch of the imagination to believe but if you enjoy it for what it is you’ll find it’s actually a sweet-natured tale about following your heart and being honest with yourself. Rob Williams’ story is well-crafted and his direction is top-notch as always giving The Men Next Door a mark of quality often missing from gay cinema. If you like your rom-coms to deal with the unexpected then you’ll love The Men Next Door as much as we did.

‘The Men Next Door’ is released on DVD in the UK on 14th January through TLA Releasing.