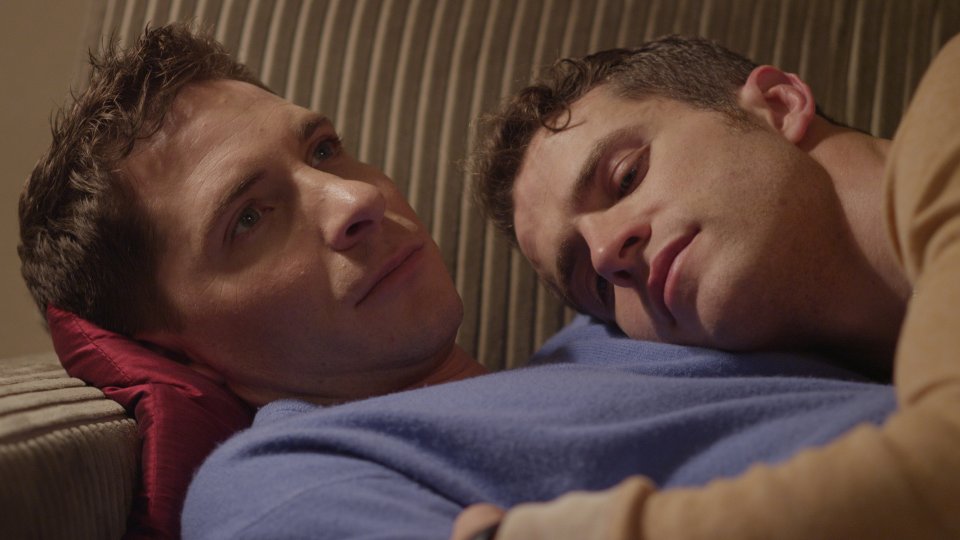 Best friends Lewis (Mark Cirillo) and Cooper (Scott Sell) find themselves in an interesting situation following Cooper’s bachelor party. Soon to be married, Cooper gets drunk with Lewis once the party ends and the two friends begin to flirt with one another. After Lewis admits he’s bisexual, Cooper’s curiosity gets the better of him and the two men have sex. The next morning Cooper leaves to get married but the two make an agreement to meet in the same hotel on the same day every year to catch-up and see where the evening takes them.

The Last Straight Man is the latest film from writer/director Mark Bessenger and it’s essentially a two-hander. After the opening sequence featuring a female stripper entertaining Cooper and his friends, all of the action unfolds in Lewis’ hotel room. What starts out as drunken curiosity on Cooper’s part soon turns into something unexpected as the two men grow closer and closer, and the reality of what they’re doing starts to bring up difficult questions.

From the outset Cooper maintains that he’s straight but he enjoys sexual acts with Lewis providing there’s no kissing, which he believes to be too intimate and something he only reserves for his wife. As the years go by the two men meet as agreed but their relationship starts to evolve. Cooper becomes more daring and needy in terms of what he wants from Lewis, whilst Lewis is battling with a long-held love that he’s never been able to fully express.

The Last Straight Man is certainly an interesting premise and anyone who has had a crush on their friend will be able to relate to the film. Writer/director Mark Bessenger creates a scenario that at first seems unlikely but progresses into something believable that feels realistic. The film throws up lots of questions about the fluidity of sexuality, monogamy and being in the closet. It would be a disservice to you to give too much away about how the film unfolds but what we will say is that it’s surprising, pretty sexy and thought provoking.

The success of The Last Straight Man rests on the shoulders of the actors. In the hands of two less capable actors, the film may not have worked in the same way but Mark Cirillo and Scott Sell are excellent in their roles. Cirillo makes Lewis a sympathetic character and you side with him more-or-less throughout the entire film as he really showcases the internal struggle Lewis goes through in terms of his feelings towards Cooper. Scott Sell matches Cirillo’s performance moving from panic-stricken to assertively sexual with ease. Cooper is a complicated character and Sell really convinces giving the viewer reasons to understand his behaviour.

The Last Straight Man is a movie that is rather surprising and delivers plenty of satisfying pay-offs. The film is sexy, emotive and will make you think as you watch it. It explores the greys that exist in life and it’s easy to argue for either of the characters. With strong performances, a tight script and impressive direction, The Last Straight Man is one of those rare nuggets you find once in a while. It could work very well as a stage play should Bessenger want to keep the movie alive once the DVD release has been and gone.

Watch the trailer for The Last Straight Man below: