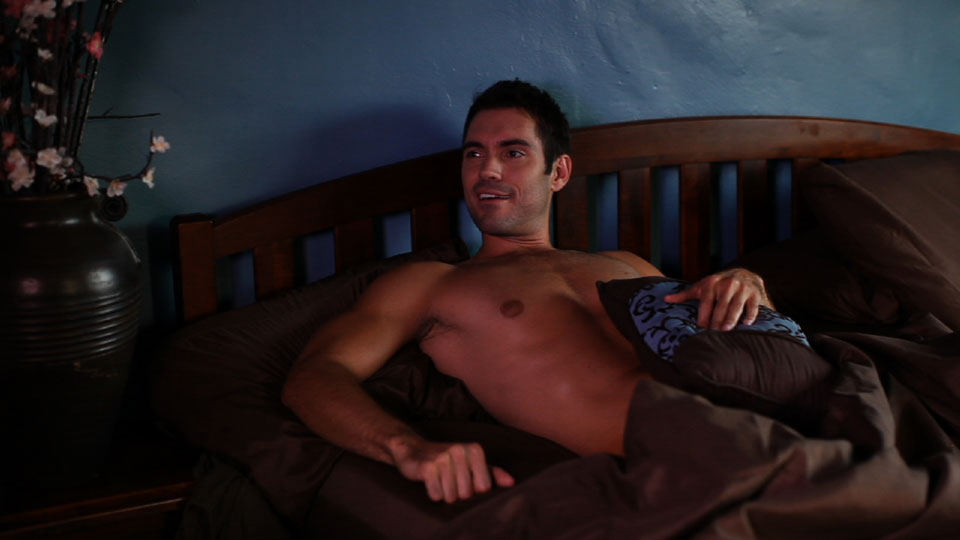 Actor Benjamin Lutz has been a familiar face in gay cinema over the past few years. Most notably he’s won our hearts in the romantic comedy-drama The Love Patient.

For his latest project he’s teamed up with writer/director Rob Williams for The Men Next Door which tells the story of an unconventional love triangle that would be most people’s idea of a nightmare.

We caught up with Benjamin to talk about the film, discuss getting naked and find out what he’s got coming up in 2013.

How are you? What have you been doing before this Q&A?

Doing very well today, visiting my family in Texas this morning before a flight back to California.  They all say hi.

The last time we spoke to you ‘Bite Marks’ and ‘The Love Patient’ had just been released on DVD. Now you’re the star of ‘The Men Next Door’. Tell us about the movie.

I’m very proud of the release of Bite Marks and The Love Patient, both still available on DVD…hint hint.  The Men Next Door is a new fast and fun romantic comedy with something for everyone.  It’s zany plot is about a guy dating two guys who just accidently happen to be father and son.

You play Colton. What so we need to know about him?

Colton is a ‘bright young thing’ –great job, great life, great body.  Trust me, Hollywood is full of this type.  I was excited about acting all the moments when Colton’s life gets changed by the messiness of love.

The situation played out in the movie is quite an unusual one. What would you do if you found yourself in the same situation?

Luckily my character has all the ‘Oh my god!’ moments in the script.  Acting weirded out by the situation came easily to me.

You worked with writer/director Rob Williams on the movie. What is he like to work with?

He’s a warm and smart director.  There was a specific scene I was very eager to shoot where my character makes an emotional plea.  We shot the first take, Rob took me aside.  He really liked where the scene was going, but I could tell he thought there was something missing.  During this conversation, he noticed my hands were in my coat pockets.  He said, “that looks really cool, keep your hands in your pockets like that.”  We did a second take like that and it was the one we used.  After seeing the movie, it’s clear to me afterwards.  If Rob were to tell me that my hands were flailing about too much, that’s all I would have been thinking about.  It’s a small moment in hindsight, but very indicative of Rob’s giving and sharp sense of working.

What is your favourite recollection from filming?

My favourite stories are all inside jokes, everyone on set had such a wicked sense of humour.  I found that a bunch of my notes from Rob were, “do the next take just a little sexier.”  I told him his notes made me feel frigid.  Without missing a beat, every acting note after that was “can you do that sexier?” & “can we try the next take a little sexier?”

The role requires a bit of nudity. Does it daunt you to have to get your kit off on screen or do you quite enjoy it?

I was very shirtless for a lot of the shoot, and I was missing the enjoyment of beer.

What did you do to create the chemistry with your co-stars Eric Dean and Michael Nicklin?

There was nothing to forcibly create, both Eric and Michael are great kindhearted guys.  There was a connection from first meeting.  It’s a wonderful thing in this industry to wrap a project and gain some real friends.

What is your next project?

I just finished helping produce Mark Bessenger’s (director of Bite Marks) next project called The Last Straight Man.  We’ve finished all principal photography and are hard at work in post.   Crossing some fingers over some great acting roles in talks about this next year

What is your hope for 2013 in terms of your career?

It’s hard to look in a crystal ball, most of the things I am most proud of doing in 2012 weren’t on my to-do list.  In hopes to keep making things I can be proud of at this time next year.

The Men Next Door is on DVD now through TLA Releasing.

In this article:Benjamin Lutz, The Men Next Door, TLA Releasing