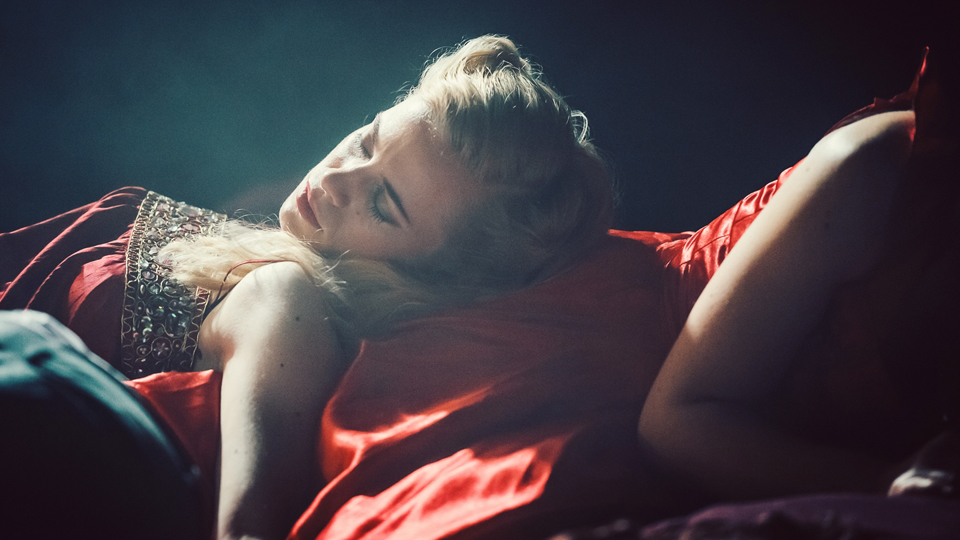 A harsh midwinter, a hard frost on the ground and heavy snowfall: not the usual setting for Shakespeare’s A Midsummer Night’s Dream, but Lazarus Theatre Company’s latest production, following on from their sensational musical The Hatpin, transposes the comedy to this time of year, with a bleak forest of skeletal silver trees forming the backdrop to Fairyland and Athens on the stage of the Blue Elephant Theatre.

The opening sequence sees a long banqueting table set for a feast, and the dilemma of Hermia facing an arranged marriage to Demetrius when she loves Lysander. If long tables downstage seem an oddly static choice, the reason soon becomes apparent, as it traps the characters in an awkward, inescapable social gathering from hell (we’ve all been there!).

A bell sounds and previously silent characters spring to life – they are the actors who are preparing to put on a show. It’s a snappy transition, and suggestive of the Lazarus approach to storytelling – this is an eighty-minute rendition of A Midsummer Night’s Dream, with text, movement, lighting and sound combining to tell the story in an approach that is more filmic than ever. Blasts of organ and harpsichord during longer transitions lend the production a richly operatic quality, which is matched by the costumes of the royal household and the Fairies.

The banquet gives way to the woods and Fairyland as the plot strands take turns. The most successful aspect of the production is the actors preparing their rendition of Pyramus and Thisbe. Benjamin Archer has clearly studied every director he’s ever worked with, as his corduroy-clad Peter Quince veers delightfully between hopeful idealism and world-weary resignation when the performances fail to match up to his artistic vision. James Taylor Thomas is a riot as Bottom, the incorrigible ham actor who thinks he’s one of the greats. It’s a brilliant performance of a staggeringly awful actor, and as such is killingly funny (there’s a slight deviation from the original text with a vocal warm-up exercise – I won’t spoil the surprise!) It’s a self-referential subplot that pre-dates Extras by a few hundred years, and this production as much as any other, is dedicated and hilarious at taking the proverbial out of prima donna peers who fall short in the talent department.

The other subplot involves the Fairies, and the ever-excellent Alice Brown is perfect as Titania: sensual, assured, and at times vulnerable too. Her coven of fairies (or whatever the collective noun is) in deep red dresses, seducing Bottom over a layer of ice white sheets seems to owe some small debt to Stoker, but off-played by Taylor Thomas’ effete and comical Bottom, it’s a great scene. Michael Bagwell is perhaps a touch austere as Oberon, who remains in a bad mood throughout.

There are some great individual performances and moments. The showdown between Hermia, Demetrius, Helena and Lysander is superbly handled. Of the attractive foursome, Ewa Jaworski’s earthy Helena is particularly appealing – strongly-defined, warm and with a fine line in withering put-downs involving heightism.

The condensed telling of Shakespeare’s complex and interwoven plot will benefit those already familiar with the story, though this is especially urgent given the doubling up of parts. That’s not to say that newcomers to the play won’t be rewarded by close attention – it’s all there: the economy of storytelling and pace of exposition is breathtaking.

A Midsummer Night’s Dream is a real winter night’s treat. Slick, stylish and visually stunning, it’s as warming as a large glass of claret.