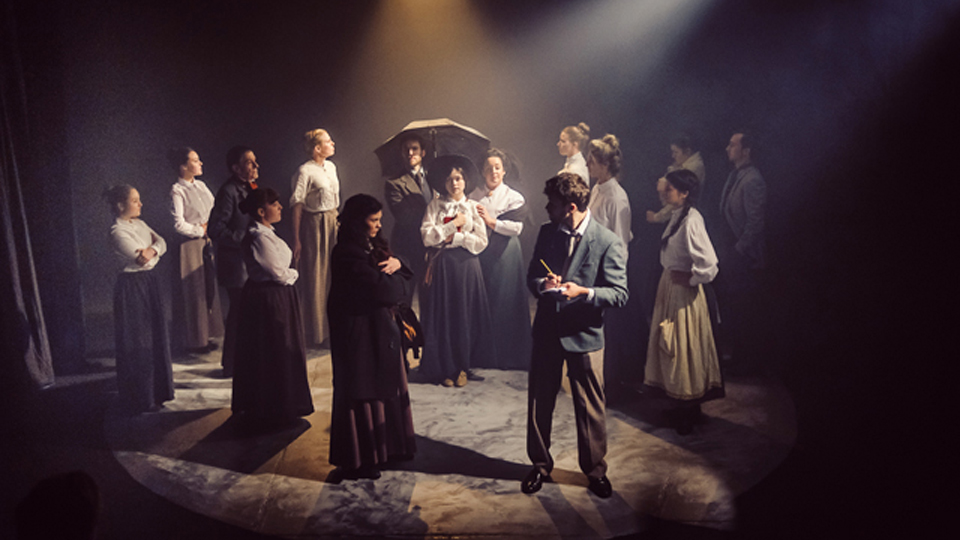 Australian musical The Hatpin enjoys its European debut at the Blue Elephant Theatre in Camberwell. Set in the late Nineteenth Century, it tells the shocking true story of Amber Murray; a young woman forced to hand her child born out of wedlock over to the Makins, a foster family, and then pay for his upkeep with what little she can muster from menial work.

Although Amber is promised that she can visit her son every fortnight, the Makins always palm her off with an excuse. When they disappear from the neighbourhood, Amber is determined to find them and reunite with her son whatever the cost. She soon discovers that she’s far from the only unmarried mother who entrusted her infant to the Makins, never to be seen again; but the social disgrace of bearing bastard children ensures a conspiracy of silence, leaving her to fight the battle to find her child alone.

The Hatpin is a dark, disturbing piece, but by no means unremittingly so. Lyricist James Millar does much to weave moments of tenderness and humour into what emerges as a macabre and chilling story. There is a rewardingly complex bond between Amber and Harriet, her boss at the fruit store. Amber finds a confidante: Harriet finds an outlet for her affections. If their friendship lends The Hatpin a welcome glow of warmth, then the dreadful Makin family provide the laughs. Agatha and Charles Makin are painted like Dickensian grotesques; selfish, cruel, and with all the funniest lines. Their weird daughter Clara, the eccentric product of twisted parenting and a sheltered upbringing, provides another angle to the sinister family from hell.

The production is quite a departure for the Lazarus Theatre Company, whose usual output concentrates on the classics. Yet at the same time The Hatpin bears all the unmistakable hallmarks of a Lazarus show. Where their productions generally incorporate movement and dance elements, these become integral parts of the musical, especially in the punchy actions of the chorus. The Hatpin retains Lazarus’ usual flair for strong visual theatre too. Simple but highly effective lighting lends it a filmic quality, and the rich fabrics of the costumes quickly distinguish characters and add texture. A constant layer of smoke provides an Australian haze, but also blurs the boundaries of the black box stage giving the illusion of space and depth. Ricky Dukes’ assured direction also adjusts for musical theatre, with moments of stillness punctuating the action, allowing the actors to carry the story through song.

Music is provided solely by piano, which is the only instrument melodically rich enough to orchestrate alone. The unvaried instrumentation is intense, but Peter Rutherford’s score is richly melodic, with some deceptively complicated off-beat melodies that meet with assured vocals.

Such an emotionally rich piece requires great performances to convince, and the cast aren’t found wanting. Gemma Beaton takes on the lead role of Amber, giving her an earnest conviction in her quest for justice, with achingly beautiful vibrato every time she’s required to sing. Her scenes with Eleanor Sandars’ grounded and loveable Harriet are exquisitely played by both actors; but Beaton admirably lives up to the requirement to carry the audience through the story with her.

The Makins form a hugely enjoyable unit. Robin Holden and Kate Playdon as the parents offer shades of the Thénardiers from Les Misérables. Whereas Holden plays it with sufficient likeability to allow the audience to find chinks of decency in him, Playdon’s Agatha is outrageously larger than life, bordering at times on pantomimic villainy. The result is gloriously funny: and therein lies the reason it works so well. You’ll laugh as her vanities and absurdities are held up for ridicule; then question your own reaction as the full depths of her depravity are revealed.

Another standout performance is Emma White as Clara, the quirky and endearing Makin child. Her funny eccentricities are delightful throughout, but her solo performance at the dénouement is incredible: frightening in its conviction and raw emotion. It made the hairs on the back of my neck stand on end.

The Hatpin ties in to the much more recent scandal of the generation of infants stolen by the church from their unmarried mothers in the Australia of the 1950s to 1970s. The traumatic consequences for the survivors still resonate around the shared shame of the complicit Australian authorities and Catholic Church. Their inhuman treatment of unmarried mothers has come to symbolise the dark side of post-colonial Australian history.

Whilst it’s understandable that the story emerged from Australia, it will shock and move audiences everywhere because it forces us to examine what happens when the universal bond between mother and infant is broken. Even though the West has largely emancipated itself from the grip of stifling religiosity, and Amber Murray’s life now would be more hopeful, The Hatpin remains a cautionary tale, retaining the power to shock and enthral because societies tend to find new ways to neglect and abuse vulnerable children.

There are a few elements to the structure of The Hatpin I was less keen on – moments of exposition-heavy dialogue and a second half courtroom drama – but they weren’t enough to detract from the show being thoroughly entertaining and emotionally gripping. The Lazarus Theatre Company never fails to impress, and The Hatpin raises the bar for ambitious fringe shows once again.