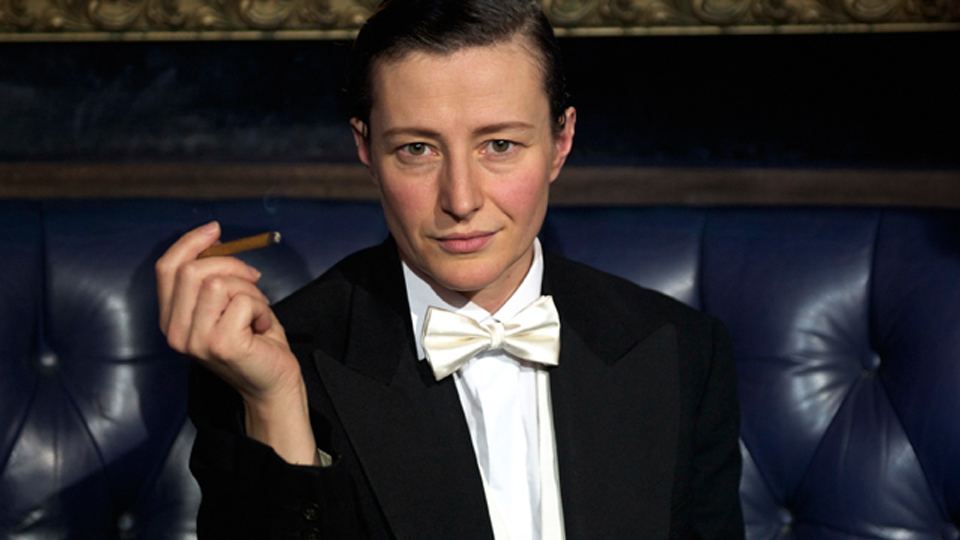 With Mack and Mabel earlier this year, director Thom Southerland brought the glitz, glamour and production values of golden era Hollywood to the gritty Southwark Playhouse. With Victor/Victoria he employs a broadly similar blueprint, once again resurrecting a forgotten classic (the 1983 film version starring Julie Andrews is perhaps the best known), and giving it a damn good polish. The end result this time around isn’t quite as tightly-executed, and the complex story lacks the crowd pleasing, knock-out punch of its predecessor – but it’s still fantastic entertainment.

Then again, Blake Edwards’ story is an intriguing one, and despite being decades-old, feels very current; the script ask questions about sexual and gender identity that are daring and honest, even by today’s standards, and is delicate without compromising on wit or style.

Victoria Grant (Anna Francolini) is a struggling singer in 30s Paris; after much persuasion from zany and fabulous new gay best friend Caroll ‘Toddy’ Todd (a comically on point Richard Dempsey), she hatches the unlikely plan of pretending to be a female-impersonating man. Fooling everyone, she swiftly finds blockbuster success. But when straight-identifying man’s-man/gangster love interest King Marchand finds himself inexplicably attracted to Victor, Victoria’s disguise becomes increasingly precarious.

Francolini deserves ample credit for her diplomatic and thoughtful take on a complex individual that, in the wrong hands, might’ve come off either too conflicted or too silly; she channels a vulnerable young woman one minute, a tuxedo-donning young man with a confident swag the next, before one of her climactic turns in full drag getup, filling the theatre with character and hilarity. Nevertheless, there is a warmth and a humanity linking the three together that keeps Victoria relatable and the story convincing. A lot of this is down to Francolini’s affectionate relationship with Dempsey – they have a fantastically zesty BFF chemistry that really drives the play.

In fact, despite some very energetic and elaborate song and dance sequences (that the limited rectangular strip of space available struggles to accommodate) and Jean Perkins’ effortless scene stealing (interestingly, her presence is also shape-shifting, and of her handful of hilarious characters, from lazy waitress to stuck up society woman all possess a familiar vein of nonchalance), the best scenes are between Francolini and Dempsey alone. Upon their first meeting, when they profoundly click while under no pretences, their excitement is infectious; here, the play makes a strong statement about the power of friendship.