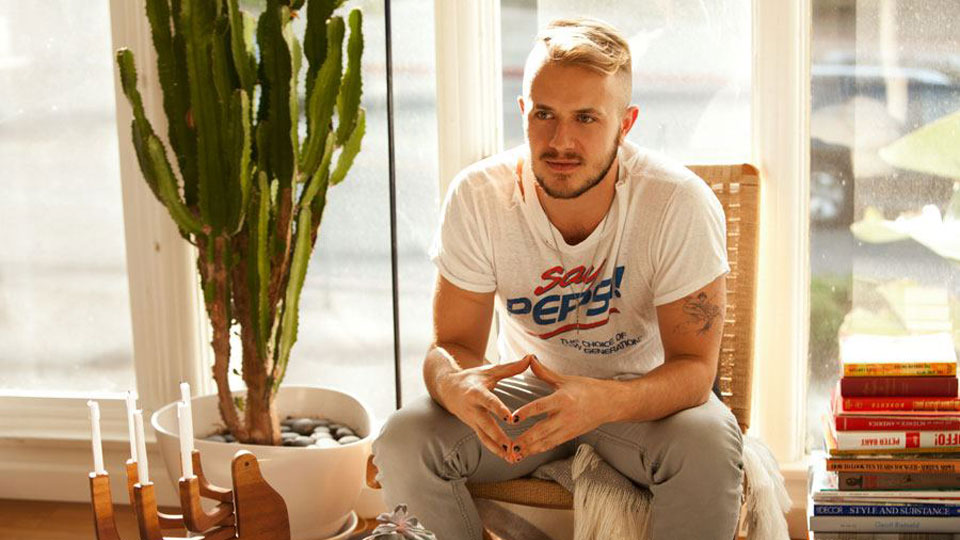 Our Hollywood’s Hottest week is proving to be quite the hit with you lot it would seem and you’ve been devouring our interviews with Steven Dehler and Matt Palazzolo.

For Day 3 of Hollywood’s Hottest we’re moving our spotlight onto Nathan Carden, a production designer in Hollywood who made his feature film debut recently working on J.B. Ghuman Jr’s critically-acclaimed movieSpork.

We caught up with Nathan to find out exactly what his job entails, talk about his experiences on Spork and to discover what his favourite job to date has been.

Oh I’m doing alright.  I am currently in my office at Varsity Pictures/AwesomenessTV wrapping out a show called IMO.  We shot all weekend and I’m pretty exhausted.

You’re making quite the name for yourself as a production designer in Hollywood. Explain to us exactly what your job entails.

Why thank you!  As a production designer I am charged with the task of designing the look of the film/show/music video.  Basically I create the world that the characters exist in whether it is the bedroom of a little girl or the bridge of a space ship, it’s my job to conceptualize that and bring it to life.  There are a million moving parts to my job, but to put it simply, I am the head of the art department.

How did you get into production design in the first place? Is it something you always wanted to do?

I actually fell into the position!  I studied fine arts at the University of California at Santa Barbara and straight out of college was working at MTV in the casting department.  I have a lot of creative friends and through my social network I started designing sets and props for music videos and web shorts.  It was more of a hobby than anything.  I am a huge fan of movies with elaborate sets and props that were physically created for the film (The Dark Crystal and Mad Max: Beyond Thunderdome to name a few) so when I was asked if I could create a ten foot wide, seven feet tall “wig” for a music video, I jumped at the chance!  I missed creating things and the prospect of getting to do so with other people’s money sounded too good to pass up.  I was working a lot with JB Ghuman Jr. for a few years when one day he called me and told me he had sold this script he had written and wanted me to production design it.  I was faced with a choice, continue doing casting, or make the leap into doing production design as a career.  It was scary as hell, but I made the leap without a safely net.

I never knew production design was a job growing up, but was always fascinated and loved movies. I have always been a dreamer and my imagination is something I have always treasured and nurtured.  I have an incredibly varied skill set and it fit perfectly with the job.  I got lucky in that regard.

Your movie debut was J.B. Ghuman Jr’s fantastic ‘Spork’. Tell us what that experience was like for you.

The experience was eye opening to say the least. Haha. I had to interview for the position and do a bit of lyingconvincing to the producers that I knew what I was doing.  The truth is, I had no clue what I was doing.  I hired on one of my best friends (Orlando Soria) to help out and together we fumbled our way through the film.  It was probably the best learning experience I could have had.  It was one of the most intense 30 days of my life and through the experience I learned the basics of my design process and that Production Design was exactly what I wanted to do with my life.

‘Spork’ is such a wonderfully quirky movie. Did you have to design to a brief or were you given freedom to shape things as you wanted?

With Spork I was given sort of free reign to do whatever I wanted.  I think because I had worked with JB on so many other projects, he gave me carte blanche.  We had lots of discussions about who the characters were and their back-story, that I shopped for and designed their rooms from their perspective.  It was pretty low budget so I had to get really creative with some of the spaces.  I wanted the individual bedrooms to reflect the characters and offer the viewers an insight into the character’s psyche.  Because the film is set in sort of a “Hyper Reality” I was able to really have fun with things.  For me, it was the perfect first feature film to design.

What’s been your favourite project to work on so far and why?

Tough question!  I designed a music video for called Strangers for this artist Melinda Ortner. It featured the Lucent Dossier Experience.  They were incredibly inspiring to work with because they bring so much to the table.  I felt like I really had to step up my game and the end result speaks for itself. I feel like every project I work on is both the hardest thing I’ve ever done and also my favorite.  It’s one of the aspects that I treasure about my job.  I am always challenged.

This week my latest feature film will be premiering at the Hollywood Film Festival.  It’s called Lost On Purpose and stars Jane Kaczmarek, C. Thomas Howell and James Lafferty.  I also got to work with Oscar award winner Octavia Spencer, which was a real treat!

Stay inspired!  I am constantly looking around for inspiration and banking ideas.  I am constantly being called upon for the big idea and so I try and always keep my brain working.  Don’t give up!  It’s a very tough job and requires a sort of patience, drive and determination that is more learned than born.  You’re going to face innumerous roadblocks but that’s all right.  Everyone makes mistakes and nothing is ever easy.  Always be designing!  I think it’s really easy for people to take the easy road and get a job working for someone else.  If you want to be a production designer, find your own projects.  You might learn a lot being someone else coordinator or PA, but at some point you’re going to have to take the big leap and put your own ass on the line.  You might as well do it now!

Where do you see your future? Is production design something you want to continue doing or do you have aspirations to expand into other areas of the entertainment industry?

I am aiming for the top!  I am a very tenacious person and am doggedly chasing my dream of Oscar Gold (yes, I plan on winning an Academy Award some day). I look forward to playing with mega budgets.  I cannot wait to design and build a city and then blow it up! I’m not sure if I’ll always do production design.  I think it is a natural progression to want to take more control of the projects and thus I started writing this year.

My main goal is that I want to inspire and influence people’s dreams.  I want to create worlds that children fantasize about and explore with their own imagination.  I would love to be remembered for that.

What other things interest you when you’re not working?

I do my best to stay inspired.  I work with A Club Called Rhonda and patrons are all on the bleeding edge of fashion and culture and I study them fiercely.  I go to the movies a LOT when I’m not working.  I love seeing films during the day by myself.  I love to explore new places and travel whenever possible.  When I have down time, I like to give my imagination enough space to wonder.

Right now I am reading through a few scripts trying to figure out what my next big move should be.  I have a couple of feature films in the pipe line and some artist film shorts. Expect BIG THINGS in 2013!!!

In this article:Nathan Carden, Spork