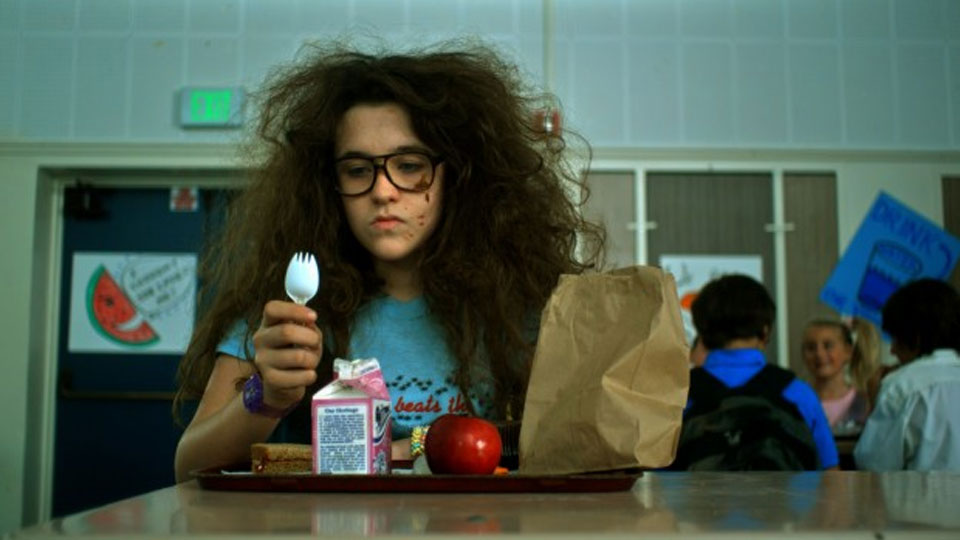 Spork (Savannah Stehlin) is an outcast at school and is constantly teased about being a hermaphrodite. With her trailer park neighbour Tootsie Roll (Sydney Park) as her only ally, Spork becomes the target for the school’s mean girls lead by Betsy Byotch (Rachel G. Fox). When Spork learns of a school dance competition she decides it’s her way of gaining the mean girls’ respect and she finds herself unexpectedly falling in love along the way.

Spork is a colourful, quirky and refreshing musical comedy from writer/director J.B. Ghuman Jr. Centering on the titular character the film is a funny, emotive and wonderful little movie that wins your heart whilst making you laugh your socks off. It’s a brave move for Ghuman to write his central character as a young hermaphrodite and it certainly gives Spork a refreshing twist.

There are lots of great moments in Spork and the relationships that unfold on screen are genuinely quite touching. Spork connects with Charlie (Michael William Arnold) a boy that everyone thinks is gay but he insists he just has two gay dads. The two youngsters share some of the movie’s best scenes and they find comfort in each other’s inability to fit in at school.

The film is soundtracked by music from the 90s and it gives the perfect backdrop for the movie. There are lots of dance sequences throughout the movie with Betsy and her gang of bitches performing a number that reinforces how much they rule the school.

Central to the film’s success is its young cast and they all have bright futures ahead of them. Savannah Stehlin is superb as Spork and she gets the balance between awkward and odd just right. Stealing every scene she’s in is the sparky Sydney Park as Spork’s feisty neighbour Tootsie Roll. Armed with a foul mouth and enough attitude to give anyone a run for their money she’s absolutely hilarious. Rachel G. Fox also impresses as queen bitch Betsy. We last saw her in Desperate Housewives as Tom Scavo’s meddling daughter, and in Spork she puts in a confident performance that is beyond her young years.

Spork is a real treat and a film that we highly recommend. Imagine Juno with a twist and you’re part way there. Ghuman has created a wonderful world where standing out is more special than fitting in. If you want your heart warmed and your ribs tickled then Spork is definitely the film you need.