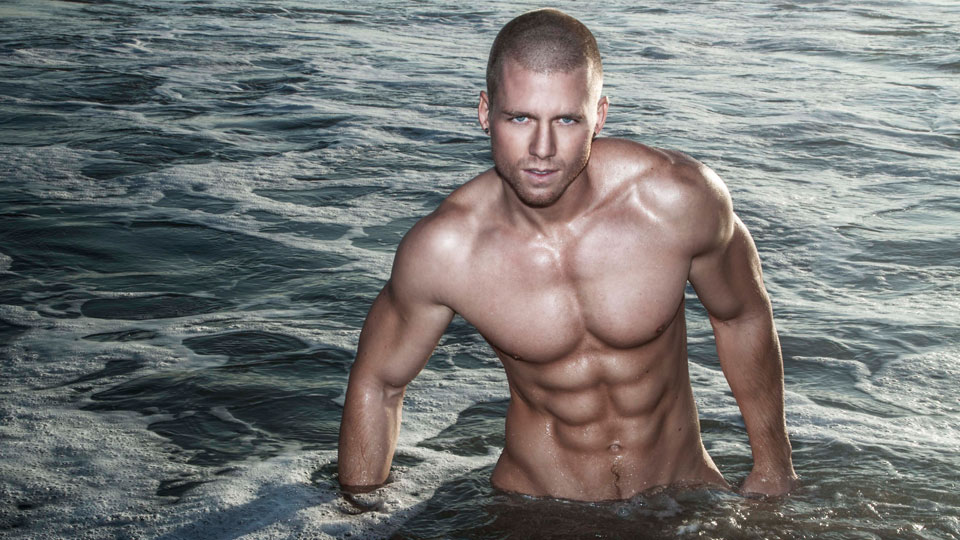 All week we’re bringing you interviews with the hottest rising stars in Hollywood so you can get to know who they are before the rest of the world does.

During our recent trip to West Hollywood, we met Steven at The Abbey bar on Santa Monica Boulevard where he works as a go-go dancer. Impressed with his physique and his moves, we decided to get to know him a little better.

In our interview Steven talks about being a go-go boy, tells us all about his modelling career and reveals why he loves Britney Spears so much.

I’m great! I’m a little sore – just had a workout.

You came to our attention as the hottest go-go dancer in West Hollywood’s The Abbey. How did you get into that scene?

I started working as a server in small bar in West Hollywood a little over a year ago and I didn’t enjoy it very much. From that I also got a job as bottle service at club Eleven, but I just felt stagnant because I had been serving for a few years on and off in between going to school and I was ready for something different. One night at one of the clubs I entered a hot body contest and ended up winning. One of the Go-Go boy bookers saw me and asked me if I’d like to dance. It was something I never really considered doing, but I decided to give it a try. Eventually I danced practically everywhere in West Hollywood and I’ve really enjoyed it. I now only dance at The Abbey so if you’re out visiting in West Hollywood you’ll most likely find me there.

You can’t be shy to be a go-go boy and you look so confident on stage. How do you stay so comfortable wearing so little with crowds of people lusting over you?

Well, I had done a lot of underwear and swimwear modelling prior to go-go dancing so I was already pretty comfortable wearing little amounts of clothing. But I do admit, the first time I walked around a club in just my underwear was a little uncomfortable. You’re in an environment where everyone is dressed up and you’re walking around leaving little to the imagination. You definitely have to be comfortable in your own skin to do this job.

You’ve built quite the portfolio up over the last few years as a model. Why did you decide to go into modelling?

If you asked me when I was in high school if I’d ever consider modelling, I’d think you were nuts. I was a scrawny, pimply kid with very low self-esteem and never really thought much about my physical appearance. It wasn’t until about a year after high school that I had met a gorgeous girl, who would become my best friend, and she asked me if I’d ever consider modelling. She had been a model since she was fourteen and I thought to myself, “If someone this beautiful thinks that I could model maybe I should check it out.” And from that I hit the gym, my skin cleared up, and a few years later I’m shooting for magazine covers and spreads. It’s been a really fun journey so far and I can’t wait to see where it takes me.

Your shots are generally risqué but artistic. What attracts you to the modelling assignments you choose?

I’ve done a wide variety of shoots over the years and when it comes down to it sex sells. I wouldn’t say that most of my shoots are risque although I have done some nudity. I do mostly underwear and swimwear modelling so generally I’m not wearing much, but it’s not a determining factor in whether or not I choose an assignment. I really enjoy modelling whether I’m modelling a $12k fur-leather trench coat or jockstrap. What attracts me to working with certain photographers are ideas that haven’t been done before.

Part of your appeal is obviously your physique. How difficult is it to maintain that impressive body and what workouts do you enjoy?

Maintaining used to be difficult until I changed my outlook on it. Once I realized that working out isn’t simply a hobby, but a lifestyle, it became much easier to be consistent. Consistency is very important to keep a healthy and fit body. It’s not something I look at as an extra-curricular activity, but more a daily routine. For some people their morning routine is to get up, make breakfast, have a cup of coffee while reading the newspaper and then head to work. For me, my morning routine involves a pre-workout routine to get my blood flowing, a quick breakfast, and then off to the gym for my morning workout. It’s what I do almost every day so it’s become habit for me and it throws my day off if I don’t do it.

When you’re not working, where are your favourite places to hang out in West Hollywood and why?

Usually when I’m not working I’m at home. My job involves being around a lot of people all the time. There’s music and noise and people are drunk and rowdy so I really don’t take my downtime for granted. Also the modelling industry is very last minute. You won’t know you’re booked for a gig most of the time until the day before. Most castings you get notified the day of. So when I’m not go-go dancing or at a shoot I’m usually hanging out at my apartment with friends.

We hear you also play the piano. Is music something you’d like to pursue in your career or is it just a hobby?

You heard right ha ha. I’ve played the piano for about eighteen years, classically trained for ten of them, and over the years I’ve considered pursuing it further. I’ve had a few gigs here and there, but overall I really just enjoy it as a hobby.

We also hear you have a little bit of an obsession for Britney Spears. What is it about her that you love?

Ha ha yeah, I guess it’s a little bit obvious. I’ve always really enjoyed her music. She’s my favorite artist to listen to while I’m working out and while go-go dancing. Her music makes you want to dance.

What other things would you like to branch out and do in the future?

I’m curious to head out into acting, comedy specifically. I’ve done a few things here and there and I really enjoy comedy. It’s my favourite genre to watch and I love making people laugh. If you ask any of my friends I’m a giant goofball and don’t take myself, or most things, seriously at all. We’ll see what happens, but keep an eye out for me 😉

Find out more about Steven by following him on Twitter @StevenDehler

In this article:Hollywood's Hottest, Steven Dehler