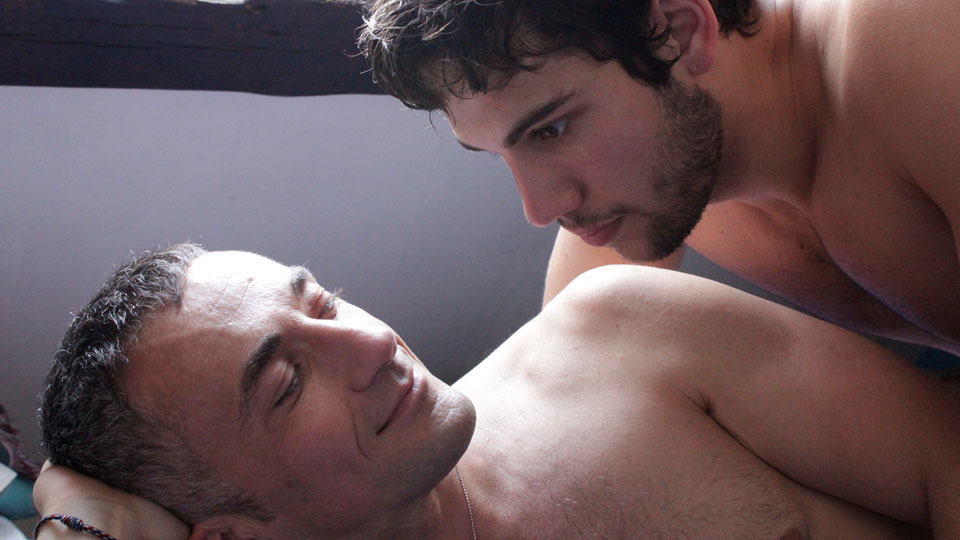 Claude (Yann de Monterno) finds handsome young Brad (Kevin Miranda) drunk and lost in the street. Not able to find out where Brad needs to go, Claude takes him home and puts him up for the night. In the morning Brad takes Claude by surprise expressing his thanks in a rather intimate way. Quickly the two men bond and their attraction leads to a passionate love affair that takes them both by surprise. The only problem is that Claude has no idea who Brad really is or what he’s getting himself into.

Bad Boy Street is the latest movie from writer/director Todd Verow and is co-written by Jim Dwyer. The movie draws some immediate comparisons with British gay hit Weekend sharing a similar storyline. Despite the initial similarities Bad Boy Street soon takes a few twists and turns that really surprised us and the story fleshed out in a much more satisfactory way than we expected at the beginning.

At the heart of the story is the dynamic between Claude and Brad. The two characters work really well together and that’s mostly down to the actors playing them. Yann de Monterno plays Claude in a very sweet and naïve way whereas Kevin Miranda is more forceful as the mysterious Brad. You genuinely believe the two men have fallen for each other and that’s the reason the movie succeeds. Claude’s friend Catherine (Florence d’Azemar) is an unnecessary addition to the story and she doesn’t really get to do a great deal. The movie could have done without the character and just concentrated on Claude and Brad.

The one thing we didn’t particularly like about Bad Boy Street is the soundtrack. The score doesn’t really fit with the story and we found ourselves reaching for the mute button. It dominates the first 20 minutes of the movie to the point we thought we were watching a silent movie.

Bad Boy Street is a short but sweet movie that was better than we expected it to be. The story is fairly strong, the performances impressive and the conclusion satisfying. Like Weekend it succeeds because it manages to create to realistic and believable characters and you root for them throughout the movie. Despite the few flaws mentioned, we can definitely say we were pleasantly surprised by Bad Boy Street.