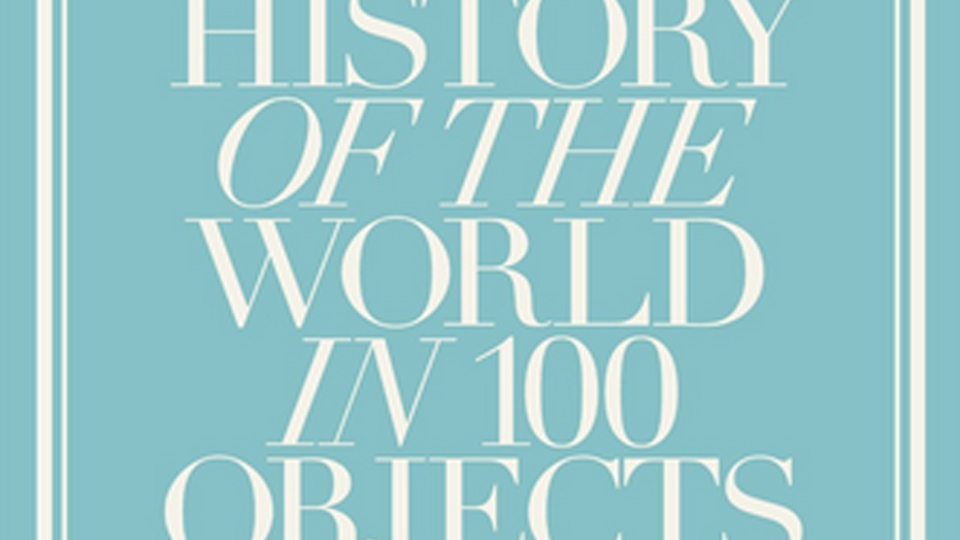 A History Of The World In 100 Objects has already enjoyed an illustrious past. It started life as a Radio 4 series before spawning a beautifully illustrated hardback book complete with transcriptions of each episode and colour photographs of the objects described.

This new edition is the traveller’s version of the book (previously issued in hardback) – it’s an easily held paperback edition which gains compactness at the expense of the vivid illustrations (there are small one-tone pictures of each object at the head of every chapter). It’s printed in an easy-on-the-eye font and the rubber-embossed cover is a lovely design touch and a treat to handle.

A History Of The World In 100 Objects sees historian and director of the British Museum Neil MacGregor look at one hundred objects in turn, dating from a near two million year-old chopping stone found in the Olduvai Gorge in Tanzania all the way through to a solar powered lamp manufactured in China in 2010. All the objects are in the possession of the British Museum and have stories attached to them that MacGregor relates over one hundred short (at 550 pages that’s an average of five and a half pages per item) but scintillating chapters. Within this framework MacGregor encompasses objects from many civilisations spread over many areas of the globe.

In truth, the title is misleading and overstates the case, since what is actually offered is a potted history of humanity – the world quite happily coped without Homo sapiens for billions of years before we evolved into existence and would do so again should we die out. That’s a minor quibble, but one worth raising because the scope of the book is not only narrower than the title suggests but narrower than any history concentrating solely on humanity should be. It’s narrated entirely from a human point of view and concentrates on the tools that we use and the art we create. It has little to say about our (crucial) interactions with other species, such as domesticated animals and livestock, and surprisingly shows virtually no interest in science and its application in the improvement of human health. There are no farming implements, medical supplies or scientific apparatus – the bulk of the list comprises aesthetically pleasing artefacts with no practical application.

Despite the equivocation that the tome is much more limited in scope than its ambitious title suggests, MacGregor’s work is a magnificently readable minefield of fascinating human history. It’s a great book for dipping in and out of, and each chapter takes you to a different part of the world to a different time and culture, offering one hundred different perspectives of the human story to date. It is a teasing book, and with any thirst for historical knowledge of a particular subject or era, it won’t sate you, but it will hopefully leave you wanting more.

A History Of The World In 100 Objects very successfully provides snapshots – tasty morsels of much larger and inevitably interconnected stories. It opens with the Egyptian Mummy of Hornedjitef, dating from the Third or Fourth Century BCE. It’s an appropriate way to open a book since many visitors to museums, especially children, head first to the mummies. MacGregor gives a personal account of how his interest shifted as he matured from the macabre contents to the significance of the sarcophagi.

The book is split into a series of sections in which the items are loosely connected, though they prove unnecessary and not wholly convincing as the histories that MacGregor narrates often have overlapping themes. The Rosetta Stone from Egypt reveals inscriptions in three languages including Egyptian hieroglyphics which tells us about the way people communicated and about how dynasties come and go. A coin showing the head of Alexander the Great from Fourth Century BCE Turkey shows that there’s nothing new in using an idealised image of a leader on money for purely propaganda purposes which the presence of Mao on Chinese banknotes may suggest. Money is discussed several times more with a Chinese banknote from the Ming dynasty that saw the advent of paper money; Spanish pieces of eight (of pirate parlance notoriety) and, at the end of the book, a credit card in a chapter that examines Islamic finance.

Places link items too, and chapters spread very far apart chronologically can feel related. From Britain, the Mold Gold Cape from Wales, close to four thousand years old, is an extraordinarily well-preserved and finely crafted article that tells us a lot about our local history – though frustratingly we don’t know the identity of the person buried in the cape. The Sutton Hoo helmet, from 600 CE, is probably the most iconic historical English artefact, and its story reveals truths about our Anglo-Saxon ancestors and even the legend of Beowulf.

The great English explorer Captain Cook appears in two chapters. In one his death is recounted in the story of a Hawaiian feather helmet as a way for MacGregor to illustrate “a textbook study in anthropological misunderstandings” and the impossibility we face in seeing the world through the eyes of another time and culture, despite the best hopes of an historian’s impartiality. Cook reappears in a chapter on an Australian Aboriginal bark shield, and how his legacy has been viewed very differently by both Aboriginals and modern day Australians in the intervening years.

The New World is well-represented, with articles such as a ceremonial ballgame belt from Mexico and a gruesome Mayan relief depicting royal bloodletting from a slightly later period, and the story of the end of the New World civilisations after the Spanish conquest is incorporated. MacGregor retains tight focus throughout on what unites our human story, and what we can learn from when civilisations have catastrophically collided. In that spirit he ends his account with a solar powered lamp that he manages to make about not only world poverty but also our need to find renewable energy sources for the sake of future generations.

Each chapter uses quotations to back up MacGregor’s basic thesis from people who are world leaders in their fields. Thus we have geneticist Professor Steve Jones talking about deep time in a chapter on the chronometer from HMS Beagle (the ship that carried Charles Darwin on his famous voyage) and Mervyn King, governor of the Bank of England on economics. However some of the guests can be dismissed as misguided sops towards populism. Bob Geldof is undoubtedly an expert at organising giant charity rock gigs, but is he really the best man to ask about the politics of food?

Despite its very obvious limitations and omissions (there are plenty of masks, stone tools, artefacts and items of jewellery, but, aside from a ship’s chronometer, not a single scientific instrument) A History Of The World in 100 Objects is never less than a scintillating read. MacGregor, to his credit, acknowledges from the outset in a self-deprecating preface (entitled Mission Impossible) that the enterprise is doomed to failure, and arguably even the museum’s collection of several million objects would still only provide a limited history of humanity. Nevertheless, a tome as profoundly interesting as A History Of The World in 100 Objects is bound to leave most readers hungry for more of the same. MacGregor proves enormously impressive with his depth of knowledge about a range of human cultures and eras, and his passion in conveying his subject to a lay readership makes for a compulsively readable book. A History Of The World in 100 Objects may bite off more than it can chew, but it does so knowingly and unashamedly, and instead presents the reader with a book that is never anything less than an absolute pleasure to read. Every chapter is a charming and erudite taste of a single aspect of human history.

Advertisement. Scroll to continue reading.
In this article:A History of the World in 100 Objects, British Museum, Neil MacGregor, Popular History