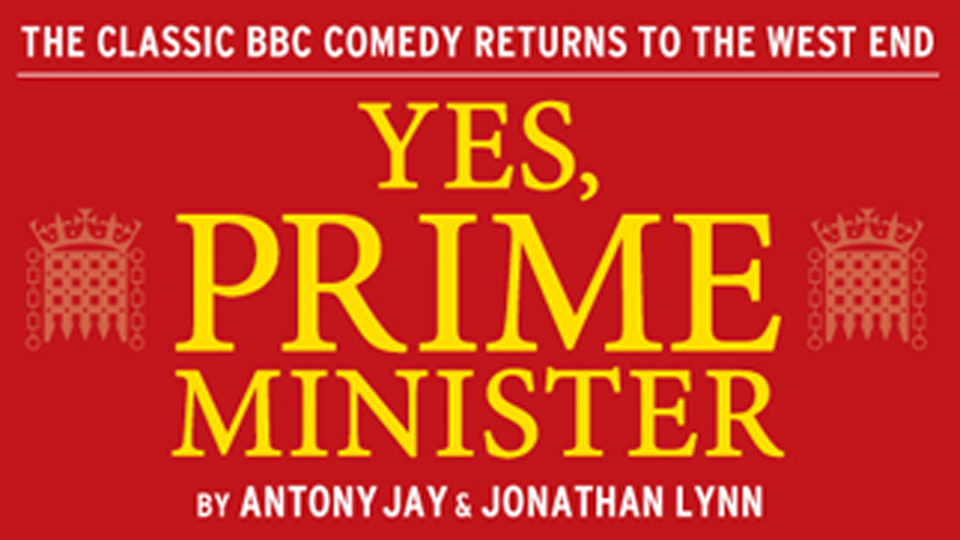 Who knew British politics could be so funny? A bad question, perhaps, but rather than answer it, take yourself along to Trafalgar Studios for an uproarious political comedy. Yes, Prime Minister follows on from the hugely successful and much-loved 1980s TV series which starred Paul Eddington and made Nigel Hawthorne a household name.

This recent stage play, updated for the contemporary political era of the Coalition, is shrewdly written by Anthony Jay and Jonathan Lynn (who also directs), the brains behind the television hit. Their script is laced with cutting satirical barbs and an unremitting barrage of brilliant one-liners, proving they’re still masters of their craft three decades on.Yes, Prime Minister stars Robert Daws (Outside Edge, Roger, Roger, The Royal) as hapless Prime Minister Jim Hacker and Michael Simkins (Foyle’s War, The Iron Lady) as Sir Humphrey Appleby, the oily cabinet secretary who prowls the corridors of power and pulls the PM’s strings.

Jim Hacker is a leader under severe pressure. He’s being blamed for everything from rising unemployment to global warming. When the possibility of a deal worth trillions arises trading with the oil-rich Middle Eastern country Kumranistan, Hacker has to do everything in his power to make sure his meeting with the Kumranistani official results in a signed agreement. Yet nothing goes according to plan, and in the course of a single evening Hacker has to contend with the unusual special requests of the Kumranistani minister, which would involve smuggling call girls into Chequers via the royal helicopter; the smarmy BBC director general who is planning to run an hour-long special on the PM’s multifarious failures; and the cook at Chequers who turns out to be an illegal immigrant…

Yes, Prime Minister is a superbly paced comedy. It’s a slow-builder, easing the audience into the world of Whitehall with carefully set-up jokes which are later paid off in spades as the play hurtles full throttle into magnificent farce. Along the way, a few sniggers develop into chuckles which become belly laughs throughout the second half.

Robert Daws delivers a performance of comic genius. For playing tightly coiled characters who occasionally burst in explosions of anxiety and anger, there’s nobody to rival him. Daws’ ruffled Jim Hacker is reminiscent of Basil Fawlty, but unlike that comic grotesque he’s also enormously sympathetic and touchingly human. He gives you moments where you laugh with pity: unable to cope with a burgeoning crisis he crawls under his desk, lying in the foetal position. Opposites work very well in comedy, and Michael Simkins is suitably erudite, cool and measured as the suave Sir Humphrey, who never panics in a crisis and whose upper lip is never less than rigid. Daws and Simkins are perfectly paired, and their poles apart characters are a joy to watch as they act as foils for one another.

Yes, Prime Minister benefits from an excellent ensemble cast. Clive Hayward is hugely enjoyable as the well-educated and tightly-buttoned Bernard, the principal private secretary; whilst Emily Bruni injects a welcome feminine perspective as Sir Humphrey’s female counterpart, the wise and crafty Claire, the PM’s trusted special policy advisor. There’s room for a few supporting characters, out of which Sam Dastor is delightful as the urbane Kumranistani Ambassador.

Director Jonathan Lynn creates an excellent and thoroughly entertaining show with a strong handle on character and story. He trusts in his well-seasoned actors to be lightening fast on their cues, and uses the single setting to successfully create a claustrophobic environment in which he constantly turns up the pressure. The brilliantly witty script only occasionally lets up when the characters analyse what happened in the previous scene, but perhaps the audience need the odd moments of down time to gather their breath too. Jokes sometimes get lost as they fall hard and fast upon one another, but it’s sure to be one of those shows where audiences laugh loudest at different moments each night; and it’s better to have too many jokes than not enough.

Yes, Prime Minister perhaps tries to achieve too much, with the BBC subplot especially threatening at times to distract from the principal story. Yet it’s a play bursting with comic ideas and sizzling performances, with more than enough sustained moments of excellence to forget all about the odd sections that don’t quite work.

Jay and Lynn follow on from the tradition of writers like Plautus where those in power are subservient to their wiser employees. Yet in Yes, Prime Minister the four main characters are all as crafty as one another, and a large part of the pleasure is in determining who will outwit whom in a neatly poised tussle for control. Join the PM and his motley band of advisors for an evening in at Chequers. You may not be reassured that the country is in safe hands by the end of this superb satire, but you’ll be laughing too hard to care.