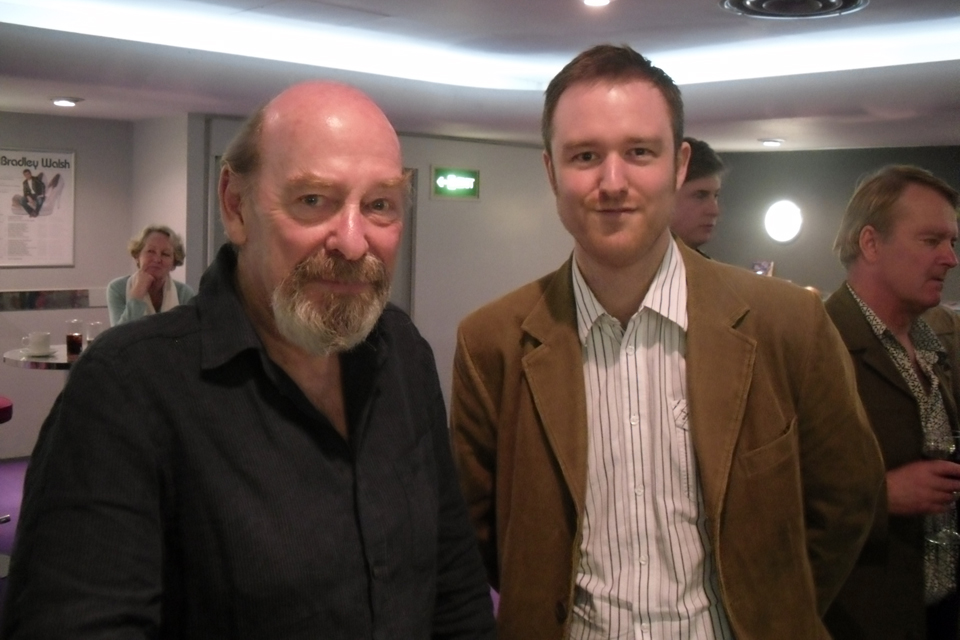 Denis Lill is a very familiar face to television, film and theatre audiences. He’s appeared in projects as diverse as Survivors, Doctor Who, Batman and most recently in ITV’s long-running medical drama The Royal. He’s currently starring in Murder on the Nile, which marks his fourth UK tour with The Agatha Christie Theatre Company.

We caught up with Denis to talk about the show. He spoke about getting into character as a crime-solver, what it’s like working with Kate O’Mara and how audience reactions differ across the UK.

We should warn readers that there’s a minor plot spoiler contained within the interview, but don’t worry – it’s not about whodunnit!

Hello Denis. How are you?

I’m very well, thanks Greg. I’m in sunny Southend-on-Sea. It’s not particularly sunny; but it’s a nice little theatre we’re playing in. Little being the operative word. It’s too small to get all our set up in it, but by the time we come to Derby next week we’ll be having a much bigger set.

We spoke to you two years ago when you were playing in Witness for the Prosecution.

You’re now touring with Murder on the Nile. Both by Agatha Christie of course, but very different shows?

Absolutely, yes. Completely different. Witness for the Prosecution is courtroom drama, and Sir Wilfrid Robarts who I played in that is a wonderful creation. Murder on the Nile is remembered mainly for the film Death on the Nilefeaturing Hercule Poirot. Poirot doesn’t feature in the theatrical version at all. It’s an amalgam of characters that’s resulted in a Church of England cleric called Canon Pennefather, who has elements of Poirot in him, which is the part I’m playing.

He’s something of a challenge for an actor because the story itself went through several incarnations so our Church of England canon has elements of a legal expert about him; levels of an accountancy expert – possibly someone who’s fiddling the funds! Also elements of Poirot about him and of course he’s a minister so there’s an awful lot to get together really! Plus he’s something of a forensics expert and he speaks French and Arabic so (laughs) it’s quite complicated!

A real Renaissance Man, then, our Canon Pennefather?

I’m afraid so! Neither fish, flesh nor good red herring, as they say. Since the part is remembered as being embodied by Hercule Poirot what I try to do is to imagine how David Suchet would do it and do exactly the opposite! (Laughs)

You get to do a bit of sleuthing in this one?

Pennefather sounds quite multi-faceted. Have you found him difficult to nail down?

Very much so. One moment I’m in accountancy mode, the next I’m in detective mode and then the next minute in forensic mode. It’s all a bit tricky. It’s also what we call in the business ‘a big learn’ – there’s an awful lot of words. I’m gradually getting it all together. The nice thing about touring is that one gets to play the part over and over again in various different venues. That’s a big advantage rather than playing it in the same theatre in the West End. I was in the West End for nine months with An Inspector Calls years ago, and to be honest the venue just got a bit boring after a while, but with this I’m in a different place every week so I can come at it afresh, as it were. It’s gelling and coming together.

Do you find you get different receptions from audiences depending on where you’re playing?

Yes, but then Agatha Christie appeals to a certain demographic. An audience in Richmond, Surrey would react differently to an audience say in Bradford in Yorkshire, and we’re playing both places. So there are different reactions. The better ones, certainly in my experience, have been in places like Dublin, Belfast, the north of England and Scotland. I think in the south of England, certainly in the Home Counties, they regard themselves as being a little bit more sophisticated and hardened theatre goers so we don’t get quite the wild receptions there as we do in the other places.

Well, we’ll be seeing you in Bromley, and we’ll be wild on your behalf!

Please do! That’s what makes it all worthwhile.

It’s the same director, Joe Harmston. Does that continuity help?

Yes, it does. A lot of the same actors as well, of course. It’s the Agatha Christie Theatre Company so we’ve been on the road with Agatha Christie plays now for the last five years or so. This is my fourth Aggie on tour, and with the same director, so it’s a huge help because one can shortcut an awful lot of the communication that goes on between actor and director in terms of an actor knows exactly what a director is capable of and vice versa. Or in some cases, not capable of (laughs)! So one gives each other the benefit of one’s experience.

Is that the benefit of working with an ensemble company?

Yes. If a new company comes together, an awful lot of time is spent just literally getting to know each other, and each other’s methods of working: one’s styles as it were; and trying to establish a house style, which is usually what happens with a large company. Because we’ve all worked together before on many occasions, one knows exactly what to expect from the other actors and one fits in to that house style. The director oversees all that, moulds it the way he wants it to go and the end result is, we hope, very watchable indeed. Our trouble is we never get enough time to rehearse thoroughly before we launch ourselves on an unsuspecting public. We only get three weeks, which is not really enough time.

A new face is Kate O’Mara. How has she been to work with, and has she fit into the company?

She’s fit in very well indeed. Kate’s an old friend. I’ve known Kate on and off for many years. I don’t think we ever did work together in television but she was always around. The BBC used to have a great big tower block rehearsal room in Acton which I think has now been demolished. Kate was always there. It was an extraordinary building anyway because you’d climb into a lift and you’d be sharing it with Vera Lynn and the Two Ronnies! Kate was a ubiquitous presence because she was always doing Triangle, or some other long-running series. I’ve been a great fan of Kate’s. I’ve worked with her before in a Noël Coward play called The Marquise for Bill Kenwright. Myself and Michael Jayston toured with Kate, and I had nothing but tremendous respect for her. She’s getting to be something of an old trooper now. She’s great to work with and an absolute joy to watch.

I’m looking forward to seeing her. You mentioned your television work there. Since we last spoke you’ve filmed the final series of ITV’s The Royal. You’d played Mr Rose for many years in that. Was it sad to end such a long-running part?

It’s been an absolute wrench. I so enjoyed playing him. It was a learning curve too; it taught me an awful lot about medical procedures and a great deal about human anatomy. Consequently one had to learn some pretty tricky anatomical terms. But I used to take him quite seriously and I’d look the symptoms up online and take them on board. It was great fun. It’s a great shame that the rug was pulled out from under us and so unceremoniously. It was a wrench for all of us as we’d been working together for seven years or so; we’d formed ourselves into a very cohesive sort of family group – and to suddenly have that taken away with no notice whatsoever was brutal, really, I felt. It took all of us a while to recover from that. Our bank balances took a while to recover from it as well, not to mention our tax bills (laughs). The way we work one has professionally speaking a very good year followed by a very bad year, followed by the tax bill for the very good year. It has its disadvantages, I’m afraid.

You’re in Murder on the Nile playing around the UK until the end of July. Do you have anything planned once it finishes the run?

No, but I’m hoping my agent will beaver away on my behalf. He certainly knows when I’ll be available, so I’m hoping by then Downton Abbey might call, or one of these new period dramas might say, ‘Denis Lill looks an awful lot like Edward VII, I think we could cast him in something like that.’ We’ll have to wait and see.

We’re coming to see the Murder on the Nile in Bromley soon, and we’d like to wish you all the very best for the rest of the run.

That’s very kind of you Greg, thank you!

Thanks for talking to us today, Denis Lill.

Greg Jamesonhttp://www.gregoryjameson.com
Book editor, with an interest in cult TV.
Previous article
Peter Watson – The Great Divide – History and Human Nature in the Old World and the New review
Next article
Michael Troughton – Patrick Troughton: The Biography of the Second Doctor Who review