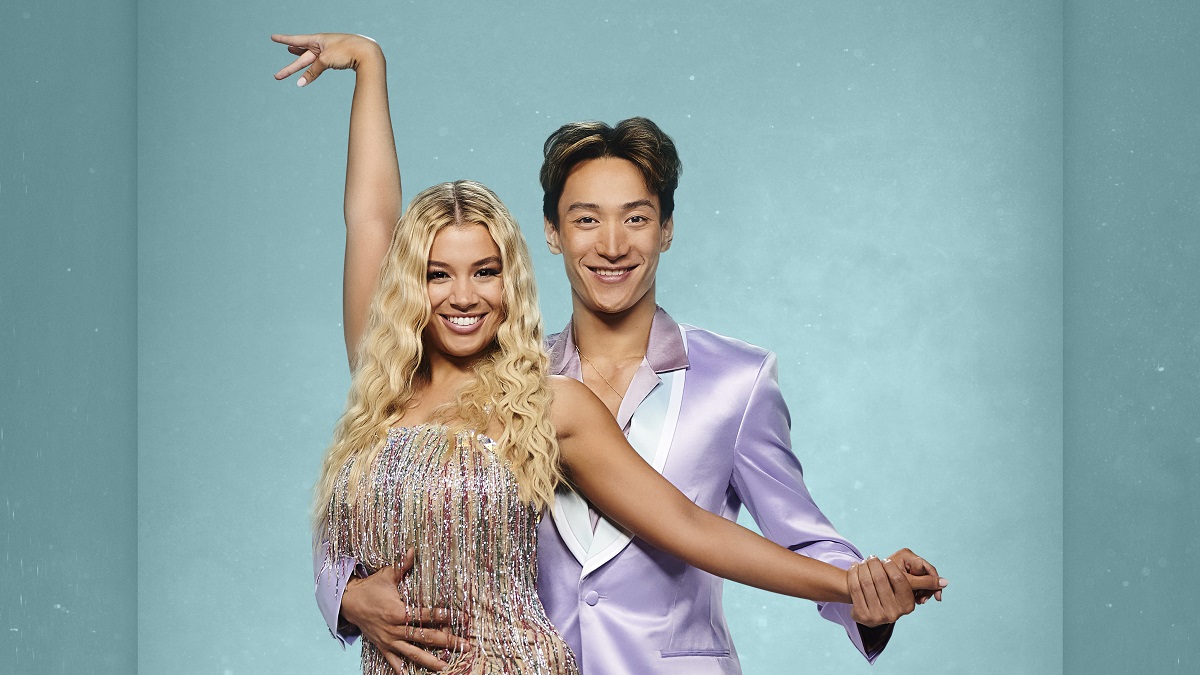 After three years away due to the Covid-19 pandemic, tonight Strictly Come Dancing was finally back in Blackpool’s iconic Tower Ballroom.

Getting to Blackpool is seen as a milestone by many contestants and the remaining eight celebrities and their professional partners were all thrilled to reach this stage of the competition.

Unfortunately Arsenal legend Tony Adams wasn’t among them, after he and his professional partner Katya Jones withdrew from the competition last week due to injury.

As usual presenters Tess Daly and Claudia Winkleman guided the contestants and viewers through all the dancefloor action, whilst judges Craig Revel Horwood, Motsi Mabuse, Anton Du Beke and head judge Shirley Ballas were on hand to share their expert views. The show also featured a stunning routine from Strictly’s professional dancers celebrating the show’s return to Blackpool.

So who would illuminate the dancefloor and whose performance would be a washout? Read on to find out more…

Hamza and Jowita dazzled the judges and audience alike with their Couple’s Choice last week, and tonight they faced the challenge of an American Smooth to Frank Sinatra’s classic ‘(Theme From) New York, New York’. In their VT Hamza struggled to master the routine and focusing on his frame and footwork, and also spoke of his excitement to be going to Blackpool.

The dance: Well that was marvellous. Hamza had great command of the dance throughout and floated across the Blackpool dance floor brilliantly, as well as handling the lifts well – they looked absolutely seamless. His moves in the side-by-side section were sharp and clean, with lovely lines in his arms and great posture. The whole thing could have been lifted from an old Hollywood movie and it was a perfect way to open the show.

The comments: Shirley said Hamza ‘shone bright than all the baubles, beads and bangles in the world’, praising his detailed footwork and lifts. Anton thought it was outstanding. Craig, however, disliked the solo jazz section, but Hamza’s smoothness and timing were ‘spectacular’. Motsi liked Hamza’s musicality and the way he used his standing leg.

After winning praise for their Rumba last week, tonight Molly and Carlos were hoping for equally positive comments about their Jive to ‘Bandstand’ by Boogie Barry Manilow. In their VT Molly spoke about the challenge of picking up the pace in this week’s dance and taking in all the information needed for the routine, whilst she and Carlos also enjoyed Blackpool’s fairground rides.

The dance: I loved the personality Molly brought to this routine, as well as her sharp footwork. She brought a great sense of lightness and fun to this dance, coping well with the tricks, and her kicks and flicks were excellent. If I had one small criticism it’s that her hands were slightly throwaway in places, but overall it was another strong performance with plenty of energy and should see her through to next week.

The comments: Anton said it was ‘tremendous’, praising Molly’s cleanness and timing as well as bringing out her personality. Craig wanted more retraction and lightness, but loved all the highlights and how Molly sold the number. Motsi thought Molly coped with the difficultly level of the routine well. Shirley felt Molly kept up with Carlos well and her footwork was good, as well as her level of detail.

Kym and Graziano wowed with their moving American Smooth last week, but tonight was a complete change of pace as they took on a Paso Doble to a mash-up of Rihanna’s ‘Only Girl (In The World)’ and ‘We Found Love’ by Calvin Harris featuring Rihanna. In their VT Kym spoke about dealing with the technical aspects of the dance, whilst she and Graziano went for fish and chips and she spoke about her memories of Blackpool as a child.

The dance: Well that was certainly dramatic! Kym had plenty of power in her solo section, whilst her co-ordination with Graziano was great and she had some really strong sharp arm movements and strong drive across the floor in hold. Loved the tricks too – particularly the leap! I would perhaps have liked it to get going more quickly and it could have done with some more exaggerated Spanish lines, plus the speed sometimes made her footwork look a little skippy. But overall it was another solid routine and it’s great seeing her grow in confidence as a dancer.

The comments: Craig thought Kym could have kept it out more and her right shoulder kept popping up in hold, but he loved the storytelling and Spanish port-de-bras. Motsi liked Kym’s control and energy but felt she tightened up in hold. Shirley loved the balance of power and feminity but wanted Kym to keep working on her posture. Anton felt it was dynamic and atmospheric but told her to work on her tension.

After finding themselves in the bottom two last week, tonight Tyler and Dianne were looking for redemption with their Salsa to a Megamix of KC & The Sunshine Band. In their VT Tyler spoke about the emotional rollercoaster of last weekend, as well as dealing with the challenge of the routine’s lifts. He and Dianne also took on the rollercoasters at Blackpool Pleasure Beach.

The dance: I thought Tyler did a great job leading the dance and overall handled the lifts well, along with the armography. He could have done with slightly more hip action for my liking though, and I’d have liked to see him extend through his arms more in the open poses. But overall this was a slick, sharp routine with great timing and energy and should hopefully be enough to see him through to next week.

The comments: Motsi thought it was ‘excellent’, highlighting Tyler’s rhythm and control. Shirley praised Tyler for handling the lifts well, along with his fluidity, but wanted him to work on his transitions. Anton said Tyler’s free work was ‘immense’ but in hold he was a bit ‘ploddy’. Craig wanted more hip rotation in the forward and back basic, but the final lift was amazing.

Ellie and Johannes found themselves back on form with last week’s Charleston, and were hoping to continue that with their American Smooth tonight, dancing to Cilla Black’s ‘You’re My World’. In their VT Ellie and Johannes spoke about their excitement at performing in Blackpool, and also paid a visit to Blackpool Illuminations ahead of their routine.

The dance: This was definitely a change of pace for Ellie, but a lovely one. I thought she had some nice flow across the floor, beautiful lines in her arms and good posture in hold too. She coped well with the lifts too (as well as rising up on the lights at the end!). There was a little bit of hesitancy at the start and it could get skippy in parts, but overall I thought she did a great job.

The comments: Shirley liked Ellie’s elegance and improvement, but wanted her to bring more soul to her performance. Anton thought it looked beautiful but Ellie’s head was too turned to the left. Craig thought Ellie’s arms need to be more expressive and the transitions in the lifts were clunky, but it was a sophisticated routine. Motsi praised the chemistry between Ellie and Johannes but said it needed more intensity.

After a mixed response to their Salsa last week, tonight Helen and Gorka aimed to get back to winning ways with their Quickstep to ‘Valerie’ by Mark Ronson featuring Amy Winehouse. In their VT Helen spoke of her enthusiasm for the dance but also struggled to control her speed, whilst also showing Gorka how to pull a pint in a Blackpool pub and speaking about her memories of visiting as a child.

The dance: This was a great Quickstep, with Helen and Gorka absolutely flying across the floor from the off. She had lovely lightness on her feet and her posture in hold has improved a lot too, as well as great sharpness and precision in the side-by-side sections. I also thought she brought a real sense of fun to the dance and loved the playful quality, especially in the finale. It feels like she’s really come into her own and I think it could be her best dance yet.

The comments: Anton thought Helen was ‘amazing’. Craig said the frame was a ‘little bit hoedown’ but the footwork was exceptional. Motsi felt it was everything you could ask fo from a Quickstep. Shirley was speechless – it was ‘absolutely superb’.

After topping the leaderboard last week, Fleur and Vito were aiming to continue their hot, hot, hot streak with their Couple’s Choice routine to a Destiny’s Child Megamix. In their VT Fleur spoke about her childhood and the importance of music when she was growing up, as well as memories of her late father. She and Vito spent some time with her family and brought them to watch her rehearse in the Tower Ballroom.

The dance: I loved the dramatic opening to this routine, as well as the sass and power Fleur brought to the dance. She had some great sharp hand movements and I really liked the references to classic Destiny’s Child and Beyoncé routines too. Great energy, slick, punchy, with fantastic co-ordination and control throughout, and an absolute showstopper of a performance. Well done!

The comments: Craig simply said, “Fab-u-lous!”. Motsi thought it was amazing and Fleur was wonderful. Shirley called it an ‘iconic’ routine and praised Fleur’s balance. Anton was impressed by Fleur’s control and said it was her best routine.

Will Mellor and Nancy Xu

After delivering a beautiful, emotional Waltz last week, tonight Will and Nancy were switching things up with their Samba to Hugh Jackman’s version of ‘I Go To Rio’. In their VT Will spoke about being pushed in training and trying not to make mistakes, whilst he also took Nancy for a trip on a Blackpool tram.

The dance: I loved Will’s energy and sense of joy he brought to his dance. He hit the musical accents really well throughout, had great hip action and an infectious sense of enthusiasm right from the off that didn’t let up. I thought the lines in his arms were great too and he handled the tricks well. Some of the footwork got a little shuffly in parts, but overall it was a fabulous way to close the show and another great performance from him.

The comments: Motsi liked Will’s body action and Samba rhythms. Shirley thought Will was a ‘well-oiled machine’. Anton said Will was ‘hypnotic’, singling out his lock step – he loved it. Craig praised the amount of hip content, calling it ‘hip-tastic’.

Strictly Come Dancing 2022 will return for the Results Show on Sunday 20th November at 7.20 PM on BBC One and BBC iPlayer.