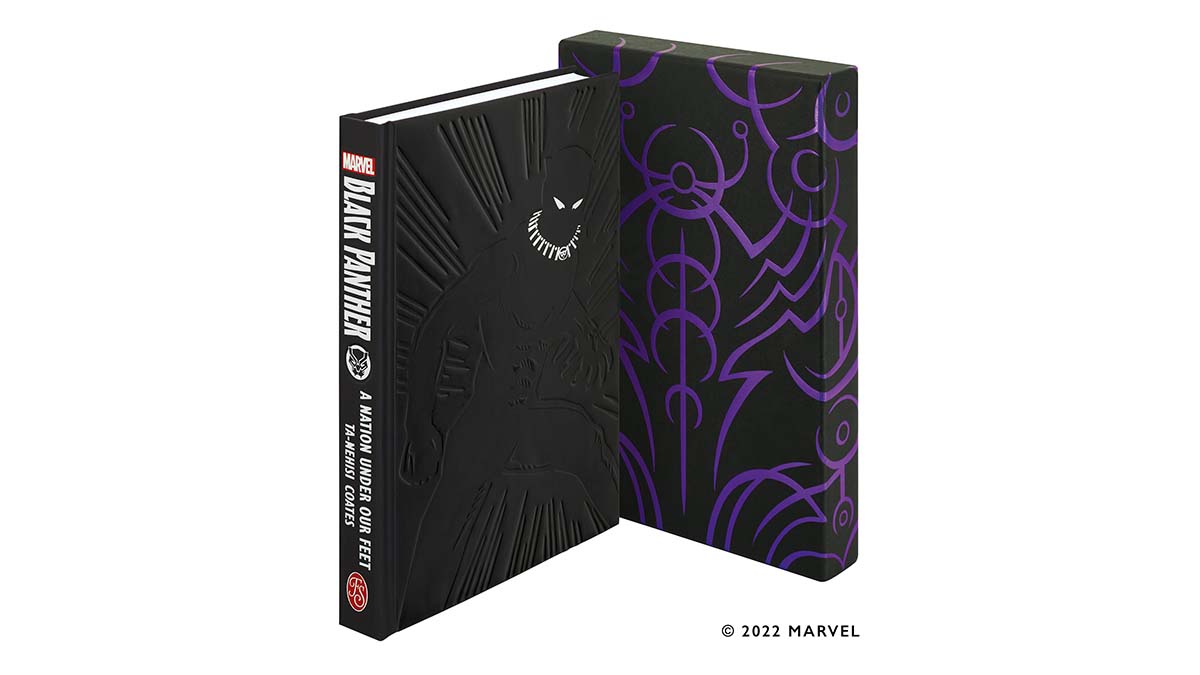 Black Panther aka T’Challa is a character that was introduced by Marvel in 1966 when he appeared in issue 52 of ‘Fantastic Four’. The King and protector of the fictional African nation Wakanda, T’Challa made his solo debut outing in 1973 and since then, a number of writers have told the character’s story. Perhaps the most notable is Ta-Nehisi Coates, who released ‘A Nation Under Our Feet’ as three instalments that spanned 12 issues in 2016. That set of comics has now been gathered together and released in a beautiful new edition by The Folio Society.

It’s unusual to find a comic book presented in the way it is here by The Folio Society, who have transformed the 12 issues into a luxury collectible that fans of Black Panther will undoubtedly want to add to their collection. Bound in Balathane Algora with an effective imprint of Black Panther on the cover, and presented in a black and purple slipcase, this edition showcases Coates’ thought-provoking and ground-breaking stories alongside the stunning original art by Brian Stelfreeze. Respected author Walter Mosley provides a scene-setting introduction that discusses his own excitement about the introduction of Black Panther to the Marvel Universe and goes on to praise the way that Coates added his unique perspective to the character.

Split into the 12 comics, ‘Black Panther’ is the kind of title that you can dip into and savour as each instalment is a fairly quick read. Perhaps what is most striking about the story created by Coates is just how relevant it is to today’s society, particularly when you look at the political unrest that seems to be prevalent across the globe. In ‘Black Panther: A Nation Under Our Feet’, Coates explores how T’Challa attempts to keep Wakanda together as the people lose faith in Black Panther and rebels attempt to overthrow him.

Across the 12 issues, T’Challa comes up against The People, a terrorist organisation determined to cause civil unrest, and the reader gets to know more about his family as he turns to Ramonda, the Queen Mother of Wakanda, for her sage advice and strong support as he grapples with his own feelings of not being good enough. The theme of family is central to the story with T’Challa having lost his sister Shuri, who sacrificed herself in battle for the greater good.

Coates gets under the skin of T’Challa, presenting him as a man with extraordinary power and influence, while showing the toll that has when your decisions impact the lives of so many others. This is a story that’s as much about an internal battle as it is an external one, and it’s a deep dive into a character who has changed the very fabric of the Marvel world.

‘Black Panther: A Nation Under Our Feet’ is an absolute must-have for Marvel fans. Black Panther is undoubtedly one of the most important characters in the comic book universe, and his story in the hands of Coates offers surprising depth that you wouldn’t necessarily expect from a comic book. This edition from The Folio Society is a celebration of the iconic character, arriving at the time that ‘Wakanda Forever’, the much-anticipated sequel to 2018’s ‘Black Panther’ arrives in cinemas.

In this article:Black Panther, Marvel, Ta-Neshi Coates, The Folio Society