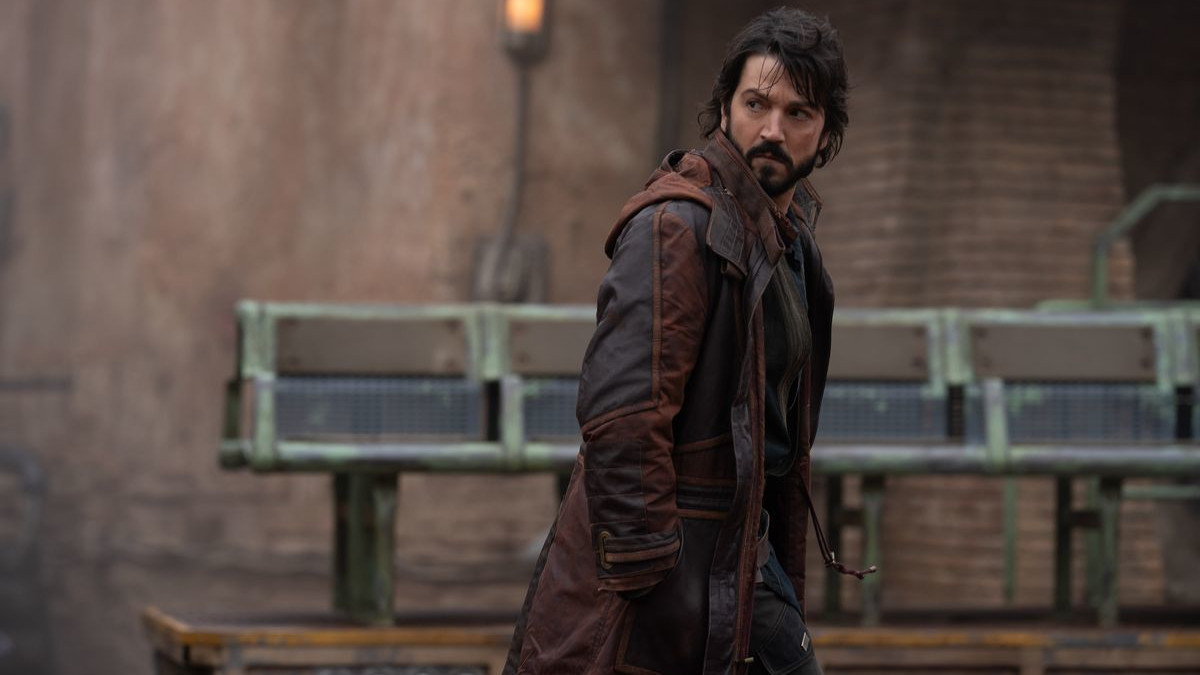 After the launch of Disney+ it was clear that we would be getting lots of new Star Wars content. TV series based around Boba Fett and Obi-Wan Kenobi were obvious choices but easily the best so far has been The Mandalorian. Despite loving the Star Wars: A New Hope prequel movie, Rogue One, I was surprised and intrigued to hear a new series was being created based around the character of Cassian Andor (Diego Luna).

Andor is created by Tony Gilroy (Bourne trilogy, Rogue One) and set some five years before the events of Rogue One. Hearing it described as a “spy thriller” it’s clear we’re to expect something a bit different than we’re used to from Star Wars. Here the main focus is on Cassian Andor with Diego Luna reprising the role. The series aims to give us the backstory of Cassian and let us see the sequence of events that turned him into a rebel hero.

So far I’ve been able to watch the first four episodes of Andor and I’ve aimed to keep this review as spoiler-free as possible. Obviously it’s hard to talk about the series without giving some things away so if you’re keen to avoid anything being spoiled I suggest you stop reading now until you’ve seen it for yourself.

For Andor, Disney have chosen to release the first three episodes for the premiere and having watched them it’s clear why. Andor takes a little effort to get into as pretty much everything is new. The first two episodes are maybe a little slow and I found it wasn’t until episode three that I really found myself hooked. Like the other Star Wars TV series on Disney+ episodes tend to run for around 40 minutes.

In the first episode we find Cassian trying to track down a sibling. It’s not immediately clear why he’s looking for them but flashback sequences to when he was a child eventually explain. After a lead turns into a dead end he finds himself in a spot of trouble with the local authorities. One of their officers Syril Karn (Kyle Soller) leads the search for Cassian which forces him to try and find a way to flee.

Fortunately he already has the makings of a backup plan as he’s in possession of a piece of stolen Empire tech. It’s potentially worth a small fortune so he speaks to his friend Bix Caleen (Adria Arjona) who might be able to help. While Cassian tries to lay low, Bix sets up a meeting with a mystery buyer named Luthen Rael (Stellan Skarsgård). This meeting proves to be very important leading Cassian to other like-minded individuals.

In the first episodes we also meet Andor’s mother Maarva played by the wonderful Fiona Shaw (Killing Eve) who is brilliant here. Sadly Rogue One’s K-2SO doesn’t feature but there a new fantastic droid owned by the Andor family called B2EMO. It has has a bit of a stutter and is full of personality.

Later episodes introduce us to a character familiar with Star Wars fans – Mon Mothma with Genevieve O’Reilly reprising the role. Forest Whitaker also returns to his role as Saw Gerrera who we met in Rogue One.

Throughout the series we get to see the Empire’s perspective on events and an early favourite character for me is an Imperial officer played by Anton Lesser (Game of Thrones). There’s also a female Imperial officer called Dedra Meero played by Denise Gough who looks like she will have a big part to play.

Despite being quite different Andor does still feel very Star Wars. There’s new and familiar planets to see and the usual mix of alien species and creatures. As Andor sits between the prequel trilogy and Rogue One it makes sense that the tech is somewhere between the two. I particularly love seeing the technology that is a mash-up of old and new. Star Wars fans will have a great time analysing everything.

Something else I loved about Andor is the locations feel more real than some of the recent efforts. There’s no denying that the Mandalorian looks fantastic but the tech used there isn’t suitable for everything. Known as ‘the Volume’ the tech is a kind of digital replacement for green screen. In Andor they opted not to use this tech, relying more on filming in real locations with practical effects and from what I’ve seen so far it was a smart decision.

From what I’ve seen so far the script is well written and the acting is top-notch. I didn’t know we needed a prequel set around Cassian Andor but I’m glad we’ve got one. He’s fast becoming another of my favourite Star Wars characters and Diego Luna has done a great job with him.

Andor is off to a very promising start and I can’t wait to see where it goes next. It’s a bit different for Star Wars but that’s a good thing. Expect plenty of danger, deception and intriguing characters. If you’re not sure at first that it’s for you then I’d urge you to stick with it until the end of episode three before you decide. I think it’s also worth pointing out that Andor has already been renewed for a second season so there’s plenty more to come.

The first three episodes of Andor will launch on Disney+ on 21st September. The remaining nine episodes will air weekly starting from 28st September.