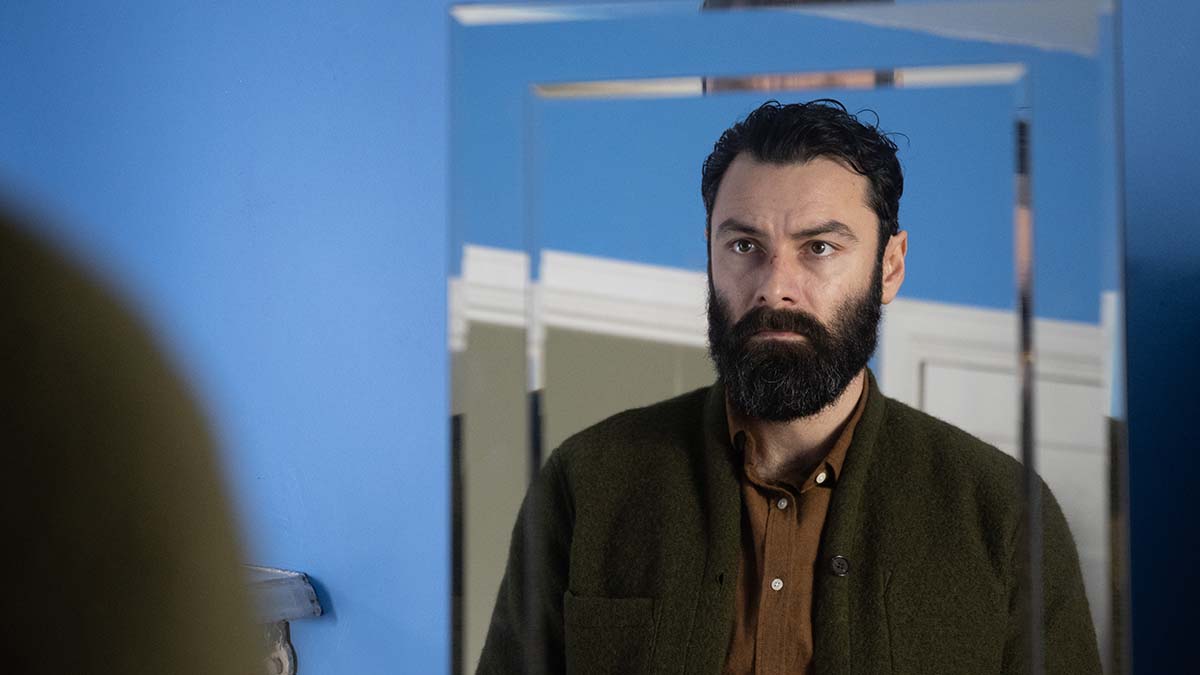 Joe (Aidan Turner) continued to look for answers and found out some very surprising information in the penultimate episode of ‘The Suspect’.

Joe confronted Jack at the opening of tonight’s episode, accusing him of being the person who murdered Catherine (Tara Lee). When Jack told Joe he was wrong, Joe revealed that the police had found her journal and he showed him the photos of Julianne (Camilla Beeput) he’d found in his apartment. Jack revealed he’d never fallen out of love with Julianne and he admitted his affair with Catherine, but insisted that it ended two years earlier. Following those revelations, Jack was asked to leave.

Jack asked Julianne if he could stay in the house and she told him only if he told the police that Cara (Bronagh Waugh) was his alibi. When he tried to put it off until the next day, Julianne insisted so Joe went to see Cara and found her dead. Taking her car keys, Joe made a quick getaway before Ruiz (Shaun Parkes) and Devi (Anjli Mohindra) showed up, and were told that a man matching Joe’s description was seen fleeing the scene.

The next day Jack went to speak to Ruiz and Devi, and told them that the JO Catherine wrote about was him and not Joe. He told them he only found out about the journal from Joe the previous night, which led the police to believe that he was helping Joe out rather than telling the truth. Ruiz and Devi took a search team to Joe’s house and questioned Julianne, telling her that Cara was found strangled the night before. Julianne told them that Cara was Joe’s alibi and she knows he wouldn’t have killed anyone.

Joe meanwhile was visiting his father. As Joe ate, his father noticed his hand’s shaking and asked if he had Parkinson’s. Joe confirmed he did and told him that he’d known for a couple of weeks. Breaking down, Joe admitted he was in a lot of trouble and his father said he knows he couldn’t have killed anyone.

Later Joe walked in on his father and step-mother talking about him. He revealed Julianne was pregnant then took a walk with his step-mother, who told Joe that his father didn’t blame him for not getting his mother out of the house fire that killed her. Joe noticed his step-mother holding a whale figure, the same one he’d had from Bobby (Bobby Schofield), and she told him Bobby sent it to her. She revealed she’d met Bobby a year earlier and he’d encouraged her to learn Spanish. We then saw Julianne teaching a Spanish class and who was one of her students? Bobby!

Putting the pieces together, Joe found out that Bobby had stayed at his parents’ home, which is where he’d found out personal information about him. Joe’s father admitted that he’d told Bobby about Catherine.

After the class Julianne was about to call Joe’s father but was interrupted in her car by Bobby who asked her for a lift and she agreed. As they talked, Bobby started talking nastily about his dying mother and then intimidated Julianne. Seeing DJ (Tom McKay) at his van, Julianne honked the horn of the car and he came to help her, sending Bobby on his way. Once inside the house, Julianne called Joe and told him what happened. Joe told her to pick up their daughter and Julianne warned him that the police were on their way. Joe made a quick escape out of the back of the house and headed for the woods. His father met him a short distance away in his car and picked him up.

Ruiz and Devi’s next stop was to see Bobby, who pretended he was sorry about what happened with Julianne. They asked him about his name and he said he changed it to become someone else. The news of Bobby’s interaction with Julianne surprised the detectives and Bobby claimed that Joe was the one who encouraged him to take Spanish classes with his wife. Ruiz asked why Bobby had visited Joe’s parents and he told a story about how they took him in after meeting him, and referred him to Joe for help. When asked where he was the day before, Bobby said he was at the hostel he was staying in.

Joe’s father gave him his car to get to Liverpool, where Joe was planning to track down Bobby’s mother, who the youngster had told Julianne he was going to do awful things to. Arriving at the hospital, Joe talked his way into seeing Bridget (Katy Carmichael) and after an awkward exchange, Joe started asking her about Bobby. Talking around in circles, Joe asked Bridget if she’d got Bobby to lie about being abused by his father and she got agitated so Joe was asked to leave.

Joe called Fenwick (Sian Clifford) and told her he wouldn’t make her wedding, but asked if she could help him find Rupert Erskine, the man that Bobby had lied to. Once the call ended, Joe removed the sim card from his phone and dropped it into a gutter, before paying a visit to Melinda (Angela Griffin) asking to see Bobby’s file again.

Ruiz and Devi visited Bridget and she painted a very different picture of how her conversation with Joe went. They also spoke to the nurse who threw Joe out to try and find out what Joe was doing there. Ruiz suspected that Joe was targeting Bobby’s family and Devi informed him that they’ve tapped the call Joe made to Fenwick.

As Joe watched his interview with a young Bobby, Melinda discovered that Bobby had asked to see his file two years earlier, meaning he could have taken documents out of it. Joe started to theorise that Bobby had taken everyone’s names from his file and was targeting them all. Melinda then discovered that it was Joe that signed Bobby’s assessment form, and realised Bobby was getting revenge blaming Joe for the death of his father.

Ruiz and Devi turned up at Rupert Erskine’s house and found him slumped over his desk dead with his hands tied and his mouth taped up.

Joe spoke to Bobby’s teacher again and discovered that the teacher who called social services lost her parents in a house fire. Was Bobby responsible?

Read our ‘The Suspect’ Episode 3 recap

‘The Suspect’ concludes at 9pm Monday on ITV.