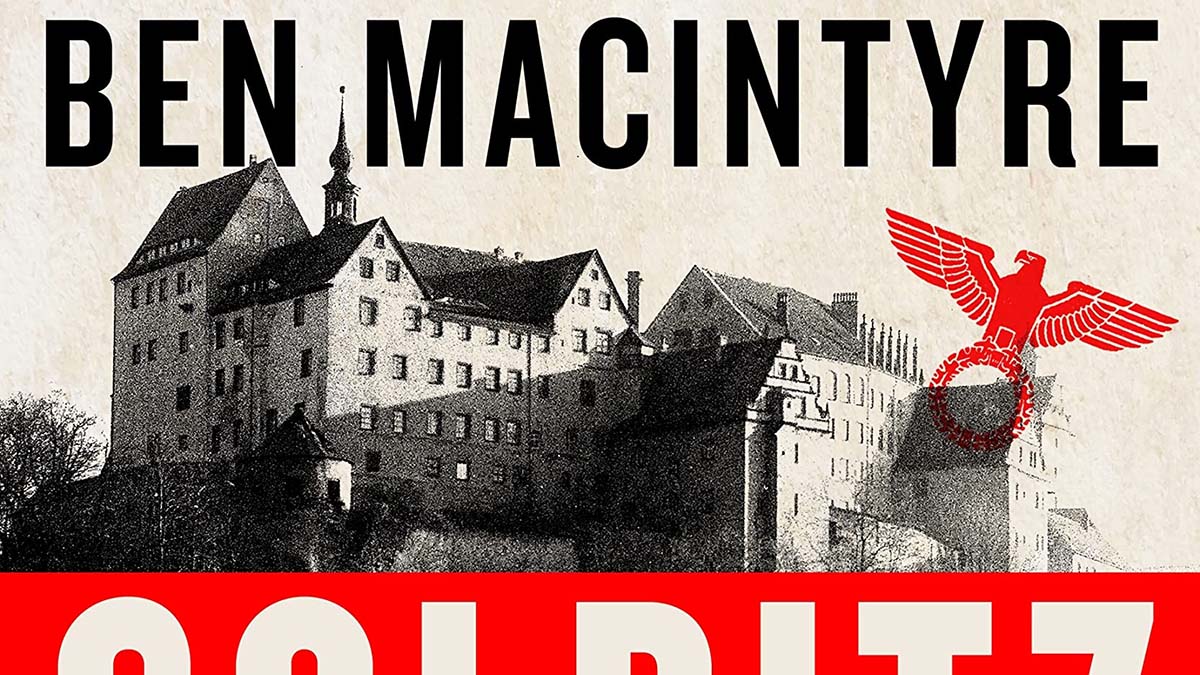 Ben Macintyre, the author of many books on historical espionage, returns with ‘Colditz: Prisoners of the Castle’. This title examines the German castle’s infamous use as a prisoner-of-war camp for exceptional Allied officers during the Second World War. ‘Colditz’ is a highly engaging account of the community of men housed within the castle’s cold and austere walls. The narrative incorporates the social structures of the time such as the rigid British class system and the national animosities. He also encapsulates how events outside the prison walls, as conflict drew ever closer, impacted upon the prisoners’ daily lives. For example, there is French anti-Semitism that leads to Jewish prisoners becoming ghettoised, much to the chagrin of the British who invite Jewish inmates to dine with them, and one of the characters we meet is Dr Birendra Nath Mazumdar, an Indian Captain unjustly suspected of being a German spy, who went on hunger strike in protest at his treatment.

‘Colditz’ is a fascinating book from start to finish for anyone with a keen interest in Twentieth Century history and the defining conflict that shaped the world for decades afterwards. It is rich with information but never dour or too academic. Macintyre’s lightness of touch doesn’t come at the expense of details, but rather he gives listeners just enough information to satisfy and enlighten them. Surprisingly, perhaps, the book is frequently funny. The author recounts how the prisoners’ favourite hobby was ‘goon-baiting’, which meant winding up, demoralising or playing mind games with the long-suffering German guards. This included staring at their trouser flies to make them self-conscious. New sports were invented, at which the British frequently lost, but which nevertheless provided an excuse for violence and a much-needed release of pent-up aggression. Plays were frequently staged, with men playing all of the female parts, though this excuse for high camp was invariably as cover for noises beneath the ground from the surreptitious digging of tunnels.

The author sheds light on the famous names who were at one time or another housed in Colditz Castle, though he hones in on a select few. Airey Neave is one of the fascinating examples. This British officer made two escape attempts. The first was a ridiculous failure and the second valiantly succeeded. Macintyre provides vivid descriptions of his feats of escapology, and his later exploits working for MI9 (these sections will thrill espionage enthusiasts). Neave would, of course, later be the Tory grandee who spotted the potential in Margaret Thatcher and helped her on her way to defining British politics throughout the 1980s (an accomplishment he would not live to see, as he was murdered by the IRA in 1979 only a few months before Mrs Thatcher became Prime Minister). Then there’s Douglas Bader, the celebrated disabled aircraft pilot who lost both of his legs (one above and one below the knee) in a flying accident when he was only twenty-one. Bader is one of the most memorable characters in a book that is saturated with fascinating people. The author does an excellent job of providing fair-minded balance, with the time-honoured historian’s tradition (not a given in these unpleasantly censorious times) of refusing to judge historical figures by contemporary standards. Bader, Macintyre amusingly relates, was a bastard, an inspiration and a hero, all at the same time. Although ‘Colditz’ is necessarily an overwhelmingly male-dominated story, Macintyre includes the memorable visit of glamorous American journalist Lee Carson to the castle as another reminder of the outside world.

The sense that the author has a genuine reverence for his subjects, whilst recognising their complexities as fault-riddled human beings, is what makes ‘Colditz’ such an affectionate as well as informative account. Macintyre never loses sight of the fact that every one of the men incarcerated within the castle walls were human beings. This means that he covers angles such as the psychological toll imprisonment took on some of the inmates, and the less sympathetic attitudes of the era towards mental ill-health. The fate of Francis “Errol” Flinn is perhaps the book’s most sensitive and moving component. Macintyre’s sense of fair play and balance extends to giving the other side a voice, too. This is especially the case with Reinhold Eggers, the German chief of security. Despite his position of authority, Eggers is a surprisingly sympathetic character. A clever former head-teacher, he is brilliant at his job of foiling escape attempts, but, as Macintyre reveals, he never loses his decency or humanity, even during the latter stages of a brutal and vicious war. Experiencing Macintyre’s ‘Colditz’ has piqued my interest in reading Eggers’ autobiographical account of his time there, even though Macintyre points out his many deliberate omissions or evasions in telling the full story.

For those who enjoy the tales of escape and derring-do, Macintyre packs plenty of dramatic instances into ‘Colditz’. These stories, incorporating tunnelling, the building of light aircraft out of odds and ends, cunning disguises and the psychological exploitation of the German propensity to show deference to authority, are testament to the ingenuity and indefatigable spirit of many supremely gifted inmates. Their escape attempts, even though the vast majority failed, became the stuff of legend, and it’s right that Macintyre allows plenty of focus upon that in his book.

Over the course of the hours spent listening to Macintyre bring together his narrative, listeners feel that they get to know the real-life characters who populate the pages. Macintyre’s research incorporates an extended “walk down” in the final chapters, as we learn of the ultimate fates of the key players. This is a rich and satisfying way to conclude the account, especially since even those who lived to a ripe old age are no longer with us. Considering that a life of confinement is, by its very nature, repetitive, and recurring failures to achieve an objective (namely escaping) are demoralising, it may be anticipated that such sentiments seep into the pages. The author, by and large, avoids any sense of retreading familiar ground or periods of stagnation in his narrative. If threads are returned to, it is only to provide an update. By structuring his account chronologically and matching it to military events outside of the castle walls, the author ensures that the book has a feeling of relentless narrative progression.

Audiobooks read by authors can sometimes misfire. Writers tend to be more interesting on the page, and too shy to bring their work to life themselves. Often, wiser authors leave this job to actors. Ben Macintyre is an exception to this general rule. His reading voice is pleasant on the ear, and possesses the requisite warmth to be instantly engaging. He is also authoritative where he needs to be. Best of all, he speaks clearly and articulately, so that thirteen hours in his company is a real pleasure, like dipping into an enjoyable conversation. If you’re interested in the Second World War, espionage and Twentieth Century world history, or if you’re looking more specifically for an accessible and highly entertaining account of the most famous prisoner-of-war camp of World War Two, ‘Colditz: Prisoners of the Castle’ is an excellent book to add to your collection. ‘Colditz’ is sure to delight, divert and enlighten listeners or readers of any age.

In this article:Audiobook, Ben Macintyre, Colditz Prisoners of the Castle, Penguin Books