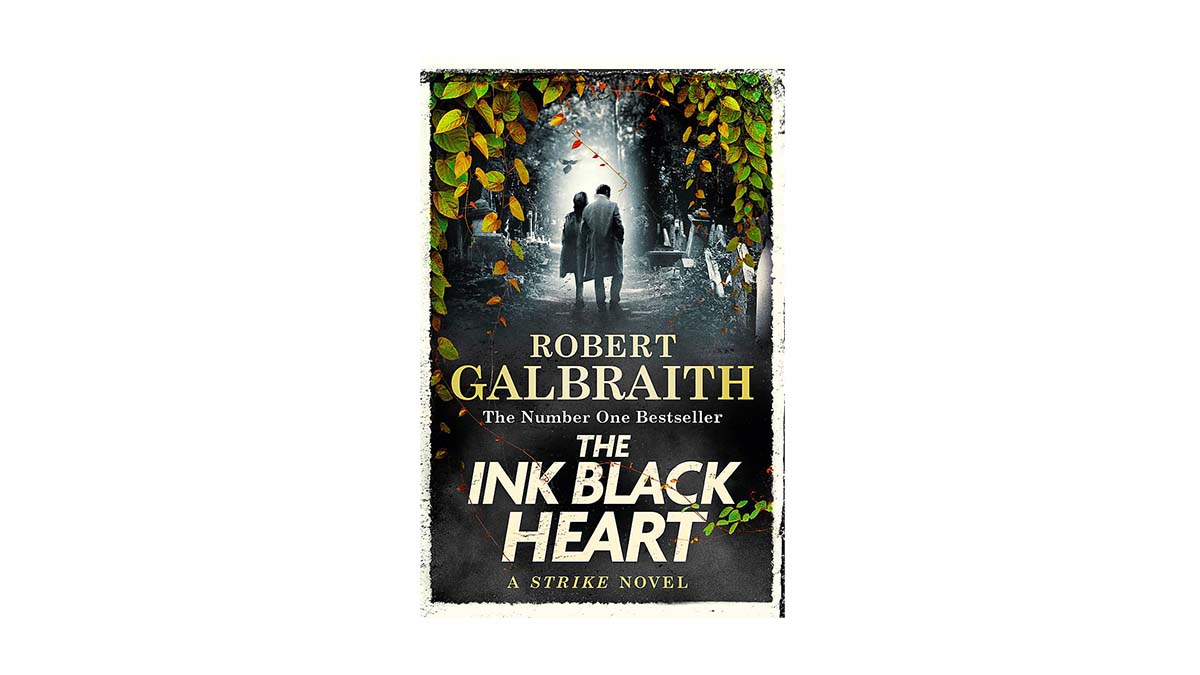 Following the phenomenal success of the ‘Harry Potter’ series of books, J.K. Rowling made her first foray into adult fiction with 2012’s ‘The Casual Vacancy’. Less than a year after the release, Robert Galbraith released his debut novel ‘The Cuckoo’s Calling’, which was the start of the now best-selling Cormoran Strike. What do these two facts have to do with one another? Well, Galbraith was outed as J.K. Rowling writing under a pen name shortly after the book’s release and the series shot into the best-sellers list. Since 2013, Rowling has been steadily releasing new instalments under the Galbraith name, and the first four books have been turned into a television series by the BBC.

Just short of two years from the fifth ‘Strike Book’, ‘Troubled Blood’, Galbraith is back with sixth instalment ‘The Ink Black Heart’. Picking up shortly after the events of the previous book, readers are thrown back into the world of Cormoran Strike and his detective partner Robin Ellacott as they find themselves tangled up in the murder of Edie Ledwell, the co-creator of a YouTube cartoon called ‘The Ink Black Heart’. After begging Robin to help her find out the real identity of Anomie, an Internet troll that has waged a campaign of harassment against her, Edie is found dead in Highgate Cemetery. It’s not long before Cormoran and Robin are hired to discover who Anomie is and find out if he or she is behind Edie’s brutal murder.

Anyone who knows anything about Rowling will know that Internet trolling is something she’s had plenty of experience of. Having been the target of a hate campaign after voicing her views, Rowling regularly has to deal with death threats and vile tweets sent in her direction. She’s poured all of her experience into ‘The Ink Black Heart’ and readers find themselves scouring through tweets, social media posts, blogs and online chats between the moderators of ‘Drek’s Game’, a game based on ‘The Ink Black Heart’ that seems to be at the centre of Edie’s horrendous ordeal.

Clocking in at 1,012 pages, ‘The Ink Black Heart’ is a hefty tome but surprisingly the book never really sags. As Galbraith, Rowling has mastered an engaging writing style that makes the books impossible to put down. I actually devoured the book in a matter of days and when I wasn’t reading it, I couldn’t wait to pick it up again and continue the story. A real page-turner, ‘The Ink Black Heart’ is an expertly crafted mystery with a colourful cast of supporting characters, filled with clues for readers to try and decipher. As Cormoran and Robin use their expertise to try and unmask Anomie, they are pulled into the crosshairs of an alt-right group known as The Halvening, putting their lives in danger. Is the organisation related to Anomie and Edie Ledwell? Is it all a coincidence. Of course, I can’t reveal anything as that would be too huge a spoiler.

Part of the appeal of the ‘Strike’ novels, aside from the murder case at the centre, is the development of the relationship between Cormoran and Robin. For the last five books, the two co-workers turned business partners have been battling with their burgeoning feelings for one another, frightened of taking the next step in case it goes wrong and ruins everything. In ‘The Ink Black Heart’, Robin is divorced and happily single, with a few offers of dates, while Cormoran is on the verge of a new relationship with a woman that has unfortunate ties to his meddlesome ex Charlotte Campbell, who of course pops her head up again in a bid to derail Cormoran’s life.

Outside of the relationship of those two central characters, readers get to find out more about the other people that work at the agency. Private detective Barclay is back as is gravelly-voiced secretary Pat, who still isn’t the biggest fan of Cormoran. There are some new characters introduced too, further fleshing out the ‘Strike’ world as Cormoran and Robin expand the agency to deal with the influx of new clients heading their way after solving a number of high-profile cases.

Some critics may say that ‘The Ink Black Heart’ is too long and could have been chopped down, but for me it’s the level of detail Rowling as Galbraith puts in the books that makes me a fan. I feel like we really know Cormoran and Robin six books in and I feel invested in these characters, as I did when I read Rowling’s ‘Harry Potter’ series. When they’re in danger, I’m hanging onto the book for dear life desperate for assurance they’ll be fine, and when they seem to be moving towards a romantic entanglement, I find myself willing them to ignore their reservations and throw caution to the wind.

‘The Ink Black Heart’ is another strong entry in the ‘Strike’ series. It kept me guessing to the end with plenty of twists and turns, and I found the resolution to be a satisfactory one. The stage is most definitely set for book seven, which I’m assuming should land somewhere between 2023 and 2024, and I’m already counting down the days. Rowling has struck gold a second time as Robert Galbraith, and she’s proving herself to be an incredibly effective writer of crime thrillers.