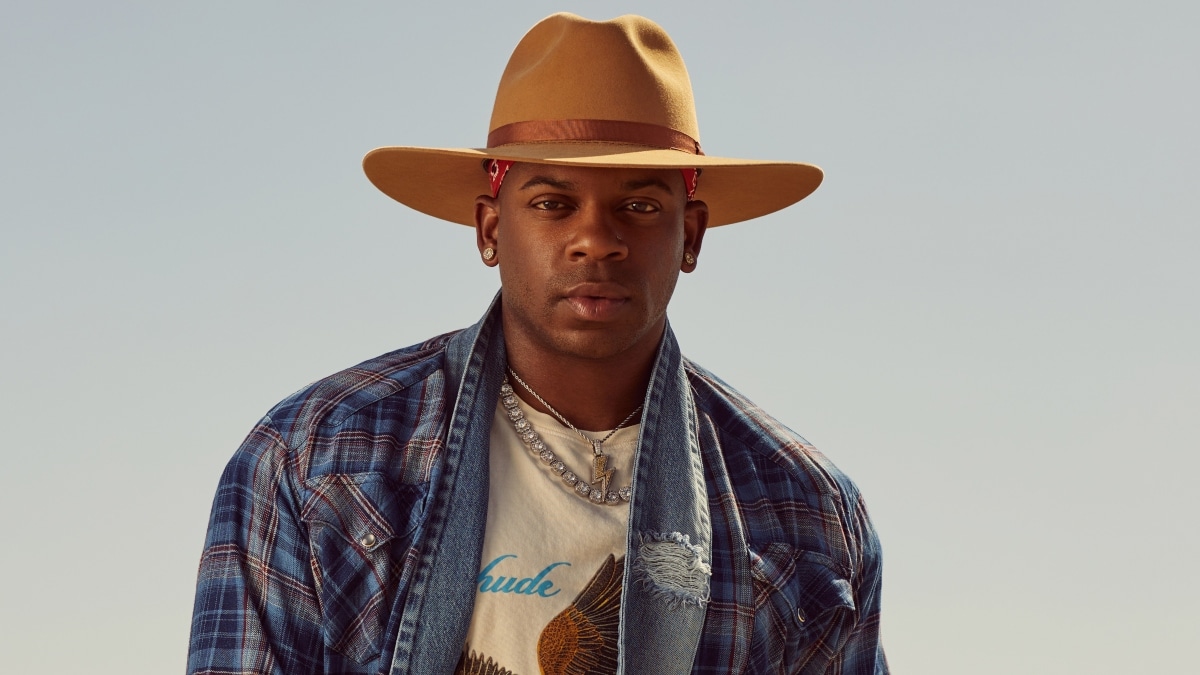 Jimmie Allen burst onto the country scene back in 2018 with his hit single ‘Best Shot’ which topped the Billboard country charts – along with follow-up ‘Make Me Want To’ from his debut album Mercury Lane. Since then he’s been winning over fans on both sides of the Atlantic, with appearances at C2C: Country to Country and Country Music Week endearing him to UK audiences and prominent American shows with the likes of Brad Paisley.

The release of sophomore project, ‘Bette James’ saw a multitude of duets with the likes of Tim McGraw, Nelly, Noah Cyrus and Pitbull to name but a few and in November of 2021 Allen’s three years of hard work culminated in him winning the CMA ‘New Artist of the Year’ award. The next chapter of his career starts here and now with third album, ‘Tulip Drive’.

Similar to his previous projects, ‘Tulip Drive’ has a personal meaning to Allen, it being the name of the street his late grandmother grew up on. The album also shares a genealogy with ‘Bette James’, it being jam-packed with songs, sounds and diverse styles, which is where both albums differ from Allen’s debut album, ‘Mercury Lane’. There are 17 songs on ‘Tulip Drive’ and Allen has taken an editorial decision to fill the album with songs of differing styles and genres. The positive side to this is that the listener is bound to find a number of songs that they love because Allen is a skilled songwriter and master-craftsmen of modern Country music. He also excels at R&B, Soul, Hip-Hop and Latino collaborations with the likes CeeLo Green, T-Pain, Jennifer Lopez and Kaite Ohh too. However, the chances that the same listener will enjoy this whole body of songs will be quite remote as most people, in my experience, generally listen within the genre confines of a limited number of styles.

‘Mercury Lane’ had a unifying narrative and style that tied that project together but on his next two albums, Allen has taken the decision to expand his style, widen his repertoire and fill those albums with differing styles, sometimes going for quantity over quality, although not often because Jimmie Allen is one of the most promising and skilful artists currently pushing the boundaries of Country music and the expectations of its fans into a bright new future.

So, dive into ‘Tulip Drive’ and you are bound to find something you like. Current single and future summer number one radio hit, ‘Down Home’ reeks of class and raw, personal honesty. This, to me, is where Allen excels. A tribute to his late father, ‘Down Home’ has all the hallmarks of an honest-to-goodness Country classic. Personal lyrics that pertain to Allen’s own life experience mixed with a sentiment that is raw rather than mawkish and the type of chorus that lodges in your head for days and doesn’t let go. Similar power and heft can be found on ‘Habits and Hearts’, which is a piano based ballad about addiction, love and change. There’s a terrific bridge in which Allen’s vocals are at their best on ‘Tulip Drive’ and superb lyrics that speak directly to the human condition. ‘Undo’ also has a delightful lilting melody and a wonderful chorus based around the idea that ‘love is the hardest thing to undo.’ It’s a soulful singalong with real heart, something Allen has a real USP for.

The other side to Jimmie Allen that really works for me in terms of modern Country music is that ‘Freedom Was a Highway’ side. 80s leaning guitar production sounds and uplifting melodies are a real good look on Jimmie Allen and ‘Tulip Drive’ is not without a couple of those moments. ‘Kissin You’ could be the sequel to the aforementioned ‘……Highway’ with its vibe and guitar sound and a chorus made for radio airwaves and giant arenas whilst ‘Wouldn’t Feel Like Summer’ screams Rascal Flatts and a place somewhere on the ‘Stranger Things’ season 4 soundtrack! You won’t fail to smile listening to this excellent track and within moments you’ll be planning to road trip somewhere with your hand out the window of the car. Finally, ‘Keep ‘Em Coming’ has all the hallmarks of a bona-fide Jimmie Allen classic. A quieter verse gives way to an explosive chorus with hints of the 80s, more Rascal Flatts vibes and even a pinch of ‘Like a Virgin’ era Madonna programming thrown into the mix at the same time too!

‘Tulip Drive’ also contains a couple of other highlights along the way too. ‘You Won’t Be Alone’ closes down the album with a sample of Allen’s son saying ‘I love you Daddy’ before becoming something deeply personal as Allen sings ‘I can’t promise that the world won’t hurt somewhere down the line but you won’t be alone,’ to him. There’s a meaning and authenticity here that speaks directly to Allen’s life situation that will be relatable to many other people at similar stages of life. It will make this track the favourite one on the album for many of his fans. It also has a great guitar solo for anyone looking for that sort of thing too!

Allen’s duet with J-Lo on the track ‘On My Way’ is also a great singalong. Ported across from Lopez’s recent film, ‘Marry Me’, with Jimmie added in on vocals, it has a slightly different production sound to the original and it builds to a great climax in the final section built around the ‘on my way to you’ mantra which is intensely satisfying.

Where ‘Tulip Drive’ loses some of its impetus and cohesiveness is also the place where I suspect Allen wants it to be at its most diverse and genre-free. ‘Pesos’ could be Ricky Martin or Enrique Iglesias in another guise whilst songs like ‘Love in the Living Room’ and ‘Broken Hearted’ tread a similar, slick R&B meets Latino kind of path that don’t really relate to or share a heritage with some of the other songs on the album. Some people will see this as a strength: this diversity and Allen’s ability to cross genres with ease and style and he is well within his rights to want to make those decisions, I just think he is at his best on the more honest, real and authentically grounded songs that he has in his armoury. If Marvin Gaye was still making music in 2022 then he would be making songs like ‘What I’m Talkin’ About’ but I’m not sure you can be Marvin Gaye, Gary LeVox and Ricky Martin all on the same album – or maybe you can and it’s just my narrow-mindedness and in-the-box genre restrictions that prevent me from being able to see that? Who knows!

What is clear is that there is something for everyone to enjoy on ‘Tulip Drive’. Jimmie Allen is a skilled songwriter and slick, passionate singer who has an amazing knack for melody and an ability to bring personal stories to life and make them very relatable. He also has drive and a desire not to be confined to genre expectations or trapped within the ‘rules’ of Country music. This could be his greatest strength or something that is unsustainable going forward in his recording career. ‘Tulip Drive’ has some fantastic songs on it, some absolute classics destined to win over the hearts and minds of radio listeners and music fans everywhere – it is a great ‘collection’ of songs that reflect where Jimmie Allen is in his recording career right now.

Somewhere within Jimmie Allen, though, there is a place where a great ‘collection’ of songs will give way to a great ‘album’, a unified piece of work tied together by a binding narrative that hangs together and takes the listener on a journey from beginning to end in the way that Rascal Flatts did on ‘Me and My Gang,’ Eric Church does on his albums and Little Big Town did on ‘Painkiller. Some listeners and musicians don’t care about that perception of the ‘album’ as a unifying concept, they just want content and song after song but mark my words, I’ll put the receipt down now, somewhere in his career, whether it’s on album number four, five, six or seven, Jimmie Allen will produce a CMA award winning ‘Album of the Year’ and I’ll be there to cheer him on every step of the way.