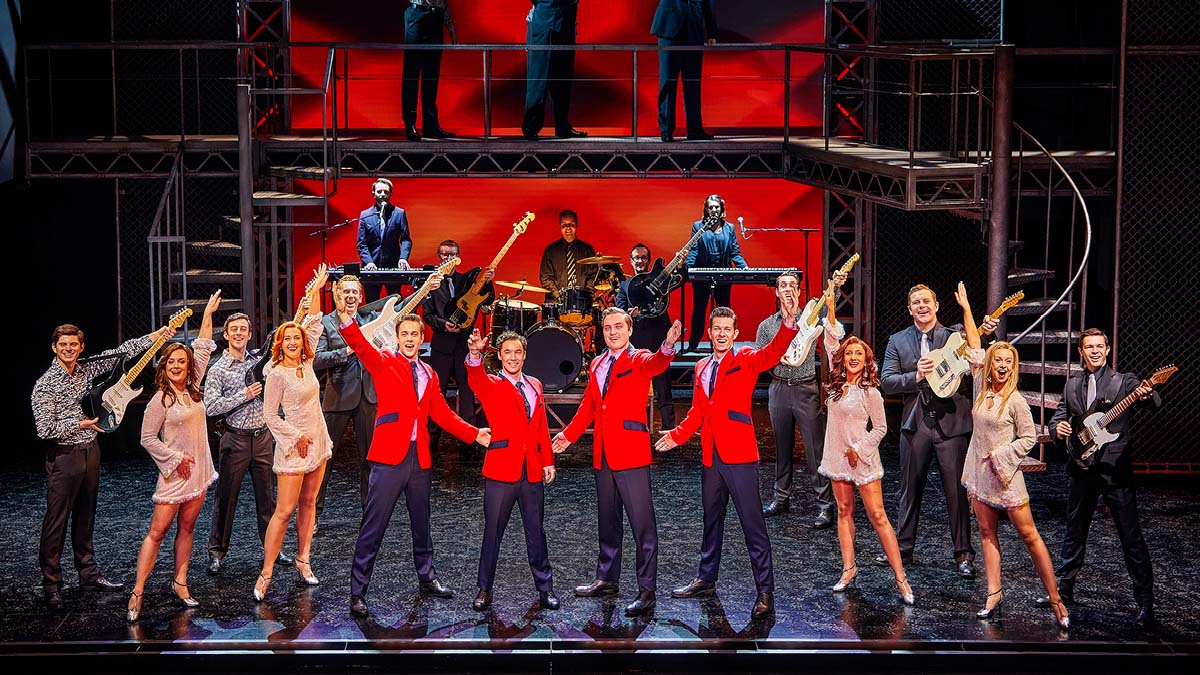 Playing this week at the Churchill Theatre, Bromley, is hit Broadway and West End musical sensation ‘Jersey Boys’. It tells the rollercoaster story of legends Frankie Valli and the Four Seasons, from their humble New Jersey origins to international megastardom following a string of immortal rock and roll hits.

Every good jukebox musical should celebrate the best-known songs whilst bringing an audience on board with an emotionally-engaging story. ‘Jersey Boys’ succeeds on this score, but especially in showcasing the songs that are now part of our shared cultural heritage.

Excellent design by Klara Zieglerova evocatively recreates the industrial landscapes of New Jersey, and in his addresses to the audience, guitarist Tommy DeVito (Dalton Wood) explains why and how people who grow up there aspire to leave. Young men forming a rock band against the backdrop of mean streets and mob rule is inevitably a scenario that results more in failure than success. The humble origins of the quartet who would go on to become the Four Seasons offer a strong rags to riches story with plenty of obstacles and some ego-clashes along the way.

This production excels in casting lead actors who convince as the well-known stars they are playing. They have to satisfy not only a passing resemblance and similar vocal talents but also solid acting chops to boot. Thankfully, the interplay between the actors, from a script that offers plenty of witty banter, convinces us that they are band mates who have known each other for a long time. The dramatics, passion and neuroticism of Italian Americans is neatly captured, creating a crackling energy between the cast members.

The first part of the show is told from guitarist Tommy DeVito’s point of view, and Dalton Wood keeps him on the right side of funny rather than obnoxious and overbearing (it’s a fine line to walk given how larger-than-life the character is). Lewis Griffiths sensibly underplays Nick Massi, which makes the payoff of his occasional pent-up outbursts even more rewarding. Blair Gibson is a great contrast as the clean-cut and straight-laced Bob Gaudio. As Frankie Valli, Michael Pickering ably captures the unlikely appeal of a small and shy man who transforms into a star the moment he opens his mouth to sing. His excellent rendition of ‘Can’t Take My Eyes Off You’, a song that the show explains was very nearly not recorded, rightly drew gasps and applause from the audience for its power and authenticity. The well-earned moment is the definition of ‘show-stopping’.

Moving from their meetings in the early 1950s through to their worldwide success into the 1970s, before a fast-forward to their final performance in their original line-up, ‘Jersey Boys’ covers a lot of ground. In some ways, the show tries to pack in too much. The temptation is to keep the pace fast and furious, mirroring the temperaments of the artists involved, but this means lots of short and frantic scenes that, in combination, can leave the audience exhausted by its sheer unremitting speed.

I’ve never been a big fan of the ‘Chorus’ convention, where a narrator can break the fourth wall and tell the audience what’s going on. Although a device that aids lazy exposition, it has its place in theatrical traditions, but the trouble with using it is that it can constantly shatter the illusion. ‘Jersey Boys’ switches between narrators, which is probably an attempt to give every original band member their moment in the spotlight and a chance to tell their version of the story, but this approach needlessly muddles the telling of a clear narrative. Although plot points do come together, including problems with debt, marriages falling apart and a death in the family, the absence of a focal point sometimes make the scenes feel disjointed. Having said that, the second act is much stronger, and the reason for that is the relative tightness of the book.

Despite a few reservations about the structure of the show, ‘Jersey Boys’ is undoubtedly a thoroughly entertaining night at the theatre. If you love the music of Frankie Valli and the Four Seasons, it’s a thrill to see these best-loved hits performed live by talented actors and musicians. The period costumes, effective lighting and generally excellent design work ensure that the show is spectacular at all times. Best of all, all of the group’s most-loved hit musical numbers are included. Whether you love ‘Big Girls Don’t Cry’, ‘December 1963 (Oh What a Night), ‘Bye Bye Baby’, ‘Working My Way Back to You’ or many others, you’ll almost certainly hear it played with exquisite orchestral arrangements among the thirty-odd renditions that form part of the show. The striking and authentic performances and the memorable characterisations of modern music legends, rather than the story, is what you’ll take away and treasure from ‘Jersey Boys’.