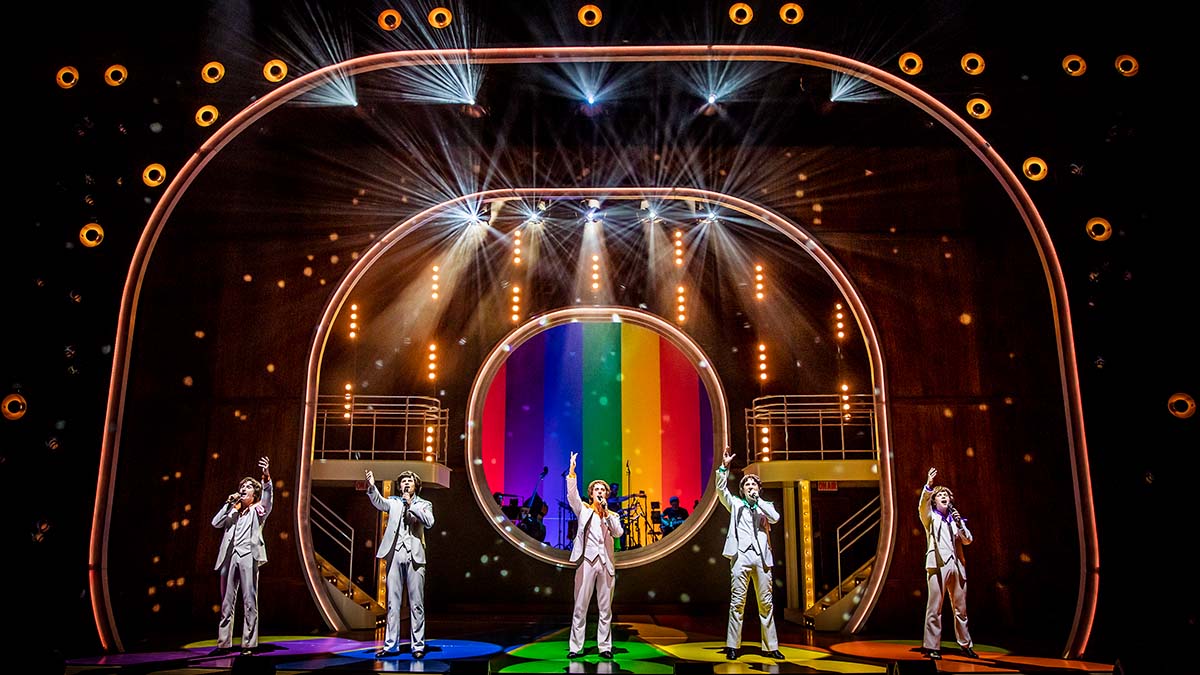 When anyone imagines the sounds of the Seventies, it’s likely that a hit by ‘The Osmonds’, whether that’s as a group, duo or solo artist, will feature in any shortlist of era-defining tunes. Although ubiquitous in popular music throughout that decade, the brothers rose to fame as a young barbershop quartet on ‘The Andy Williams Show’ in the 1960s. ‘The Osmonds – A New Musical’ charts the ups and downs of the siblings’ time in the public eye, from fresh-faced children through to a celebration of their fifty years in show business.

Told from the perspective of Jay Osmond (who developed the story), ‘The Osmonds’ follows the familiar route of similar jukebox musicals, such as ‘Beautiful – The Carole King Musical’ and provides audiences with sensational live performances of their greatest hits experienced through a biographical tale.

Thus, we see the boys in their home environment in Utah, being brought up by their strict, disciplinarian military father (a solid performance by Charlie Allen) and their warmer, nurturing mother (the excellent Nicola Bryan). The family relocates to Los Angeles when the boys win a studio contract, and as Jay wryly observes, they grew up on television. Once they become men, they take a new direction into popular music, persuading their old-fashioned father George (who is something like their manager) to trust their judgement. From there, they reach the big time as heartthrobs for teenage girls with hit single after hit single, winning international fame. Though as ever where the fickle finger of fame is concerned, their journey is anything but plain sailing.

‘The Osmonds’ captures with a sense of authenticity the pressurised atmosphere of a family who live and work together. Although close, there are rivalries and disputes, and each brother has his own problems to overcome. The musical, although undoubtedly sanitised to provide feel-good theatrical entertainment, doesn’t shy away from representing crises and tensions within the family. Although hardly scandal-hit, they are not, it turns out, quite as squeaky-clean and relentlessly cheerful as their public image suggests. The overall effect is to humanise them, leaving audiences with the impression of a family who worked hard for its success, and never lost a sense of humility when things went wrong.

Long-standing fans of ‘The Osmonds’ will undoubtedly love the musical. When Joseph Peacock as Donny Osmond broke into ‘Puppy Love’, ladies of a certain age in the audience couldn’t help but relive their teenage fantasies and throw themselves at him. To be fair, Peacock looks astonishingly like the character he’s playing, and he brilliantly captures Donny’s cheeky persona. There’s something about the music that has that effect too, and it is well-served by this production. Director Shaun Kerrison does an excellent job of keeping the pace up, using well the seductive youthful energy of the cast. All of the singers are good, but credit must go to Georgia Lennon, who is incredibly believable as Marie Osmond, and to Alex Lodge who narrates the whole show as Jay with unrelenting gusto. We also found Alex Cardall impressive as Andy Williams.

Although there is a lot to enjoy about the show, it doesn’t quite hang together as well as other jukebox musicals of recent years. Issues that the brothers raise as sounding pivotal in one scene are later resolved with a throwaway line, or quietly never mentioned again. The book could have done with a touch more tightening, especially as (including the interval) the running time is pushing three hours. Where it opens feeling like it will be Jay’s story, there is perhaps so much effort expended on giving each sibling their dues under the limelight that ultimately, the story feels unfocussed and the script a little bloated.

That said, taken as a celebration of a family who are phenomenally successful recording legends, ‘The Osmonds’ ticks more than enough of the right boxes. The show is colourful, inventive with costumes (we especially liked the 1970s-style jackets and shirts) and full of best-loved songs. A show-stopping moment in the first act was the rendition of ‘The Proud One’. The second act naturally builds up to a medley of greatest hits, with ‘Love Me for a Reason’, ‘Through the Years’ and ‘Crazy Horses’ competing for your attention. Every fan will have their favourite song. What’s important is that ‘The Osmonds’ has enough going in its favour to capture a broader appeal. If you love 70s pop music and showbiz stories, then ‘The Osmonds’ is one for you.