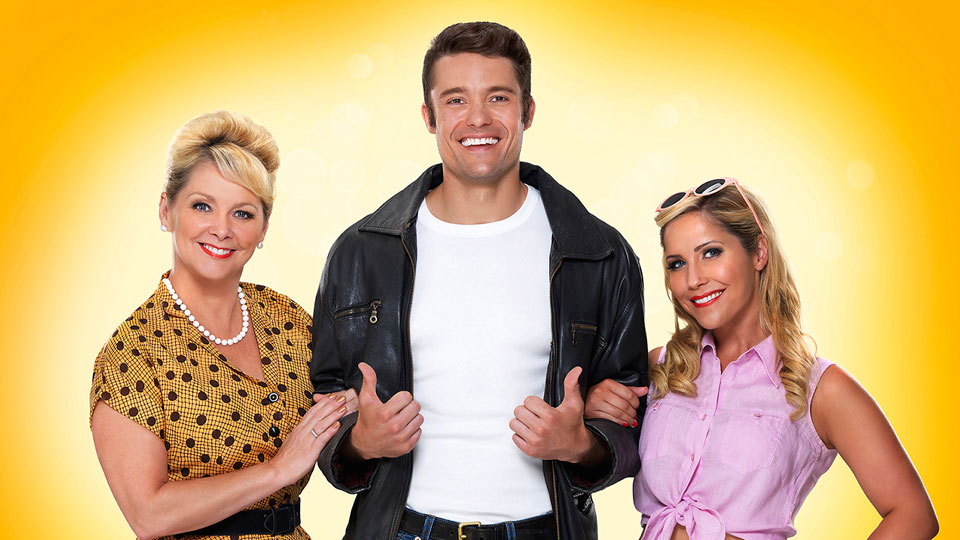 Happy Days is a show that has become iconic since it ended its 11 season run in 1984. Centred on Richie Cunningham (Ron Howard) and his family, the show presented an idealized version of the 50s and 60s. The show was a huge hit and made household names of stars Ron Howard and Henry Winkler who stole the show as Arthur ‘Fonzie’ Fonzarelli. Happy Days is getting new life now as a stage musical which has already enjoyed some success in the US during a 2007 – 2008 run at Connecticut’s Goodspeed Opera House and a 2009 – 2010 national US tour. Now the show has hit the UK and is running until this Saturday at the Churchill Theatre in Bromley before moving around the country.

Happy Days: A New Musical features a book by Garry Marshall, the man responsible for the original TV show, with music and lyrics from Paul Williams. The story picks up in 1959 as Richie Cunningham (Scott Waugh) prepares to graduate from high school and go off to college. Before he does he needs to assemble his family and friends to help save Arnold’s diner which is under threat of closure so it can be destroyed and a shopping mall built in its place. Richie along with Fonzie (Ben Freeman) vow to save the day with the help of Pinky Tuscadero (Heidi Range), an old flame of Fonzie’s who has returned to Milwaukee to host a dance contest. Can they raise the money they need and save Arnold’s?

Fans of the TV show will likely find much to enjoy with this stage version. All the characters you know and love are present, and the whole show is vibrant and colourful. Credit must be given to the show’s creative team for their wonderfully inventive set and the impressive use of lighting. The attention-to-detail in terms of the costumes and characters is impressive and you can tell the show has been put together by a team who truly loves the original TV show.

Unfortunately Happy Days isn’t without its issues. Part of the problem is that the pacing is uneven with a story so loose it’s at times barely there. The first half of the show suffers the most from the uneven pacing as lots of characters battle for stage time as it tries to establish itself. The songs proved to be a mixed bunch too. There were some real gems such as Pink’s In Town and Legend In Leather, both of which were led by Heidi Range, but many of the songs were forgettable leaving no lasting impression.

The show features some fantastic performances. Heidi Range, best-known for being one third of the Sugababes, is a revelation as feisty Pinky Tuscadero and we were impressed with both her singing and acting. Happy Days marks her first foray into musical theatre and she proved more than capable of holding her own. Emma Harrold made her mark too in the supporting role of Joanie Cunningham creating a believable chemistry with Eddie Myles’ loveable Chachi. Scott Waugh drove the show as central character Richie Cunningham really capturing the character from the TV show.

The show-stealer was a toss-up between Cheryl Baker as Mrs Cunningham and Henry Davis who played various roles including Count Malachi. Baker brought warmth and emotion to the stage and her performance of What I Dreamed Last Night with Emma Harrold was one of the highlights of the show. Davis on the other hand performed with gusto taking on several roles over the course of the show. Previously seen as Rocky in Rocky Horror Picture Show, Davis has a strong singing voice and a natural comedic charm best displayed when he’s playing Count Malachi.

We were disappointed by Ben Freeman’s portrayal of Fonzie. He lacks the charisma and effortless cool that Henry Winkler injected into the role and at times, particularly in the first half, his diction was poor meaning his lines were inaudible. His vocals were drowned out by the music too when he sang and were not as strong as we’d expect a leading man to be. We actually thought Henry Davis would have pulled the role off with much more conviction.

Happy Days: A New Musical has potential but if it’s hoping for a West End transfer following its UK tour it needs a tighter storyline and a rethink on some of the casting. Some of the songs could be cut from the show to make way for a little more exposition to give it a stronger and more cohesive storyline. We hope that the show is tweaked and evolved over time because there’s definitely something there but unfortunately it was a little lost in a hectic mix of uneven pacing and the lack of a strong storyline that made use of all its characters.

‘The Osmonds – a New Musical’ at Bromley Churchill Theatre