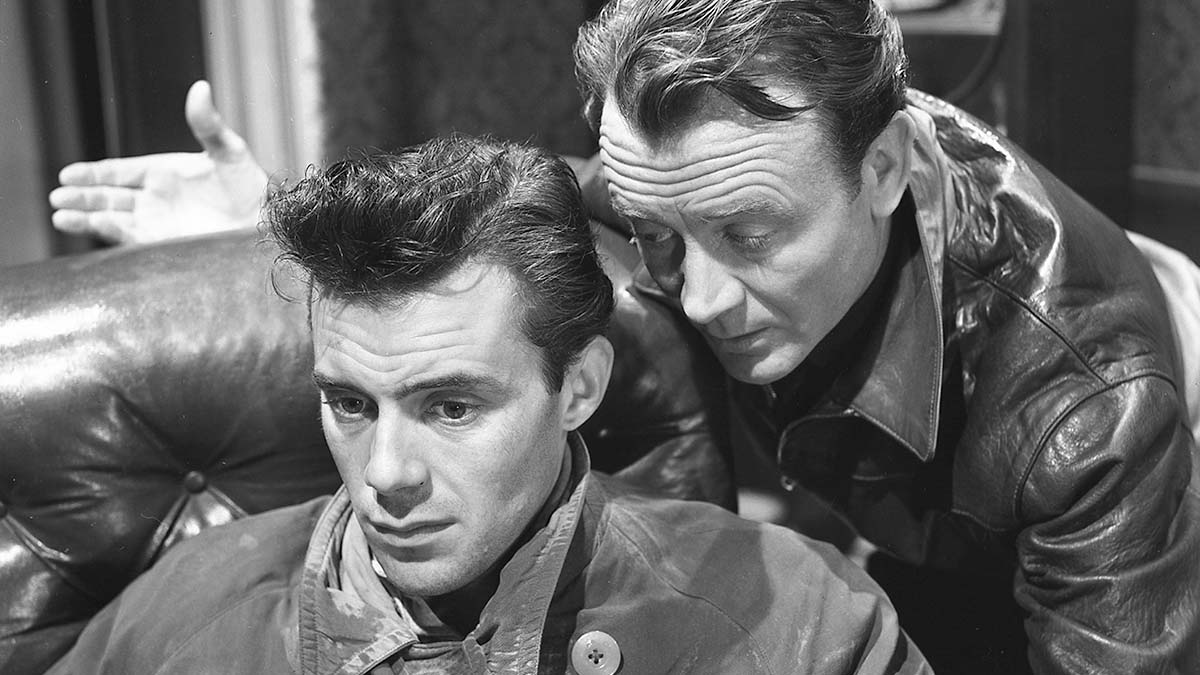 The problem with films that try to capture a period in history is often hindsight. Put simply, we can’t view ‘The Gentle Gunman’, a 1952 film about IRA operatives planting bombs in London, without knowledge of ‘The Troubles’ that were to follow, leading to much loss of British civilian life over three long decades.

The chances are that this film wouldn’t satisfy those with the strongest feelings on either side of the conflict, and comes across as naive or even sentimental to anyone in the middle. That said, it’s not without its curiosities, and lead roles for two of British cinemas brightest ever stars, John Mills and Dirk Bogarde, certainly go in its favour.

The screen idols play brothers in conflict. They have travelled from Ireland to London during the Blitz. Terence (Mills) has grown weary of terrorism as a method of fighting for Irish independence. His younger brother Matthew (Bogarde) is more hot-headed and idealistic, and is ashamed of what he sees as his brother’s betrayal. However, when tasked with leaving a bomb in the London Underground, Matthew has a moment of conscience when he sees children playing next to the ticking suitcase. This invites trouble on the family that follows them back to their native Ireland.

‘The Gentle Gunman’ came at a crossroads in Dirk Bogarde’s career. He’d already played a troubled young man for director Basil Dearden in ‘The Blue Lamp’ two years earlier, so in some ways he was an obvious choice for the part of Matthew. A couple of years later he would win the recurring role of Dr Simon Sparrow in ‘Doctor in the House’. His performance in ‘The Gentle Gunman’ seems to find him running out of steam playing rebels, and he spends much of the film sulking and angrily glowering, without finding a way to craft a compelling character. I say that as someone who has enormously admired his talent for over twenty years. It doesn’t help that his Irish accent is woefully bad, though nowhere near as off-target as John Mills’ distractingly odd attempt. Much of the rest of the cast are from genuine Irish or Northern Ireland backgrounds, and they supply the veracity that is missing from the leads.

However, it isn’t merely the stars’ accents that don’t ring true. There is an attempt to add some levity to a heavy piece by bookending it with a gentle rivalry between the Irish Dr Brannigan (Joseph Tomelty) and the British Henry Truthome (Gilbert Harding). The resulting broad stereotypes flatter neither nation and raise few smiles.

Despite our misgivings over the authenticity of the era the film depicts, it is not without its successes. The locations are well-chosen and look rugged in crisp black and white. Although the plot is a little muddled, it nevertheless engages viewers for an hour and a half. It also successfully presents difficult moral dilemmas and issues such as national sovereignty in ways that are accessible to a wide audience. Director Basil Dearden for the most part keeps the action tight. Some sequences, especially those based in the London Underground at the start of the film, are tense and expertly-handled.

Although neither star would have been likely to relish talking about the film in later interviews, it’s always time well-spent when you’re in the company of legends like John Mills and Dirk Bogarde. The latter was at his most devastatingly handsome. On Blu-ray, the picture quality is impressively crisp, and there is great contrast between the light and shadows.

A half-hour extra on the disc is a closer look at ‘The Gentle Gunman’ with film writers Matthew Sweet and Phuong Le, who cover a lot of ground and provide some intriguing background information about the making of the movie.