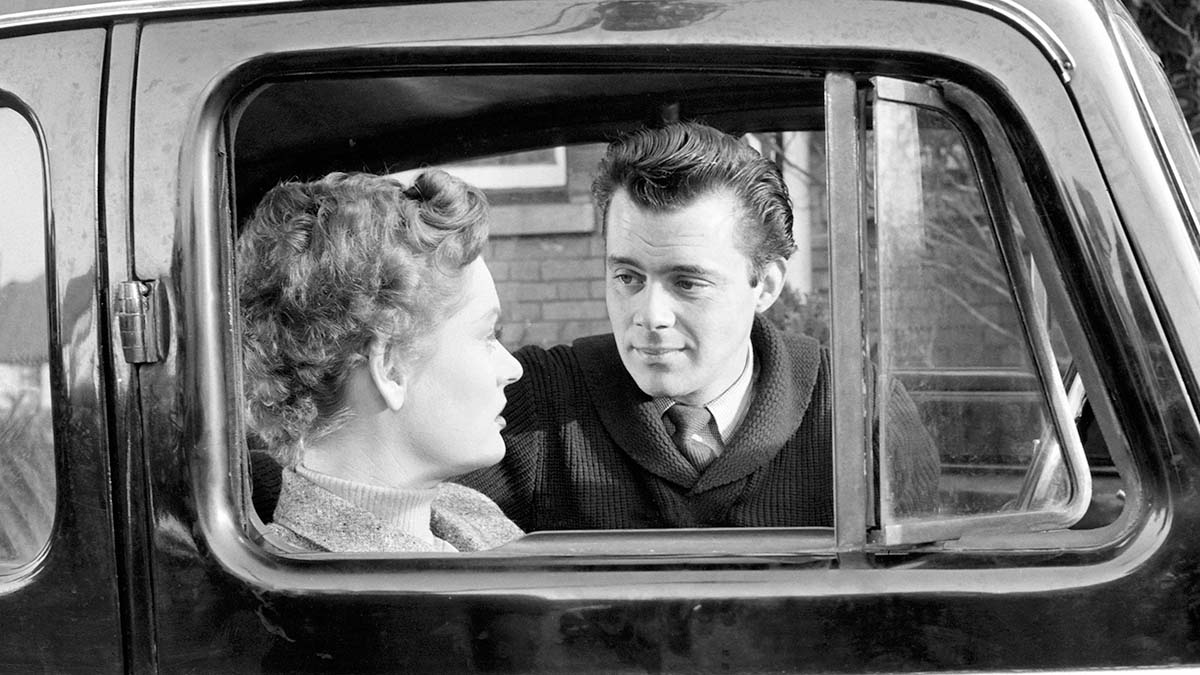 ‘The Sleeping Tiger’ is a 1954 psychological thriller and film noir that came during Dirk Bogarde’s matinee idol phase. This title sees him playing the angry young man that he had done so convincingly in ‘The Blue Lamp’ and ‘The Gentle Gunman’. Aged 32 when the film was made, Bogarde was too old to play juvenile delinquents, but his part as a violent fugitive in Charles Chrichton’s ‘Hunted’ in 1952 brought him acclaim. That film would be seen by a certain blacklisted American director who had fallen fowl of the McCarthy witch hunts for his Communist sympathies. Working in Europe, he would strike up a remarkable collaboration with Dirk Bogarde, and ‘The Sleeping Tiger’ is where it all started…

Watching ‘The Sleeping Tiger’ now, it’s immediately clear that, for a British film of the era, it is a cut above much of the rest. From the opening sequence, in which Dirk Bogarde and his friend Harry Towb hold up a professional psychiatrist (Alexander Knox) at gunpoint, the movie is full of tension, atmosphere, and slick direction. The performances feel alive from the first minute, rather than coming to life part-way through as was so often the case. It feels like a work of art rather than a low-budget potboiler. The reason that the film is classy is that it is directed by Joseph Losey, who would go on to collaborate with Bogarde on memorable titles including ‘Accident’ (1967) and, best of all, ‘The Servant’ (1963). From the opening credits, you wouldn’t know that you were watching a Losey film as he had to keep a low profile owing to his Hollywood blacklisting.

Bogarde plays Frank Clemmons, a young middle-class man with an inquiring mind who has taken the wrong path into violent crime. After holding the psychiatrist Clive Esmond (Alexander Knox) at gunpoint in a failed mugging, Esmond takes the young man into his home for six months to try to break down his barriers and understand why he turned to criminality. In order to get through to him, Esmond has to show Clemmons no weakness or emotion, only patience. But it is a dangerous game to play, because when Esmond isn’t looking, Clemmons embarks on a mission to intimidate his housemaid Sally (Patricia McCarron) and seduce his wife Glenda (Alexis Smith). In the race against time for Esmond to achieve the professional distinction of a breakthrough with his patient, innocent young women face being mortally hurt.

The ebb and flow of the changing relationships within the Esmond household play out with a degree of predictability, but at the same time, ‘The Sleeping Tiger’ is full of satisfying twists and turns that keep the viewer guessing and on tenterhooks. The film is psychologically satisfying, too. Clemmons and Glenda have the measure of one another from the very start, and a simple exchange over the lighting of a cigarette is superficially hostile, but fraught with palpable sexual tension. It’s hard to know who to sympathise with. We see that Clemmons is a manipulative liar, and that in leading Glenda astray, she is betraying her husband and threatening her marriage. At the same time, it’s professional pride rather than adequate care and compassion for his wife that drives Esmond to willingly invite a clearly malign influence into his household in the first place. The fascination is in watching to see how far each character will go, and how deeply they will hurt another in the process. ‘The Sleeping Tiger’, replete with psychobabble that it may be, is a convincing study of the darker side of human nature rarely examined with this level of frankness in British cinema before the 1960s.

With a satisfying script and masterful direction, the performances are all top-notch too. At this stage of his career, Bogarde had rarely been better. Nobody glowered on screen quite as well as he did, and he was already well-versed with playing broken young men holding at bay a torrent of emotion. What he adds in ‘The Sleeping Tiger’ is an animalistic confidence and swagger, that he is clever and talented enough to show cracks in, allowing the audience to know that his tough exterior is merely a charade. His chemistry with Alexis Smith is compelling, and she too signposts the weakening of her defences and her break from a rigid life of dull marital comfort to falling for the temptations of a dangerous stranger with consummate skill. Almost recognising the need to allow the two leads to give the showiest performances, Alexander Knox underplays every scene he’s in, but he is measured and solid.

Look out too for a host of great British acting talent in supporting parts. There’s Hugh Griffith as the police inspector, Harry Towb as Bogarde’s partner in crime, Billie Whitelaw as a receptionist and the dependable Glyn Houston as the housemaid’s unhappy fiancé. The scenes in the nightclub allow for haunting jazz music to aid Clemmons in his seduction of Glenda, enjoyably enhancing the soundtrack.

‘The Sleeping Tiger’ runs to just under an hour and a half and is a breathless gallop, keeping the pace high and the plot forever twisting. It isn’t faultless. There is an implied affection that Esmond’s assistant Carol (Maxine Audley) has for her employer, and to have given that screen time would have added another layer of intrigue for the story, as well as given Audley a more rewarding part. The use of a tiger in artwork in the climatic sequence is also a touch heavy-handed and unnecessary, but it doesn’t diminish the final punch that the film has to offer. Overall, this tight, gripping, clever and brilliantly-performed psychological thriller has much to recommend it. For Losey and Bogarde, it was the start of a special and highly productive professional relationship.

Extra features include a half-hour interview with Bogarde’s official biographer, John Coldstream, who gives an overview of why Bogarde agreed to work with the blacklisted director, as well as a slightly shorter roundup of the movie’s significance by omnipresent film historian Matthew Sweet. Restored for Blu-ray, the black and white print looks better than ever before. You can see every five o’clock shadow hair on Dirk Bogarde’s chin in close-ups. All the better for reading every thought in his character’s mind.