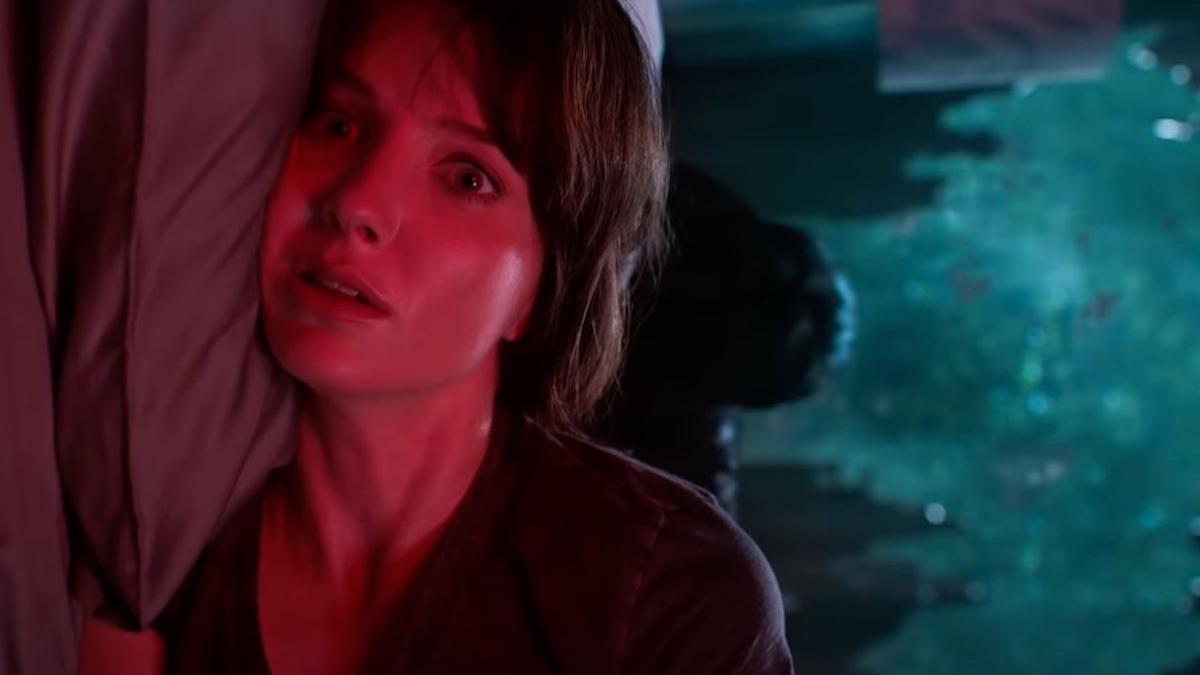 James Wan swings for the fences, and then some, in this absolutely bonkers homage to 80s body horror. ‘Malignant’ is a horror film with the brakes off. Holding absolutely nothing back, Wan has delivered the maddest, and without a doubt, the most fun mainstream horror film of the year. It’s by no means perfect, with huge plot holes, and it breaks its own internal logic on countless occasions, but none of that really matters. In the ‘safe bet’ era of studio filmmaking in which we now live, I am both astonished and delighted that this film exists.

Annabelle Wallis—sporting a huge black wig—is Madison, a young pregnant woman stuck in an abusive marriage. When an argument gets physical, her husband smashes her against a wall, splitting her head open. She locks herself in the bedroom room for her own safety, but during the night, an unseen intruder breaks into the house and violently murders her husband. She wakes to find him dead, but the killer is still in the house, and attacks her. She survives, but loses the baby.

In the aftermath of the assault by her husband and the attack by his killer, Madison begins to experience horrible visions of murders as they happen. Meanwhile, a police investigation into this spate of killings leads them to believe it might all be connected to something from Madison’s childhood. Something terrible which she can no longer remember. If you’ve not seen it yet, to say anymore would ruin all the fun.

I feel like I’ve been saying this a lot recently, but once again this is not the film the trailer promised you. And I’m fairly confident that this misleading marketing is the main reason ‘Malignant’ was received in such a lukewarm manner. If you turn up to the cinema thinking you’re about to watch a film like ‘The Conjuring’ but then end up watching ‘Basket Case’ you’re inevitably going to feel a bit confused.

But James Wan has done the haunted house genre to death. Whilst there is no doubt he is being referential to the films he loves here, this is something completely original. A genre-bending giallo thriller, ‘Malignant’ takes elements from serial killer movies, cop movies, 80s action, supernatural horror, and splices them together to create this Frankenstein’s monster of a film. A pulpy melodrama, full of blood and guts, that is at times laugh out loud funny (intentional and unintentional) and also contains one of the best action scenes of the year.

To get an idea of the tone of the film, the opening shot is a gothic hospital perched on the edge of a cliff, shrouded in spooky mist. By the final act, the pitch is near histrionic. There is nothing subtle about ‘Malignant’, but the fact it is all played with a poker straight face makes it work. And also makes it funnier.

From a technical perspective, the film is yet another triumph for Wan. His level of craft is impeccable. There are few directors who can match his skill when it comes to composing horror. With ‘The Conjuring’ and ‘Insidious’ franchises it was all about negative space and the creeping suggestion of a malignant presence. In ‘Malignant’ however, it is all about exquisitely executed B-movie carnage.

The blu-ray release comes with only one special feature, which is a great little behind the scenes documentary. There’s lots of footage from the set, as well as James Wan talking in depth about his inspirations, and his desire not to make the same film again. There’s also interviews with the main cast and key creatives, a look at the amazing prosthetic work, and some incredible footage of the contortionists rehearsing to create the freaky movement style of the killer. It’s a pity there isn’t a few more bonus features on the disc.