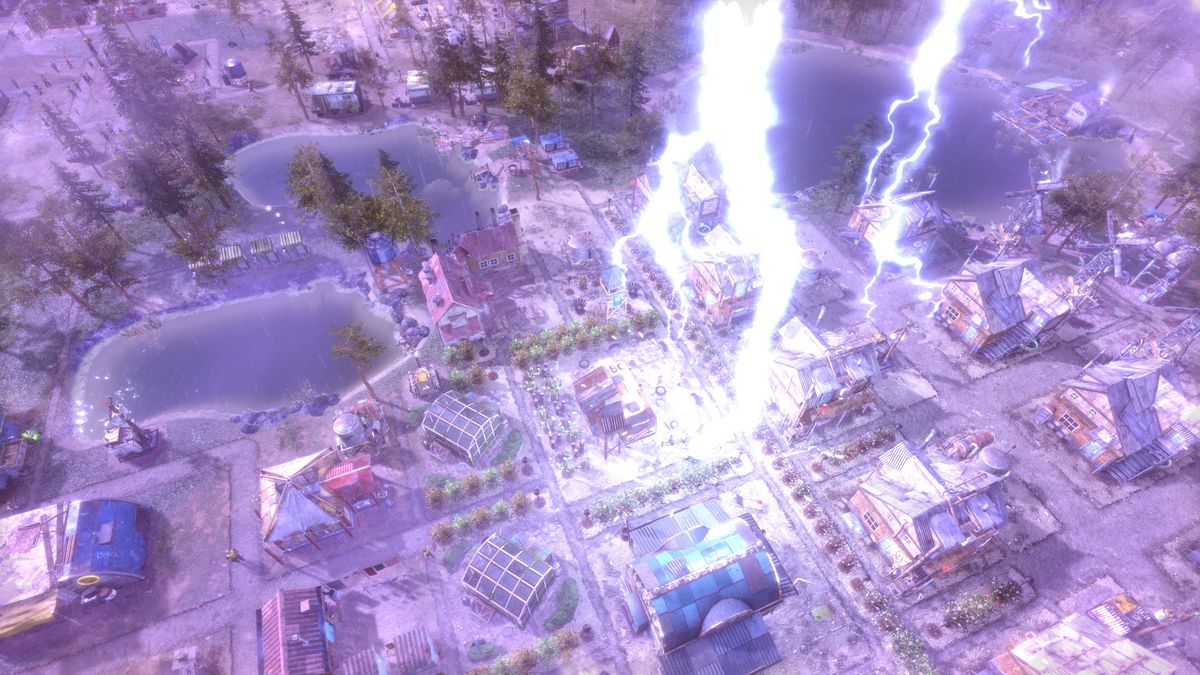 Surviving the Aftermath came out recently and it’s a really strong addition to the survival city builder genre. If you want to find out more about what we thought be sure to check out our review.

As with any game like this, you will come across many pitfalls, especially in your early game so I’ve pulled together some tips for you to ensure you get the best start and avoid some of the mishaps that befell me.

Get you water supply sorted now!

On my first playthrough, I presumed I would have a little bit of time before I started losing colonists. I was very wrong and as I hadn’t made water my first priority everyone was dead by day two. In short, you need to ensure that building a water supply is the first thing you do. You’ll start with a small amount of food in your town centre but won’t have any water.

It’s easy enough to put down a water collector early on and this should serve you well enough for a while but don’t forget to increase your production with wells and more collectors as you progress. You’ll also need to build lots of water storage to see you through the disasters.

Fish go brrr when it comes to trading

Once you’ve researched and built the trading post and discovered another settlement on the world map you’ll be able to start trading. I found that fish were incredibly valuable and also very easy to produce. Set up as many fishing piers as you can and when researched build yourself a fish farm or two. Not only can the fish be used in your cookhouses or mess halls to feed your colony you’ll also have a readily available trade resource to swap for the things you really need.

As its name suggests, rare metal is very hard to come by but is needed in order to produce components and microchips for more advanced buildings. I have only ever found rare metal on the world map twice so far. One find was purely a ruin that happened to have some but the second was in a place that allowed me to build a scavenging outpost meaning I had a steady supply.

To this end, I encourage you to explore as much of the world map as possible in order to find your own place to build an outpost.

Components become vital in the mid to late game but can be very tricky to find. You will definitely find some whilst exploring the world map but it can be hard to establish a steady supply. Trade is a great way to get hold of these items and once you’ve uncovered enough competing towns you’ll find that there is always at least one with components to spare. If you want to make your own you’ll need to build an electronics factory and have a steady supply of rare metals.

There will be plenty of times during your playthrough where you’ll feel like you don’t have enough people. To help alleviate this a bit make sure that you don’t have people sitting idle in buildings that aren’t being used. Great examples of this can be leaving people in your medic huts just in case or manning your gate. You don’t need people in these buildings all the time and the game gives you plenty of notice if you’re going to be attacked or if people are sick.

Herbs can only be grown in the greenhouse

Discovering this one was a revelation. In order to make your own medicine, you need a steady supply of herbs. I set about putting down fields I could grow these herbs as I was sure I’d already unlocked the herb seed but the herb wasn’t an option and I presumed I was wrong about unlocking the seed. This lead to lots of frustration until I build my first greenhouse only to find herbs as a planting option ( this was hours later! ).

In short, if you want to grow herbs, build yourself a greenhouse or two beforehand

You can put limits on production

I didn’t notice this for a while but you can set limits on your production buildings. This is useful as once you reach the limit you have chosen, the people in the building will automatically leave and become carriers or builders until they are needed once again. When they are needed they will return to the building on their own removing a fair bit of micromanagement for the player.

Explore the entire map with specialists

The world map is full of things to discover and loot to bring back to your colony. You can also set up various outposts in order to gather resources, attract new settlers or become more efficient when exploring the world. To begin with I would start building science outposts so that you can start unlocking and upgrading buildings. After this, I would be looking for tools and clothing production.

The world map is also the only place that you’ll be able to discover rare metals and new colonies to trade with making it vital you uncover every area of the map. Scout specialists are best for this task as they have a greater movement range per turn.

The game encourages you to build lots of guard towers but I haven’t really had much need for them. They are useful if your gate gets breached so it’s worth having a few nearby but other than that I wouldn’t bother too much with them.

If you do get attacked from within your camp I found it much more efficient to use any specialists that were around to mop up the danger.

Use scout towers to reveal map but destroy once used

You will need to place scout towers around the perimeter of your colony to remove the fog of war that surrounds it. Doing this will reveal more building space and much-needed resources. Once built the towers will take a few minutes to reveal the land around them but after this, they serve no purpose and take up a colonist.

Once the tower has done its thing make sure you go back and destroy it which will free up some resources and also a very valuable colonist. Forgetting to destroy them can lead to having lots of colonists tied up and contributing nothing.

In this article:Iceflake Studios, Paradox Interactive, Surviving The Aftermath