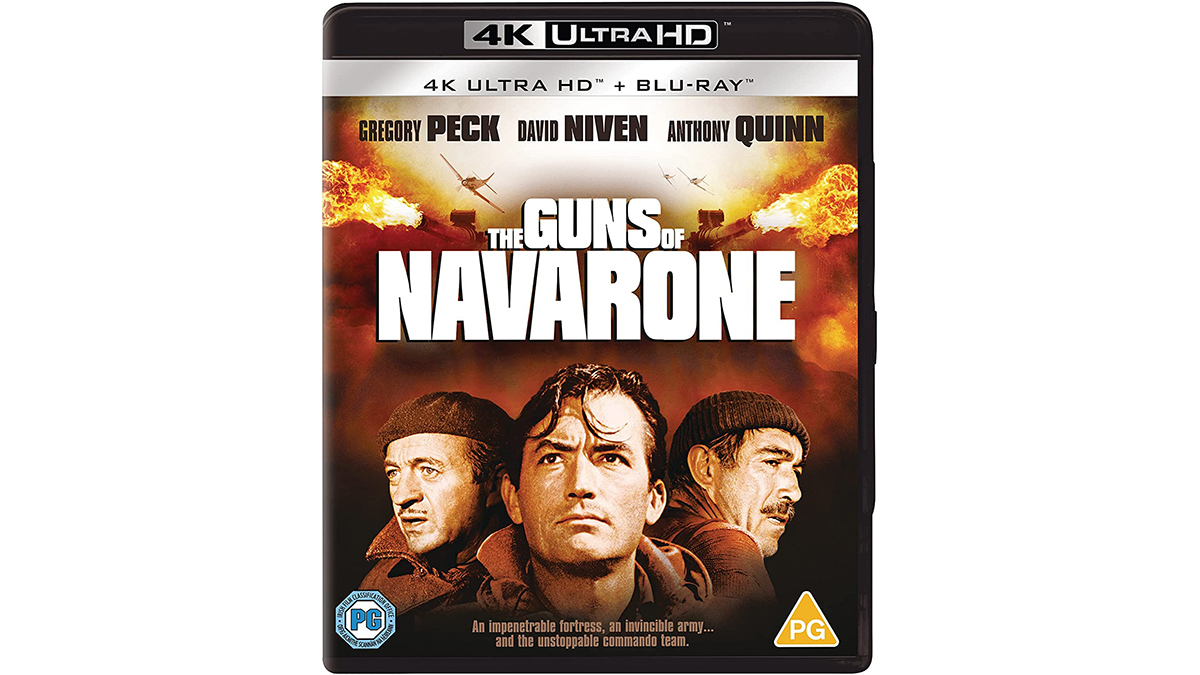 Epic 1961 World War Two classic ‘The Guns of Navarone’ has arrived on 4K Ultra HD and Blu-ray to celebrate its 60th anniversary. A staple of Sunday afternoon viewings for generations of (mostly) young men, the heroics of the crack band of specialists dispatched to destroy the Nazi’s largest weapons hidden high up on an island’s cliff face continues to enthral audiences to this day.

A stellar cast combines with two and a half hours of unrelenting action and adventure to produces a ‘Boy’s Own’-style war story that has stood the test of time. The lead actor is Gregory Peck (‘To Kill a Mockingbird’), who plays Captain Mallory. He is tasked with landing a commando unit on Nazi-occupied Navarone island, where the only unguarded side has a sheer cliff face. If their mission fails, the naval fleet dispatched to rescue stranded Allied troops will be sunk by the large-calibre guns built into the cliff face. Supporting him is Colonel Stavrou (Anthony Quinn from ‘Lawrence of Arabia’ and ‘Zorba the Greek’), explosives expert Corporal Miller (David Niven), engineer Brown (Stanley Baker) and Major Franklin (Anthony Quayle).

The movie is based on Alistair MacLean’s 1957 novel of the same name, and although the mission it describes is fictional, it is plausible. Each character brings their own strengths and foibles. Peck is cunning and fundamentally decent; Stanley Baker struggles with the violence of war and wants to avoid bloodshed; Quinn has baggage from the past that means he’s sworn to kill Peck just as soon as the war is over; Niven is sarcastic, and so on. The characters play against each other brilliantly as set-piece moves to set-piece. At first, their tiny fishing vessel is destroyed in a storm. Having survived that, and climbed up the cliff face, they then have to carry the injured Major Franklin. They must face the moral dilemma that if they take him, he will slow them down, and if they leave him, he could tell the Germans about their mission under torture, and if they shoot him, they become as bad as the Nazis. Other familiar elements are thrown in as the intrepid heroes are rounded up by Nazis and escape, then discover a traitor in their midst. ‘The Guns of Navarone’ has all the essential ingredients of a great wartime action movie.

The high-profile actors are given their moments to shine. The tension and rivalry between Peck, Quinn and Niven creates the drama that sustains the film. The supporting cast is good too. Walter Gotell, later famous as General Gogol, head of the KGB in many Cold War-era James Bond films, plays a sympathetic Nazi, and Irene Papas and Gia Scala provide an element of romance. Look out also for Richard Harris, who plays a foul-mouthed Australian pilot – his star was very much in the ascendancy at the time. Distinctive Greek filming locations (that weren’t a whole lot different only a decade and a half after the end of the war) add greatly to the success of the movie, rooting it in a particular setting and culture.

This new edition of ‘The Guns of Navarone’ presents the movie in 4K from the original camera negative. The picture quality is stunning, vividly picking out the deeper colours like the reds. Some reels look grainier than others, which relates to lower lighting levels. This is more obvious when the picture quality has been upscaled, but overall, it’s worth it to relive a much-loved classic in greater definition than ever before. Where the extras are concerned, there is the option to play the feature with or without the original intermission card, as well as some sketches from the main titles and an original theatrical trailer.

I thoroughly enjoyed reliving and revisiting a childhood favourite. ‘The Guns of Navarone’, with its great model work and unrelenting high stakes, is a family-friendly feel-good epic with an all-star cast. It is unashamedly male-driven and offers ethical dilemmas among its good moral core. This release is likely to appeal to all of those who have always loved the movie, as well as fans of classic war movies. They simply don’t make them like this any more.